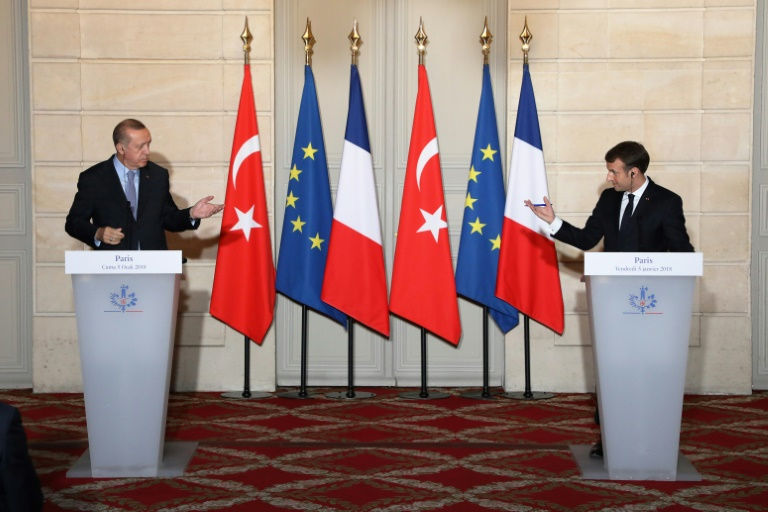 At a testy joint press conference following talks in Paris, Turkish President Recep Tayyip Erdogan said Turks were sick of waiting to join the European Union after half a century.

"For relations with the European Union, it is clear that recent developments and choices allow no progress in the process," Macron said.

"I'd be lying if I said we could open new chapters," he said in reference to the accession process.

Ankara was hoping to warm frosty relations with Europe during Erdogan's trip, but the talks were overshadowed by concerns over Turkey's huge post-coup crackdown and the arrest of journalists.

Neither Macron nor Erdogan hid their pessimism over the state of Turkey's long-running bid to join the EU.

"We have had a very honest discussion on this subject," Macron told reporters, saying both sides needed to leave "hypocrisy" behind in pretending the process was moving forward normally.

"I hope we can take up a peaceful dialogue that would allow us to build a relationship which is essential in my eyes, both for ourselves and for the region," Macron added.

Turkey has been seeking to join the EU for decades, but leaders both at home and in Europe have expressed increasing doubts over the progress following mass arrests and sackings after the failed coup in 2016.

Over 140,000 people have been sacked or suspended, accused of links to the movement run by US-based Muslim cleric Fethullah Gulen, who is accused by Ankara of orchestrating the attempted coup.

More than 55,000 officials, security force members, judges, academics, journalists and activists have been arrested since the coup, which has been accompanied by a crackdown on pro-Kurdish activists.

For his part, Erdogan said the wait for EU membership was becoming "exhausting" for Turkish citizens.

"Turkey has been waiting in the EU antechamber for 54 years. When it comes to saying why, the EU is not really capable of giving reasons."

Turkey is currently blocked on 35 "chapters", or policy areas, of the negotiations, he added.