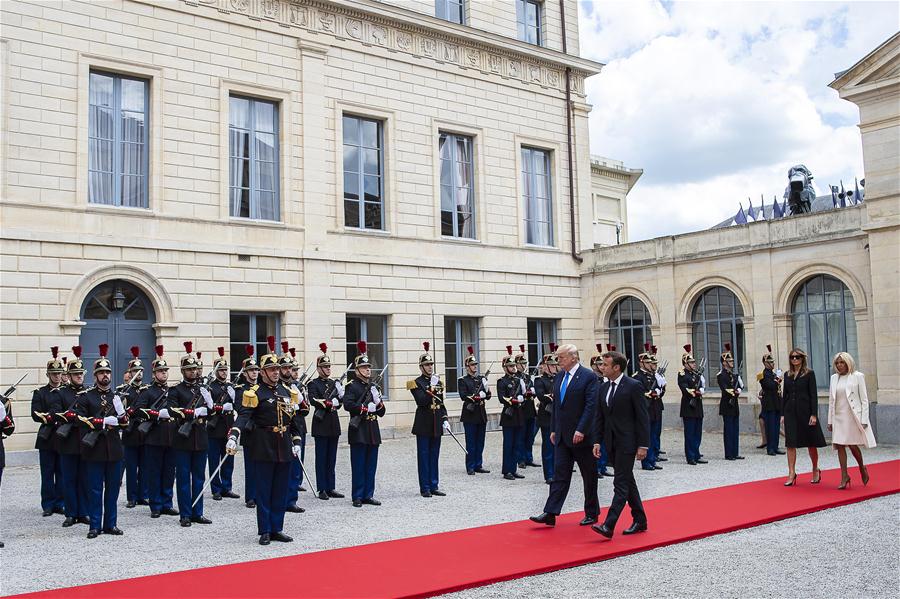 At Omaha Beach, one of the five landing spots in Normandy and where the US cemetery lies, Macron expressed deep gratitude to those who fought on June 6, 1944, telling the surviving American veterans: "France will never forget."

"Today France has not forgotten those fighters for whom we owe our freedom. On behalf of France I bow down in front of their bravery. I bow down to our veterans and I say thank you," he said.

He commended the "incredible courage, the generosity, which the American soldiers showed" and the "strength of soul ... that leads them to help men and women they did not know and to liberate a land they had never crossed."

Under the watch of US President Donald Trump, Macron awarded the Legion d'Honneur, France's highest award for merit, to five US veterans.

Addressing some 12,000 participants in Colleville-sur-Mer where more than 9,000 American soldiers were buried, Trump honored "these men (who) moved through the fires of hell."

"They came here and saved freedom, and then they went home and showed us all what freedom is about," Trump said.

"On this day 75 years ago, 10,000 men shed their blood and thousands sacrificed their lives for their brothers, for their countries and for the survival of liberty. Today we remember those who fell and we honour all who fought right here in Normandy," he added.

During the ceremony, the two leaders laid a wreath and observed one minute of silence before having warm talks with veteran soldiers.

At an earlier memorial event in the day, Macron inaugurated with British Prime Minister Theresa May a memorial site, in Ver-sur-Mer, to pay tribute to 25,000 British soldiers who landed on Gold Beach in the summer of 1944 "to liberate France from the barbarous yoke of the Reich," as Macron noted.

"This memorial is the symbol of the links between the United Kingdom and France and nothing will ever erase these links made of bloodshed..." he said.

In her last major international event before quitting office, May paid tribute to the "raw courage" of soldiers who had been engaged in "one of the greatest battles for freedom this world has ever known."

"If one day can be said to have determined the fate of generations to come, in France, in Britain, in Europe and the world, that day was the 6th of June 1944," she said.

In other ceremonies, Britain's Prince Charles and his wife Camilla along with veterans paid their tribute at Bayeux War Cemetery where more than than 4,000 British and Commonwealth troops are buried.

At Juno Beach, Canadian Prime Minister Justin Trudeau joined participants, including Canadian and French school children for a memorial ceremony to honor 14,000 Canadian soldiers who landed in Normandy in June, 1944. More than 5,000 had been killed.

Wreaths, parades, parachute-landings and fireworks will be staged to mark the D-Day landings and the Battle of Normandy 75 years ago when US, British and Canadian troops waded ashore to confront Nazi forces, hastening its defeat during the World War II.