WORLD Made in Fukushima 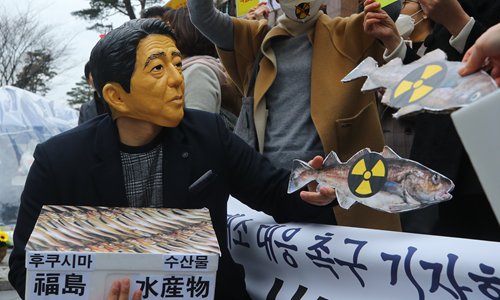 South Koreans protest the import of produce from Fukushima in front of the Japanese Embassy in Seoul, South Korea on March 19. (Photo: IC)

The pumpkin is diced, the chicken carved and the eggs beaten into an omelette, but the people preparing the food are not chefs - they are scientists testing produce from Japan's Fukushima region.

More than 205,000 food items have been tested at the Fukushima Agricultural Technology Center since March 2011, with Japan setting a standard of no more than 100 becquerels of radioactivity per kilogram (Bq/kg).

In the last year, the center says no cultivated produce or farm-reared livestock has exceeded the government's limit.

In all just nine samples out of tens of thousands were over the limit: eight from fish bred in inland ponds, and one a sample of wild mushrooms.

Each day, more than 150 samples are prepared, coded, weighed, and then passed through a "germanium semiconductor detector." Rice undergoes screening elsewhere.

While radiation affected several regions which have their own testing processes, Fukushima's program is the most systematic, testament to the particularly severe reputational damage it suffered.

In the wake of the nuclear disaster, a wide-scale decontamination program has been carried out in Fukushima.

It can't be done in forests, where thick tree growth makes it impractical. But elsewhere topsoil has been removed, trees washed down and potassium sprinkled to reduce caesium uptake.

But the testing process is the cornerstone of efforts to win consumer trust.

'Our products are safe'

"Some people are still worried, in Japan and abroad, so we want to continue to explain to people in other prefectures and in foreign countries that our products are safe," said Kenji Kusano, an official at the testing center.

And occasionally radioactivity is detected, for example in wild plants and mushrooms, which are destroyed if they exceed the government standard.

"When residents come back to areas that are off-limits at the moment and start producing their own fruit and vegetables, they must be tested," he said.

"Profits have not yet reached pre-2011 levels and prices remain below the national average," said Fukushima representative Nobuhide Takahashi.

The situation is even worse for fishermen, many of whom have survived only on compensation paid by Fukushima operator TEPCO.

The tsunami destroyed ports across the region and demand is low despite an even stricter testing standard of 50Bq/kg for Fukushima's seafood.

"When we catch fish and send it to market in Tokyo, some people don't want to buy it," said Kazunori Yoshida, director of Iwaki's fishing cooperative.

The problem remains one of perception, despite the fact that independent testing confirms what government labs show.

The Minna no Data (Our Data) NGO carries out its own testing and spokesman Hidetake Ishimaru said the group was "very surprised" by the "mostly very low levels" it found in Fukushima produce.

At the international level, there has been some progress: 27 countries of the 54 that imposed restrictions on food from Fukushima after 2011 have now lifted those bans.

And another 23 markets, including the United States and European Union, have relaxed restrictions, though some regional neighbors including China and South Korea have kept bans in place.

And experts say the government's science-based approach has done little to convince people.

"Nobody believes, just by shouting safety," said Katsumi Shozugawa, a University of Tokyo professor who has studied Fukushima food safety.

He said government testing was appropriate, but attempts to convince consumers remained "poor."

Tomiko Yamaguchi, sociology professor at Tokyo's International Christian University, said some consumers were torn between fear over Fukushima produce and solidarity with residents there.

"People can't talk about these things. It's almost like a taboo," she said.

"But regardless ... if you are very concerned for your children, it doesn't matter if there's scientific evidence or not."

On a farm in Fukushima where peaches hang ready to be picked, 14th generation farmer Chusaku Anzai said he was resigned to the situation.

"There's no point wasting our energy trying to convince those who don't want our products," the 69-year-old said, his face worn by five decades of farmwork.

"We can't do anything but wait for them to change their minds."