They're far from floral, but fungi could be just what the doctor ordered for bees, according to a study that shows mushroom extracts could protect against viruses decimating bee populations. 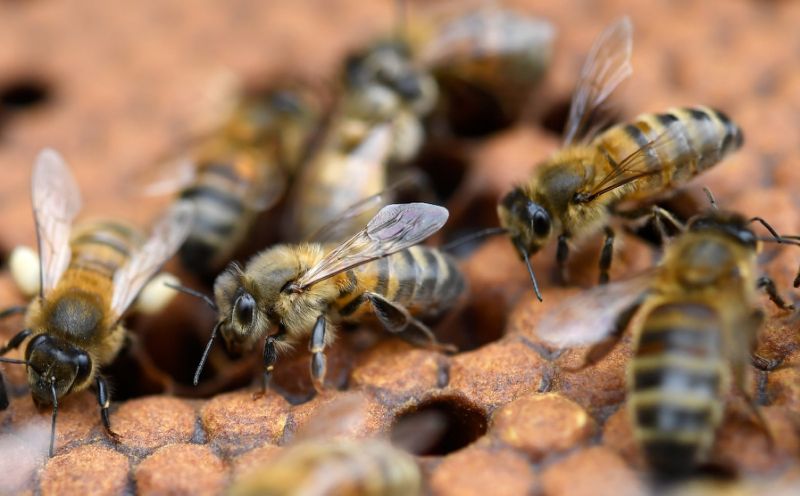 The UN warned last year that bees were at risk of global extinction -- but new research suggests fungi extracts could effectively inoculate bees against some of the most devastating viruses attacking them (Photo: AFP)

"Colony collapse disorder" -- or massive die-offs of bees -- has caused international alarm in recent years, with experts blaming mites, viruses and pesticides for the phenomenon.

The UN warned last year that nearly half of all insect pollinators, particularly bees and butterflies, were at risk of global extinction.

Some countries have already moved to ban certain pesticides, and beekeepers use poisons to tackle mite infestations that can take out whole colonies.

But new research published Thursday in the journal Nature Scientific Reports suggests fungi extracts could effectively inoculate bees against some of the most devastating viruses attacking them.

The research was inspired by the observation that honeybees appear to feed on fungi in the wild, and a "growing body of evidence (that) indicates honey bees self-medicate using plant-derived substances", the study says.

Mushroom extracts are already used against several viruses in humans and the authors reasoned fungi might have similar properties for bees.

"Previous anti-viral results of mushroom extracts when tested on human viruses suggested that this would be a promising line of research," co-author Walter Sheppard, a professor at Washington State University's entomology department, told AFP.

The researchers started by narrowing down which fungi they would feed their test bees, eventually focusing on amadou, a spongy material produced by hoof fungus, and reishi, a fungus that grows in shelf-like formations on trees.

The study looked at whether the extracts could protect bees from two viruses that have proven particularly devastating to the industrious insects: deformed wing virus (DWV) and Lake Sinai virus (LSV).

Initial tests were run on caged bee populations in laboratories, with one group receiving the mushroom medicine and another a plain sugar syrup solution.

Testing then moved outdoors, where the researchers created 30 colonies, each with a queen and around 8,000 worker bees, allowing all the bees to feed freely.

They provided some of the foraging bees with their mushroom extract, and gave the others the sugar syrup, finding the dosing reduced DWV 79-fold and LSV a whopping 45,000-fold compared to the control groups.

Sheppard said the discovery was a promising result with potential real-world application for beekeepers looking to protect their colonies.

"The material is well-suited to use by beekeepers, as the method of application... is already widely used by the industry to provide supplemental nutrition," he said.

Sheppard and his colleagues are already pursuing additional research based on their initial findings, including further investigation into how the fungi extracts work.

"We will conduct experiments to tease apart whether virus levels are reduced through direct anti-viral activity of the extract or through improving immune function in the bee," he said.

Sheppard said the team was also "working to develop and refine application methods", including testing how to offer the treatments on a large scale and tinkering with just how much mushroom "medicine" bees should receive.