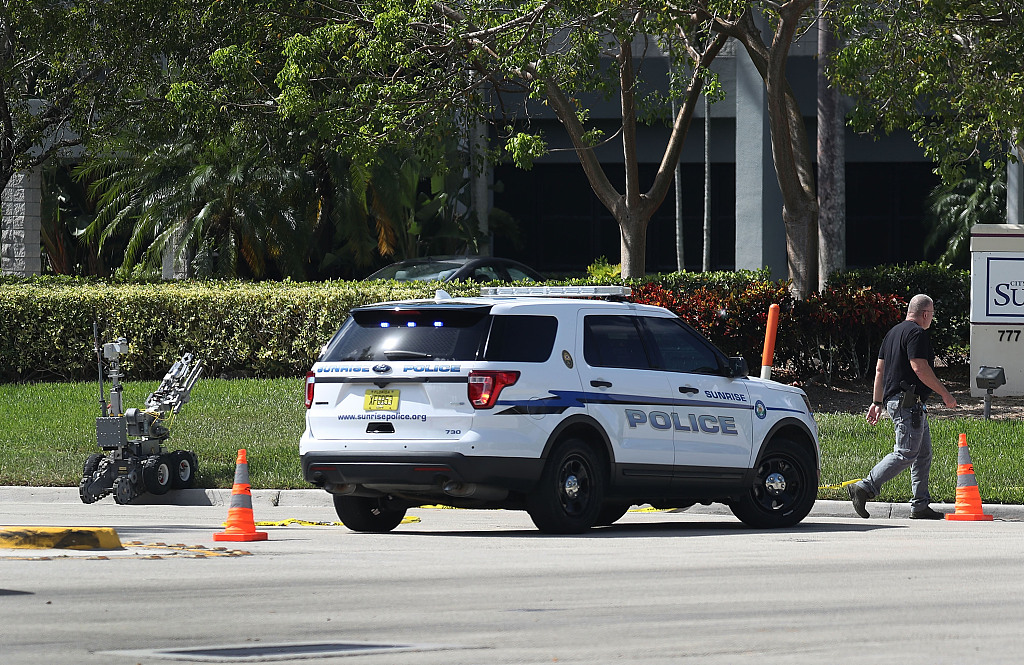 (Photo: The Broward Sheriff's Office bomb squad deploys a robotic vehicle to investigate a suspicious package in the building where Rep. Debbie Wasserman Schultz (D-FL) has an offce on October 24, 2018 in Sunrise, Florida. / VCG)

A spate of suspicious packages containing pipe bombs sent to prominent Democrats and CNN has injected national security into the final two weeks of the midterm elections.

Security has been beefed up around some potential 2020 Democratic presidential candidates, and concerns about the mail bombs addressed to former President Barack Obama, former presidential nominee Hillary Clinton and former Vice President Joe Biden have risen to the top of pre-November debates in races across the country.

The investigation into the mail bombs comes as Democrats are seeking to pick up a net of 23 seats to win back control of the House and Republicans are defending a narrow 51-49 Senate majority.

Former Vice President Joe Biden said Thursday that he hopes the shock of a mail bomb plot targeting him and other public figures has been enough to help end the country's divide.

Biden said during a speech at the University at Buffalo that he hoped the scare "might wake everybody in my business up a bit and realize that we have to begin to put this country back together again."

"This division, this hatred, this ugliness — it has to end," Biden said.

The former vice president, a potential 2020 presidential candidate, campaigned earlier in the day for Democrat Nate McMurray, a town supervisor of Grand Island, who is challenging Republican Rep. Chris Collins. Collins is running for a fourth term while awaiting trial on insider trading charges. He has pleaded not guilty.

The university said before the speech that it was implementing extra security measures after two package bombs addressed to Biden were intercepted at Delaware mail facilities.

Avenatti, a prominent Trump critic, was quoted by Time as saying that when it comes to the party's 2020 nominee, "I think it better be a white male." He told the news magazine that he wishes it weren't so but that people listen to white men more than they listen to other people.

Asked about the comments, Avenatti told The Associated Press, "I was misquoted and I was taken out of context." He declined to elaborate.

Time said it stands by its reporting and later released a transcript showing he made the statements.

Avenatti tweeted that he has "consistently called on white males like me to ... take responsibility" and help stop "the sexism and bigotry that other white males engage in."

Avenatti said earlier Thursday that he had increased his security measures since the mail bombs started popping up and that his mail was being screened offsite.

A Senate debate in Missouri on Thursday focused on a vitriolic political climate across the nation and finger-pointing between the two major parties.

Hawley, in the debate hosted by KMBC-TV in Kansas City, cited "mobs popping up" after confirmation hearings for Supreme Court Justice Brett Kavanaugh. He also referenced former Attorney General Eric Holder's comment that when those on the opposite side of the aisle "go low," Democrats should "kick 'em."

McCaskill criticized Hawley for not acknowledging the role of Trump's "incendiary" rhetoric.

Bloomberg disclosed earlier this year that he intends to spend tens of millions of dollars to support Democratic congressional candidates as the party attempts to seize control of the House.

A Republican appointed to the Senate representing Mississippi expressed a willingness to debate a Democratic challenger if the race reaches a runoff in a special election.

Hyde-Smith has declined to debate all three challengers before the Nov. 6 special election, which includes Espy, a former agriculture secretary under President Bill Clinton; Chris McDaniel, a Republican state senator; and Tobey Bernard Bartee, a Democrat who is a former military intelligence officer.

If no candidate wins a majority, the top two will advance to a Nov. 27 runoff. The winner will serve the final two years of Cochran's six-year term.

New York Sen. Kirsten Gillibrand, considered a potential Democratic candidate for the White House in 2020, said during a Thursday debate with her Republican challenger that she will serve out her six-year Senate term if she's re-elected next month.

Gillibrand, whose star has risen quickly since she succeeded Hillary Clinton in the Senate in 2009, also fielded questions about immigration, health care and other issues during a half-hour televised debate held in WABC-TV's studio in Manhattan.

When asked her plans in two years, Gillibrand responded: "I will serve my six-year term."

Opponent Chele Farley, who works in the financial services industry, scoffed at the answer. "Honestly, I don't believe that, considering this is the third day that she has been in New York during the month of October when she has been in five other states including New Hampshire this month," Farley said.

Gillibrand campaigned last week in New Hampshire, the home of the nation's first presidential primary, on behalf of Molly Kelly, a Democrat who is running for governor.

In Florida's gubernatorial debate on Wednesday night, Republican former Rep. Ron DeSantis and Democratic Tallahassee Mayor Andrew Gillum were asked about the bombs sent to Democratic leaders. DeSantis condemned the actions, noting that he was at the 2017 congressional baseball practice in which Rep. Steve Scalise, R-La., was wounded by a gunman whose social media posts had suggested he targeted Republicans.

"I know firsthand that when we start going down that road, that can be very, very deadly," DeSantis said.

Gillum said he was grateful that no one had been hurt. "But," he said, "we've really seen a collapsing of our political discourse."