The British government will have a third attempt next week at getting MPs to approve the revived Brexit deal agreed between London and Brussels. 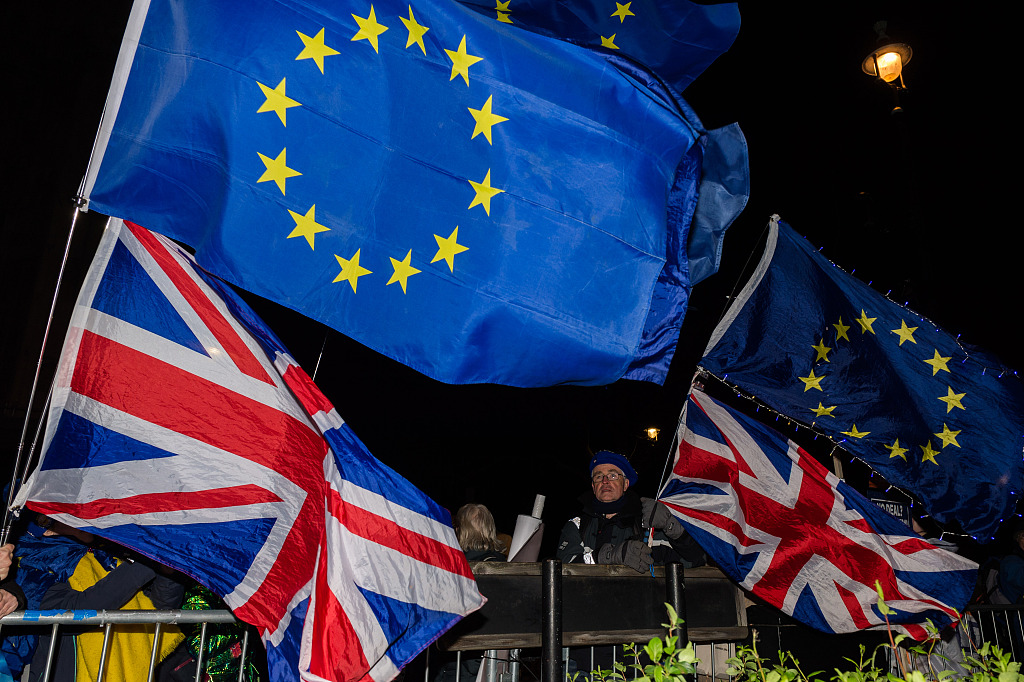 Pro-EU supporters protest outside the Houses of Parliament in London as they campaign to stop Brexit and demand a People's Vote on EU membership on March 14, 2019, in London, UK. (Photo: VCG)

Following a vote in the British parliament on Thursday, to seek an extension to the Brexit process from March 29 to June 30, May will bring the withdrawal agreement back before MPs by March 20.

The deal is aimed at ensuring a smooth exit from the European Union, to be followed by a transition period that could last until 2022.

The 585-page withdrawal agreement was voted down overwhelmingly by the British parliament in January, and again on Tuesday.

However, the government is hoping that the looming deadline will persuade many MPs to change their minds.

Brexit hardliners have objected in particular to the agreement's "backstop" provisions on the Irish border, which they fear could lock Britain indefinitely into a customs union with the EU.

After more talks with the EU, May on Monday said she had secured "legally binding" changes to the Irish border issue.

But her government's top law official, a respected lawyer, on Tuesday ruled that while the likelihood of being stuck in EU trade arrangements had reduced, risks from its most contentious legal points remained "unchanged".

The other main elements in the agreement are the protection of citizens' rights and Britain's final bill to the EU.

Following are the main points of the deal:

A transition period lasting until December 31, 2020 would preserve the status quo and allow time for Britain and the EU to negotiate their future relations.

It would also allow governments, businesses and individual citizens to adapt to life after Brexit.

The only major difference during that period is that Britain would no longer be represented in EU institutions.

Britain would continue to participate in the EU Customs Union and the Single Market and must respect EU rules on free movement of goods, capital, services and labour.

The transition period can be extended once for one or two years, meaning it could last until December 31, 2022.

The deal outlines a "backstop" arrangement to prevent the return of border checks between the British province of Northern Ireland and the Republic of Ireland if the sides fail to agree a free trade pact following the transition period.

Under the arrangement, Britain and the EU would form a single customs territory and Northern Ireland would also follow EU single market rules on the movement of goods to allow the border to remain free-flowing.

Northern Irish businesses would be able to bring goods into the EU single market without restrictions.

At any point after the transition period, the EU or Britain could decide that the arrangement was no longer necessary -- but crucially they must take the decision together.

Some British MPs fear Britain could be stuck in the arrangement indefinitely, which would hamper its ambition to develop an independent trade policy.

EU and UK citizens, as well as their family members, can continue to live, work or study, enjoying equal treatment to host nationals under the respective laws.

It covers all such citizens who arrive before the transition period ends. They will maintain their right to healthcare, pensions and other social security benefits.

EU citizens arriving in Britain after the end of the transition period -- whenever that is -- will be subject to more stringent immigration rules that are currently being debated in the British parliament.

Covering Britain's outstanding financial obligations to the bloc, it calls for a fair settlement for UK taxpayers that the British government estimates to be up to £39 billion (44 billion euros, $51 billion).

With longstanding Spanish claims to Britain's Mediterranean outcrop of Gibraltar, all sides sought to defuse any future tensions.

The deal provides for Spanish-British cooperation on citizens' rights, tobacco and other products, environment, police and customs matters.

It sets the basis for administrative cooperation for achieving full transparency in tax matters, fighting fraud, smuggling and money laundering.

The deal aims to ensure no disruption or loss of rights for the 11,000 Cypriot civilians living and working in the areas of the British sovereign military bases.

It aims to ensure that EU law will continue to apply in the base areas, including on taxation, goods, agriculture, fisheries and veterinary and phytosanitary rules.

It oversees the UK's withdrawal from Euratom, the EU treaty on nuclear energy and protects intellectual property, including trademarks as well as more than 3,000 EU geographical indications.