VIENTIANE, June 16 (Xinhua) -- The China Railway No. 5 Engineering Group (CREC-5) has completed the construction of the main structure of the longest bridge along the China-Laos Railway, the Phonethong super major bridge. 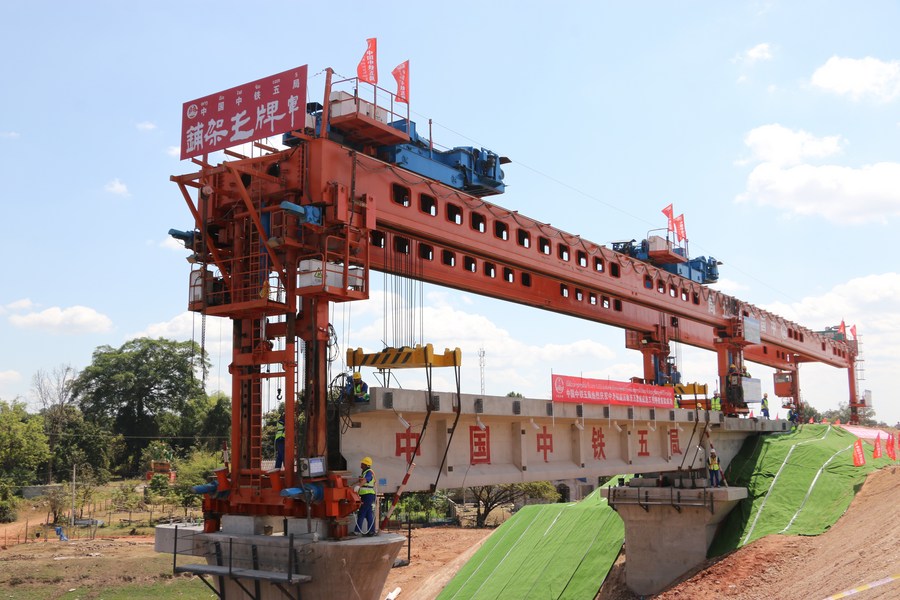 The China Railway No. 5 Engineering Group (CREC-5) installs the first T-shape concrete beam of the 7.53-km Phonethong super-major bridge, the longest bridge of the improvised project, on the outskirts of the Lao capital Vientiane on Feb. 11, 2021. (File Photo: Xinhua)

The Chinese engineering company, the CREC-5, told Xinhua on Wednesday that with the last pier cemented on Monday, the main structure of the Phonethong super major bridge, the longest China-Laos Railway bridge with a length of 7,528.56 meters and 231 piers, was completed.

The construction of the Phonethong bridge was kicked off in last July in Lao capital Vientiane, the southern end of the China-Laos Railway.

The CREC-5 engineering team has overcome a series of difficulties including the lengthy rainy season, complex geological conditions and the impact of the COVID-19 epidemic, to advance the bridge's construction.

The China-Laos Railway's construction has been confronted with huge challenges and difficulties in the epidemic, but the work progressing in an orderly and balanced manner has strengthened the confidence in the timely completion of the railway by this December, Bounthong Chitmany, Vice President of Laos said, when talking to Xiao Qianwen, general manager of the Laos-China Railway Co., Ltd., which is responsible for the construction and operation of the railways.

The over-400-km railway will run from Boten border gate in northern Laos bordering China, to Vientiane with an operating speed of 160 km per hour.

The electrified passenger and cargo railway is built with the full application of the Chinese management and technical standards. The construction of the project started in December 2016 and is scheduled to be completed and open to traffic in December 2021.