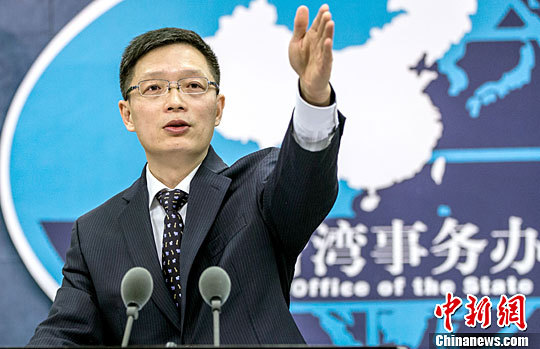 An Fengshan, spokesperson for the Taiwan Affairs Office of the State Council (Photo: Chinanews.com)

The Chinese mainland resolutely opposes "Taiwan independence" secessionist activities in any form, including the so-called referendum, a spokesperson said Wednesday.

An Fengshan, spokesperson for the Taiwan Affairs Office of the State Council, made the remarks at a press conference in response to a question about "referendum law amendment" passed by Taiwan's legislative body.

"We strongly oppose de-sinicization under any name or by any means. Compatriots on both sides should be vigilant against 'Taiwan independence' secessionist forces," An said.

An also took a question about Chinese language textbooks jointly compiled by educational institutions from both sides of the Straits, which senior high schools in Taiwan have used from October this year.

An said that the mainland and Taiwan shared the same cultural tradition and the textbooks would be conducive for carrying forward traditional national culture.