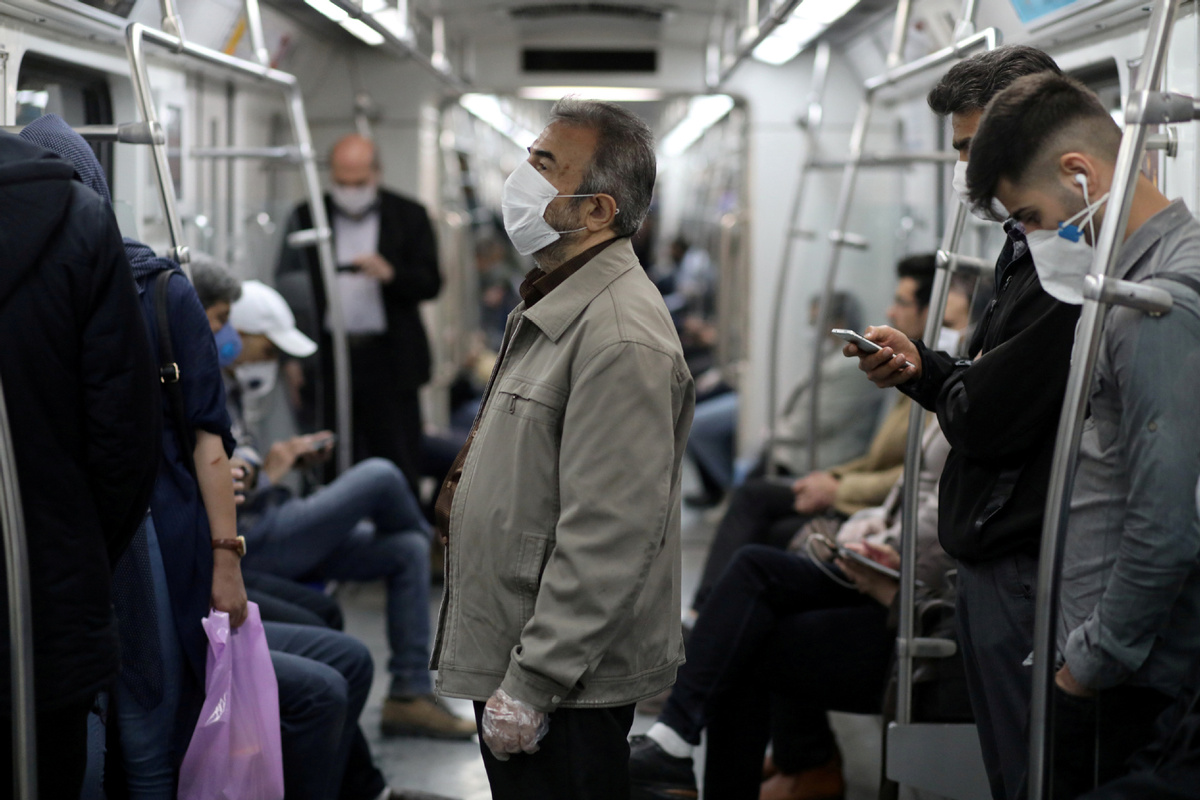 Iranians wear protective face masks against the risk of coronavirus contagion as they ride in the metro, in Tehran, Iran, May 20, 2020. (Photo: Agencies)

CAIRO - Most of the major Middle East countries on Monday announced the further ease of the precautions against the novel coronavirus, as Eid al-Fitr, a Muslim festival of breaking the fast at the end of the holy month of Ramadan, is being observed across most of the region.

In Turkey, the hardest hit country by the coronavirus in the Middle East, reported 987 new cases on Monday, raising the total number to 157,814, Turkish Health Minister Fahrettin Koca said.

Meanwhile, the death toll from COVID-19 rose to 4,369 in Turkey after 29 new fatalities in the past 24 hours were confirmed, Koca added.

Turkey has been recently witnessing more signs of slowdown in the pandemic, with daily new infections kept at around 1,000 in the past week.

The Iranian authorities on Monday allowed partial reopening of the Muslim Shiite shrines across the country after more than two months of closure over the coronavirus pandemic.

The Iranian health ministry reported 2,023 new cases of the coronavirus on Monday, bringing the total number in the country to 137,724 since the outbreak in late February, state TV reported.

Meanwhile, the death toll has hit 7,451 in Iran and 107,713 have recovered with 2,585 still in critical condition, according to the country's health ministry.

The gradual steps, with social distancing regulations obeyed and based on medical reports of the spread of the virus, will start from Thursday and expand until the situation is back to normal, the SPA quoted Health Minister Tawfiq Al-Rabiah as saying.

Saudi Arabia has controlled the spread of the virus through early precautionary measures, especially maintaining a low death rate, the minister noted.

The Arab kingdom announced on Monday 2,235 new coronavirus cases, raising the total number of infections to 74,795, while death toll rose by nine to 399.

In Israel, only 17 new coronavirus cases were reported on Monday, bringing the total number in the country to 16,734.

After four consecutive days without a death case, the Israeli health ministry reported two new fatalities, bringing the death toll in the Jewish country from the COVID-19 to 281.

Earlier in the day, the Israeli transport ministry announced the full resumption of the state's rail system on June 8.

It is worth noting that Israel's GDP contracted by annualized 7.1 percent in the first quarter of 2020, the sharpest drop in the last 20 years and mainly due to the impacts of the coronavirus pandemic, according to a report released by the state's Central Bureau of Statistics on Monday.

Palestine on Monday declared the end of lockdown and a set of new measures in dealing with the COVID-19, lifting the ban on movement between cities immediately, and allowing public transport to operate in terms of safety procedures.

Shops, commercial and industrial establishments, including cafes, restaurants, and health clubs as well as mosques and churches, will be allowed to reopen starting Tuesday morning, while official bodies will return to work regularly starting Wednesday morning after the end of Eid al-Fitr holiday, according to Palestine Prime Minister Mohammed Ishtaye.

The number of COVID-19 cases registered in Palestine has reached 602, including 475 recoveries and five deaths, with no new infections reported on Monday.

Qatar's health ministry on Monday announced 1,751 new infections of the novel coronavirus, taking the total number of confirmed cases to 45,465.

As the first among the Gulf countries to report COVID-19 cases, the United Arab Emirates (UAE) on Monday announced 822 new COVID-19 cases, bringing the total number in the country to 30,307.

In Kuwait, 665 new cases of COVID-19 and nine more deaths were reported on Monday, raising the tally of infections to 21,967 and the death toll to 165, the health ministry said in a statement.

The Kuwaiti government has been imposing a full curfew in the Gulf country to curb the rapid increase of coronavirus cases.