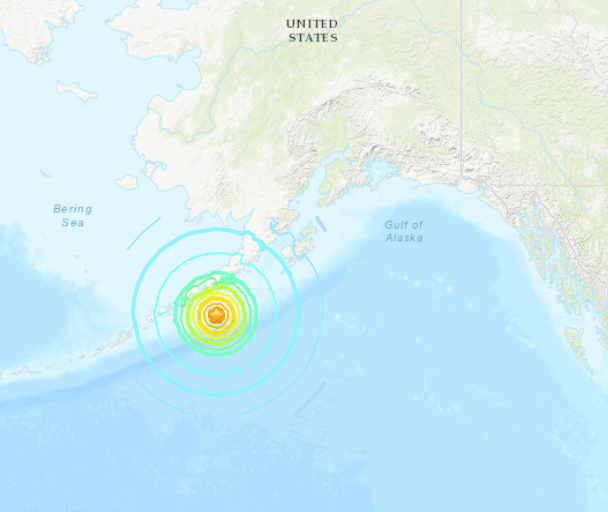 A major 7.5-magnitude quake off the coast of Alaska triggered small tsunami waves Monday, US agencies said, but there were no immediate reports of casualties or damage.

Residents evacuated to higher ground as tsunami warnings covered much of the southern coast of the remote US state, including the thinly populated Alaska Peninsula, according to the National Oceanic and Atmospheric Administration.

Two-foot waves were recorded at the tiny nearby city of Sand Point, some 60 miles (100km) from the epicenter of the quake which struck at a depth of 25 miles (40 km).

The at-risk zone extended hundreds of miles northeast to the entry of the Cook Inlet.

But it stopped short of the state's largest city of Anchorage, located some 600 miles (1,000 km) from the epicenter and at the end of that gulf.

And the tsunami warning was downgraded to a less-severe advisory, with NOAA stating that affected areas "should not expect widespread inundation."

The earthquake itself was felt in the nearby Alaska Peninsula community of King Cove, but everything seemed to be intact, city administrator Gary Hennigh told the Anchorage Daily News.

"All the couches, recliners and bookcases were moving around, and I had to pretty much hold one of them up," he told the newspaper.

There was "a low likelihood of casualties and damage" from the quake itself, the United States Geological Survey said.

The major quake was followed by at least five aftershocks of 5.0-magnitude or higher.

Alaska is part of the seismically active Pacific Ring of Fire.

The US state was hit by a 9.2-magnitude earthquake in March 1964, the strongest ever recorded in North America.

It devastated Anchorage and unleashed a tsunami that slammed the Gulf of Alaska, the US west coast, and Hawaii.

More than 250 people were killed by the quake and the tsunami.