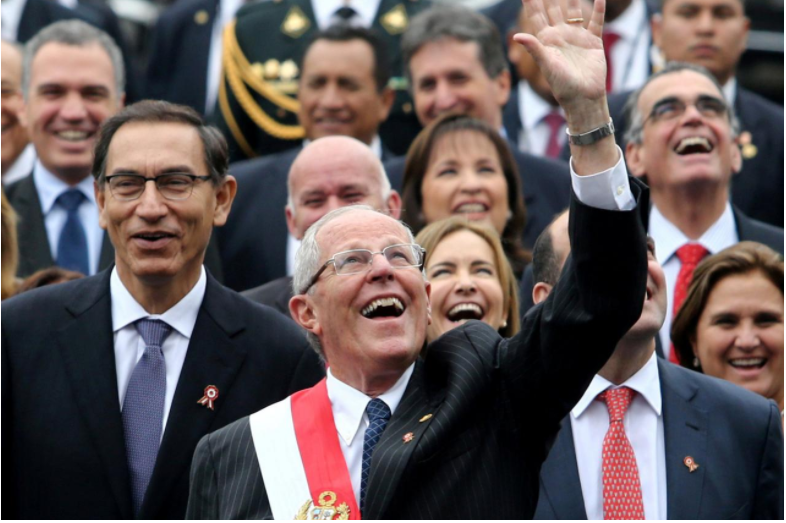 A majority of Peruvians want embattled President Pedro Pablo Kuczynski to leave office, a poll showed on Sunday, as his approval ratings plummeted to new lows following revelations that businesses tied to him received payments from Brazilian builder Odebrecht.

The poll, conducted by Ipsos Peru for the daily newspaper El Comercio, came just four days before Congress votes on removing Kuczynski from office on the grounds he is morally unfit to lead.

The poll found that only 18 percent of Peruvians had a favorable opinion of Kuczynski´s administration. That is down nine percentage points from November.

The new data suggests that Peruvians are quickly losing faith in Kuczynski after documents sent to Congress showed scandal-plagued Odebrecht had paid $4.8 million to two companies owned by Kuczynski or a close business associate for financial and advising services.

The number of Peruvians who said they disapproved of him rose 10 percentage points to 75 percent, Ipsos said.

Kuczynski, who has denied any links to Odebrecht, has resisted calls to resign over the transactions and said there was nothing improper about them.

Odebrecht, which admitted in a plea deal last year to bribing officials in 12 countries including Peru, said on Saturday the $4.8 million were legitimate payments and not part of its past corrupt dealings.

Late Friday, lawmakers passed a motion to start “presidential vacancy” procedures to unseat Kuczynski in a vote scheduled for Thursday.

If Kuczynski is removed, Vice President Martin Vizcarra, who is also serving as ambassador to Canada, would take over. New elections would only be called if Vizcarra as well as Kuczynski’s second vice president resigned or were removed from office.

In the poll, 67 percent of Peruvians said new elections should be held. Only 30 percent said Vizcarra should take over, the Ipsos poll found.

“At this point, it seems inevitable that Kuczynski will fall,” said Ipsos president Alfredo Torres. “Independent of the legality of his conduct ... it’s undeniable that his credibility has been profoundly hurt.”

Two former Peruvian presidents, Ollanta Humala and Alejandro Toledo, have been ensnared in the Odebrecht probe over alleged payments - which they have denied. Humala was jailed in July pending trial and authorities hope to extradite Toledo from the United States.