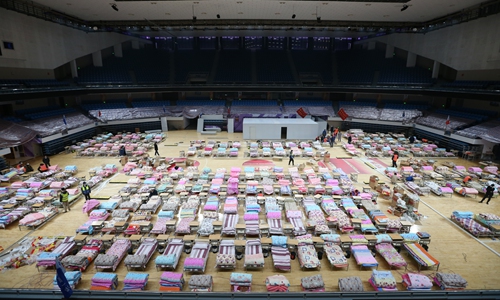 Iran is learning from China's experience in enhancing its capacity to receive and treat confirmed and suspected COVID-19 patients. Some Iranian provinces ravaged by the virus announced to take over exhibition centers, parking lots and factories to establish makeshift hospitals, Iranian media reported on Tuesday.

These makeshift hospitals are designed based on portable battle field hospitals that are composed of shelters and tents. It was also the first time the military concept was applied in epidemic control efforts. It took only 29 hours to build the first three makeshift hospitals with more than 4,000 beds in Wuhan since the decision was made in February 3.

In Wuhan, one of every four cured patients from the COVID-19 pneumonia was treated in a makeshift hospital, according to Xinhua.

After the last 49 patients stepped out from Hongshan Stadium in Wuhan, or Wuchang Fangcang makeshift hospital, the temporary hospital that operated for 35 days closed on Tuesday. As of that day, all 16 makeshift hospitals closed after receiving and treating more than 12,000 COVID-19 patients, reported the Xinhua News Agency on Tuesday.

"Fangcang makeshift hospitals will be scripted in the history of China's fight against the COVID-19 as it has created the 'China approach' to dealing with health crises," said Jiao Yahui on Tuesday, reported Xinhua. Jiao is a hospital management official of the National Health Commission.