WORLD Malawians turn up to vote in tripartite elections

Malawians turn up to vote in tripartite elections

MALAWI, Blantyre, May 21 (Xinhua) -- Malawians across the country on Tuesday queued up to cast ballots that will determine which party is to rule the country in the next five years. 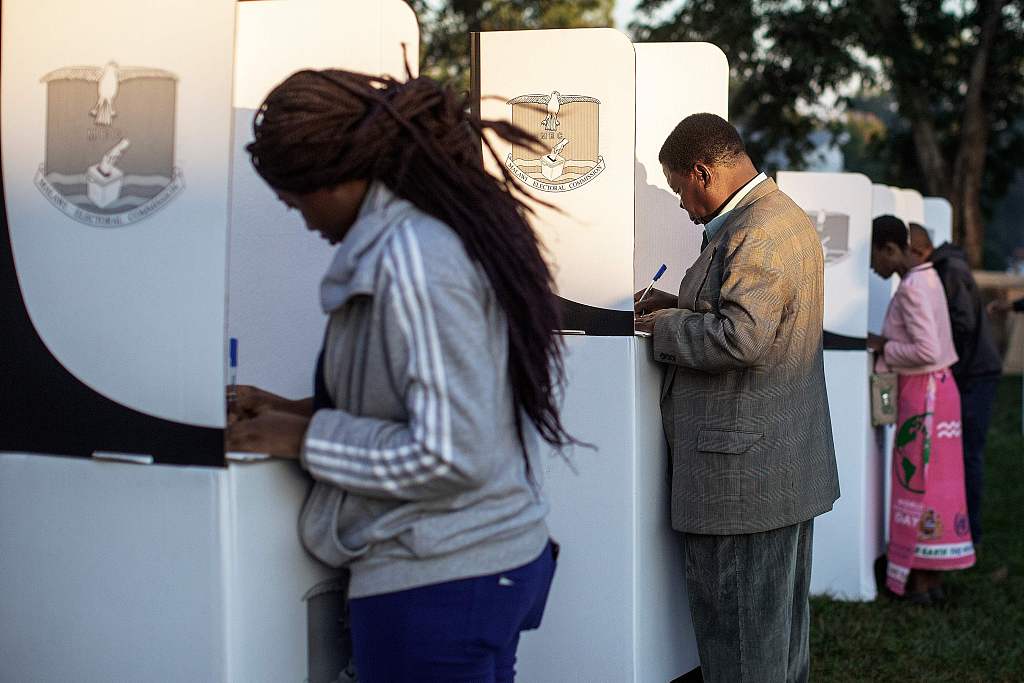 Malawians mark their ballots at a polling station during general elections on May 21, 2019 in Lilongwe, Malawi. (Photo: VCG)

The estimated 6.8 million voters headed to the polls to elect a president, Members of Parliament and local government councilors.

According to figures, incumbent President Peter Mutharika, 78, is being challenged by six other candidates, among them his vice-president Saulos Chilima of the United Transformation Movement (UTM) and Lazarus Chakwera of the main opposition, Malawi Congress Party.

Mutharika, who was elected for his first term in 2014, is seeking his second and last term in office and his hope is in rural votes where he has promised to turn around the agriculture sector.

The elections are being held under the new Political Parties Act of 2018 in over 5,000 polling centers across the country.

Analysts and locals have indicated that it is mainly a two-man race between Mutharika and his vice, while Chakwera is believed to stand a chance to cause an upset.

While the pre-election period has generally been peaceful except for a few pockets of violence, some stakeholders have complained of attempts to rig the polls especially by the government party.

Patricia Kaliati secretary-general of the opposition UTM told local media, The Nation on Sunday that the Malawi Electoral Commission (MEC) has not handled most of the complaints the party lodged, including allegations of some parties buying voter cards.

"We have lodged several complaints regarding some malpractices, chiefs campaigning for the ruling party," she is quoted as saying.

In a statement released to the local media, Malawi Electoral Support Network chairperson said the rigging claims by some parties have the potential to affect the credibility of the elections.

But the electoral body has assured of holding a credible and transparent elections and that it is ready to hold the elections.

Justice Jane Ansah, chairperson of the electoral body assured that it was ready to hold transparent and credible elections and that all was set for the polls.

She told journalists during a press briefing on Monday that the distribution of both electoral materials and personnel to conduct the elections have been concluded and that the electoral body expects the voters to turn up in large numbers and exercise their democratic rights to choose a government of their choice.

She further assured that the electoral body has done everything possible to ensure that it delivers a free and transparency electoral process and dispelled reports of attempts to rig the elections, saying the reports were baseless and without facts.

The claims, she said, were only meant to discourage voters from exercising their rights to vote.

She further said elections results will be announced within eight days and that the electoral body would be pressurized but would ensure that it does a good job and announces credible results.

"MEC will not be in a hurry to announce results in order to do a thorough job," she said.

At the Tax Office Polling Station in Blantyre, one of the biggest polling stations in the city, queues formed as early as 05:00 hours as voters turned up early to cast their votes.

"I am happy that I have voted. I came here as early as 04:00 a.m. I have been waiting for this time because voting gives us an opportunity to choose a government of our choice," Nelson Bunyani, a voter at the polling station who was among the early voters told Xinhua.