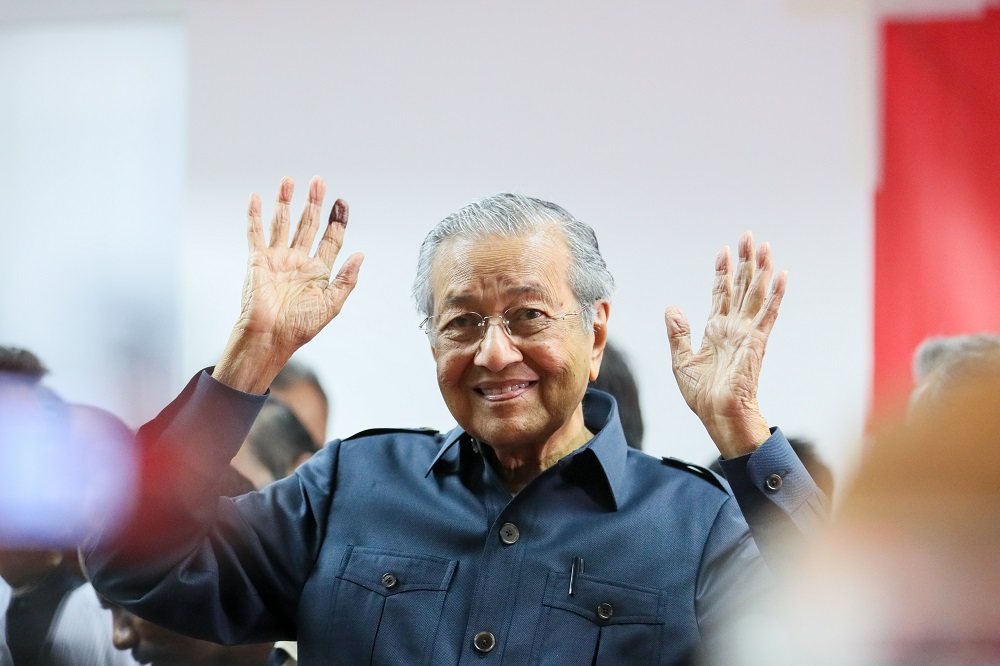 Mahathir Mohamad attends a news conference as Malaysian prime minister in May, 2018. He submitted his resignation on Monday but was asked to stay as interim leader. (Photo: CGTN)

KUALA LUMPUR, Malaysia－Malaysian Prime Minister Mahathir Mohamad tendered his resignation to Malaysia's king on Monday as his political party announced it would quit the ruling alliance in a shock political upheaval less than two years after his election victory.

The king accepted his resignation and appointed Mahathir to serve as interim prime minister until a new one can be appointed.

The stunning turn of events came amid plans by Mahathir supporters to team with opposition parties to form a new government and thwart the transition of power to his named successor Anwar Ibrahim, replaying their decades-old feud.

Minutes before his resignation was offered, Mahathir's Bersatu party announced it would leave the alliance and support Mahathir as the premier. Eleven other lawmakers, including several Cabinet ministers, also announced they are quitting Anwar's party.

With nearly 50 lawmakers from Bersatu and Anwar's party leaving the ruling alliance, the maneuvers leave doubt whether Anwar has enough support to take power.

Earlier, two of Anwar's rivals from his People's Justice Party, Mohamed Azmin Ali and Zuraida Kamaruddin－seen as key figures in leading the bid to form a new government and block his ascent－were sacked, the party announced.

Mahathir and Anwar were Malaysia's top two leaders in Mahathir's first stint as premier but fell out politically before reuniting in the political pact that ousted the corruption-tainted government of Najib Razak in a May 2018 election.

They led the alliance to an unexpected victory against a coalition that had ruled Malaysia uninterrupted for over six decades, and Mahathir agreed to eventually hand power to Anwar.

Their relationship has been testy, with Mahathir refusing to set a date to relinquish power despite a preelection agreement to hand over power.

Anwar said earlier on Monday that he was satisfied the government's reform agenda will continue. He refused to say more.

Ironically, the maneuvers could restore to power the Malay party of the disgraced Razak, who with several of his party leaders are standing trial for corruption. It could also propel to national power a hardline Islamic party that rules two states and champions Islamic laws. The two Malay parties still have strong support from ethnic Malays, who account for 60 percent of Malaysia's 32 million people.

Anwar and his wife Wan Azizah Wan Ismail, who is currently the country's deputy prime minister, met the king late on Monday. The king also summoned Mahathir to the palace.

Anwar said on Monday after meeting Mahathir with other alliance leaders that Mahathir had quit as he didn't want to be associated with the former government that he worked so hard to oust in 2018 polls.

"It was a very good meeting. I am satisfied with his stance that we must prioritize our principles and the reform agenda must continue. That is all I can say for now," he said.

Analysts said King Sultan Abdullah Sultan Ahmad Shah could decide which faction has the majority support in Parliament or call a snap election. They warned that such a new government could give rise to Malay Islamic supremacy sentiments that would derail Malaysia's multiethnic society.

"Mahathir's top political priority is to stave off Anwar's increasingly vigorous claim on the premiership. So he had to work with otherwise unsavory opposition parties to form a working parliamentary majority to counter and warn off Anwar," said Oh Ei Sun, a senior fellow at the Singapore Institute of International Affairs.