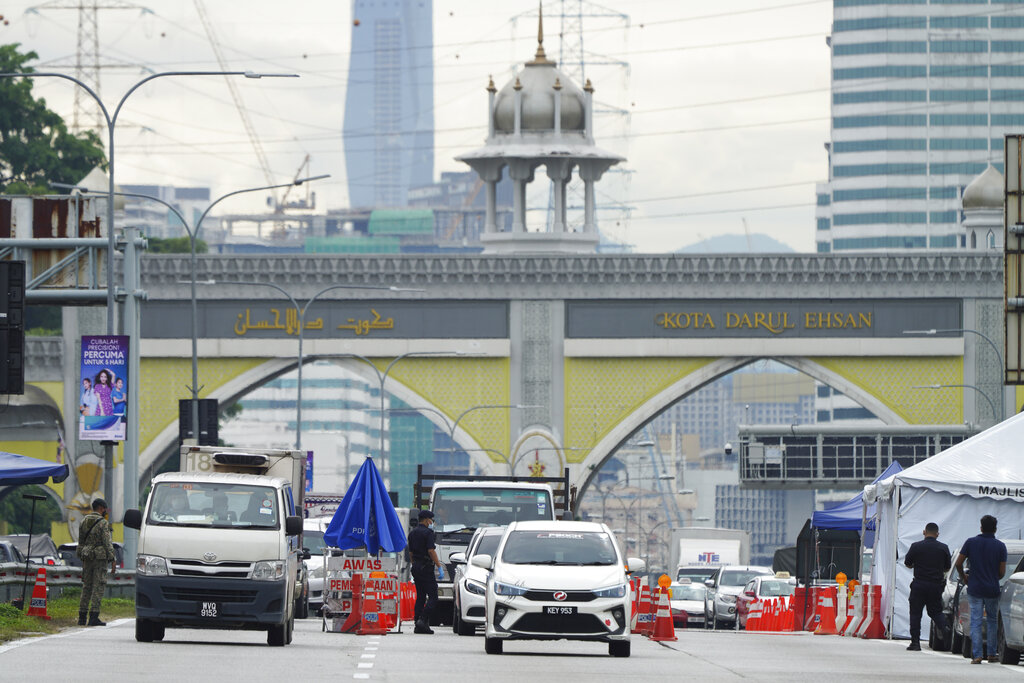 Police check vehicles at roadblocks during the movement control order on the outskirts of Kuala Lumpur, Malaysia, Tuesday, May 11, 2021. Malaysian Prime Minister Muhyiddin Yassin announced Monday that the whole country will be placed under a near lockdown for about a month but all economic sectors will be allowed to operate. (Photo: AP)

It has been a week of announcements of new restrictions, of about-turns, of confusion, all culminating on Monday in the decision to impose a partial lockdown on the entire country – something Malaysia's government had repeatedly vowed not to do.

And whereas earlier in the pandemic, there were huge clusters often numbering in the thousands among migrant foreign workers, close to 95 percent of the cases now are Malaysians – and the majority of them infected via random community spread.

Yet a week ago, Ramadan bazaars remained packed with people, shopping malls bustling, restaurants open for dine-in, and schools in session despite countless COVID-19 cases among students and teachers. 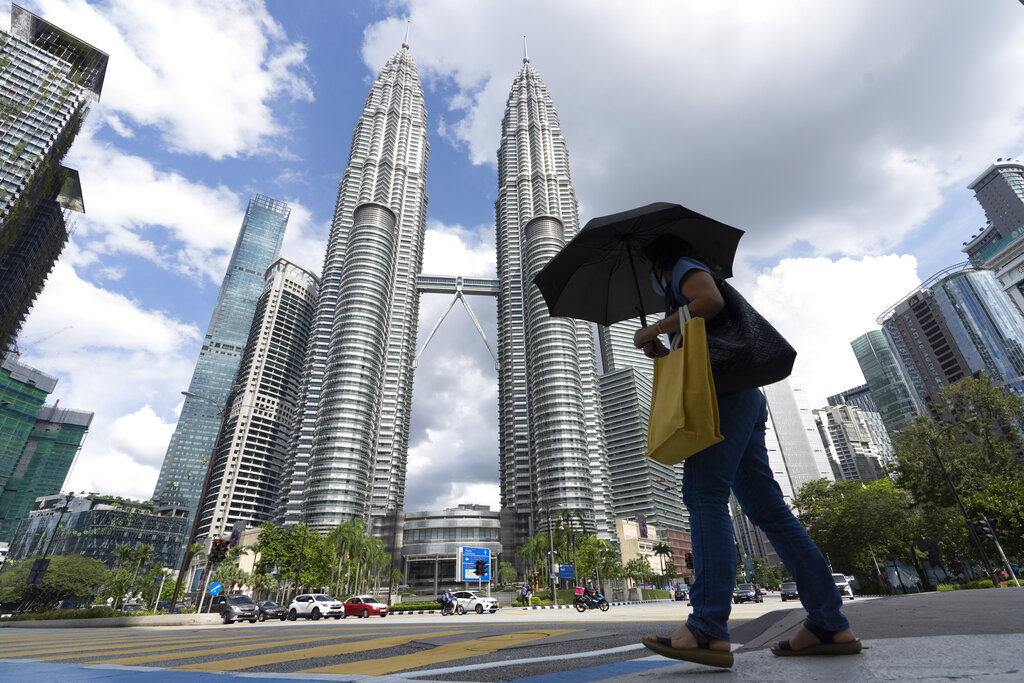 A woman wearing a face mask walks in front of the Twin Towers during the first day of third Movement Control Order (MCO) in Kuala Lumpur, Malaysia, Friday, May 7, 2021. (Photo: AP)

Those districts completely surround Kuala Lumpur, but no such restrictions were imposed on the capital city. Not until the following day after a huge backlash from the public and experts.

Businesses flagged by a new data-driven system to identify potential COVID-19 hotspots were told they could remain open, then within hours, ordered to shut immediately.

After some more hesitation, all inter-district, as well as inter-state travel, was banned.

Malaysia at the tipping point ahead of Eid

On the weekend, the country's director-general of health Dr. Noor Hisham Abdullah - the civil servant who has been the face and voice of Malaysia's pandemic fight for much of the past 14 months - addressed the media and the people.

It was his first press conference in two months, having seemingly been side-lined by his political masters.

"We are in a critical condition. Public hospital and private hospital, we are running out of ICU (intensive care unit) beds," said Noor Hisham.

"If you are infected and come to the hospital and we do not have an ICU bed, we are in trouble. We do not want to end like countries which have to select who will live and who will die." 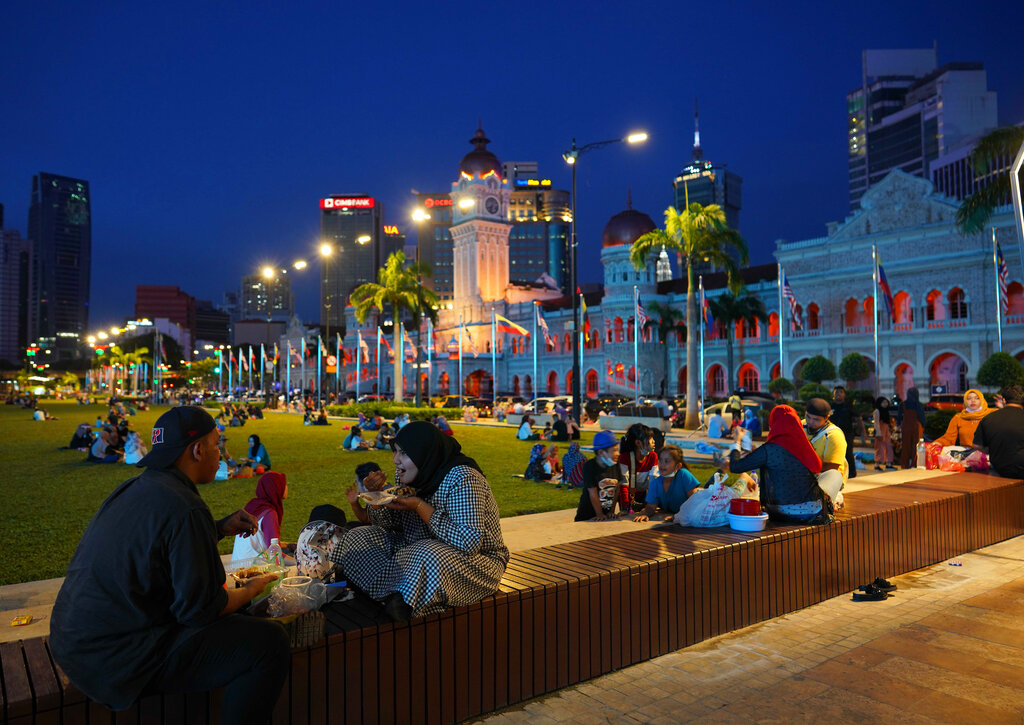 Muslims break their fast during the holy month of Ramadan at Dataran Merdeka (Independent Square) on April 24, 2021, in Kuala Lumpur, Malaysia. (Photo: AP)

It was the kind of frank, heart-felt plea that had been missing in the past two months.

He advised more sweeping restrictions than the government seems willing to impose, such as closing all non-essential retail and requiring people to work from home once again.

But above all, he expressed concerns that the upcoming Eid holiday to mark the end of Ramadan would tip Malaysia over the brink. 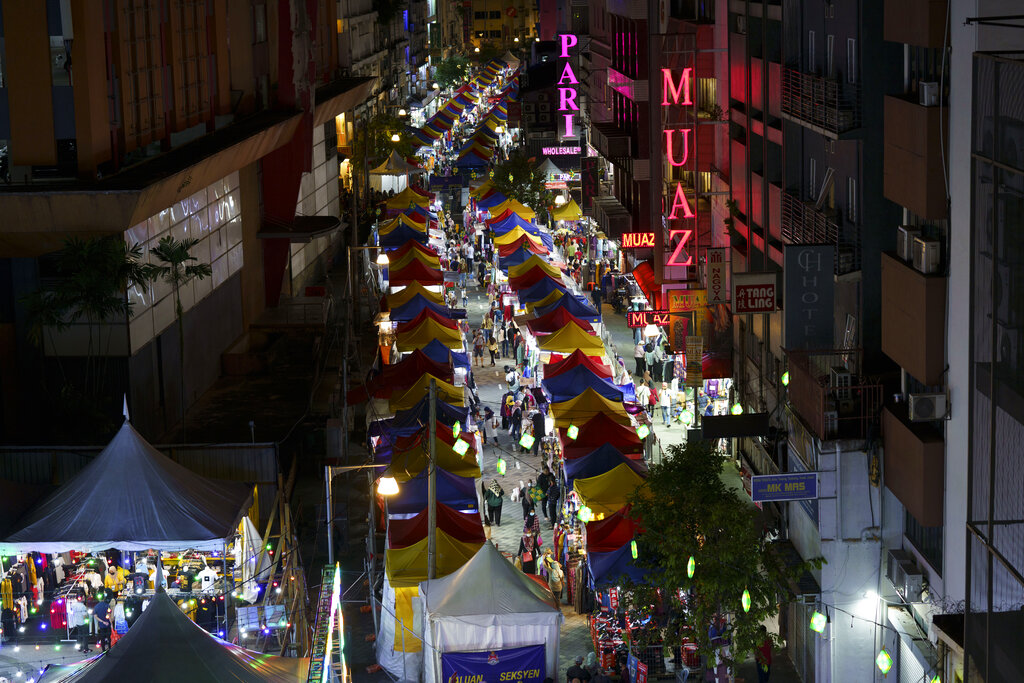 "If you plot the curve (of daily infections) you would have known (a nationwide MCO was needed). You don't decide based on the cases day by day. You've got to be preemptive. You should be one step ahead of the curve, not chasing the curve," said former deputy health minister Dr. Lee Boon Chye.

The nationwide movement control order will run through the Eid holiday till June 7. All educational institutions will be closed to in-person teaching, but most economic sectors will remain open.

Most significantly, perhaps, people will not be allowed to visit each other's houses or visit loved ones graves as they normally would do at Eid. Just 50 worshipers will be allowed to attend communal prayers at mosques that can normally accommodate more than 1000 worshippers, just 20 at smaller mosques.

Still, many feel it doesn't go anywhere near far enough, Dr. Subramaniam Muniandy, the president of the Malaysian Medical Association, is among them.

A Muslim vendor wearing protective mask waiting for customers at a Ramadan bazaar, amid the outbreak of the coronavirus disease (COVID-19) in Kuala Lumpur, Malaysia, Monday, April 19, 2021. (Photo: AP)

"I don't see the purpose of this MCO because you have all economic sectors open which are all over the place, in different locations. I don't see the logic, it's even contradictory," he said.

"The virus has already spread everywhere and it will only get worse."

"These various governmental ministries as well other agencies, the police and so on, they have to coordinate better in giving out consistent and concerted signals to the population, instead of having contradictory statements and flip flops," said political analyst Oh Ei Sun.

Oh and others said it looks as if the key decision-makers are only slowly acknowledging the severity of this latest wave of infections, and realizing that without action, the health director-general's dire warnings that Malaysia could be engulfed by a COVID-19 tsunami like India could prove prophetic.