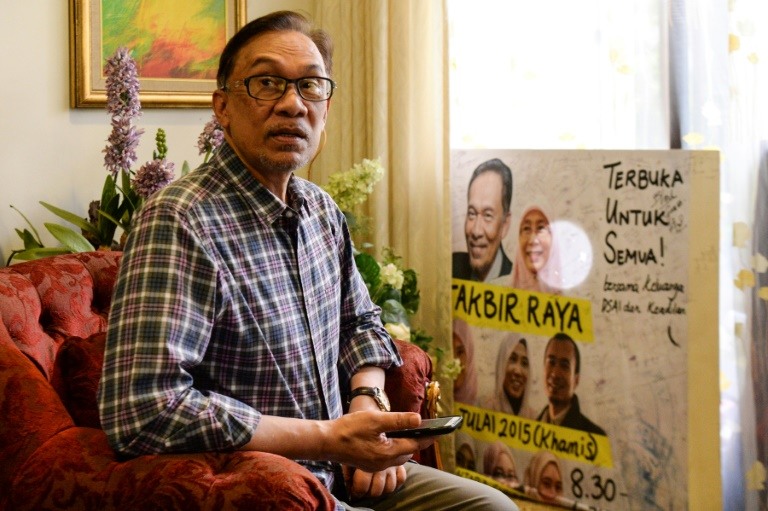 Anwar Ibrahim said he expects to re-enter parliament soon, but would not take up a cabinet post or the prime ministership just yet (Photo: AFP)

In an interview with AFP a day after he walked free from custody -- where he had languished since 2015 on what supporters say were trumped-up charges levelled at Najib's behest -- Anwar also said he would be back in parliament very soon.

"Give me a few months, I should be back as an MP. It is the correct thing to do," he said.

Anwar's release on Wednesday capped an astonishing week in Malaysian politics that saw Najib's long-ruling Barisan Nasional coalition booted from power in a revolution at the ballot box.

It also imperilled Najib, who Anwar said now faces an "arduous" legal battle -- without the protection of high office.

Anwar predicted that Najib would likely take up the spot he had just vacated in prison.

"He will certainly be charged," he said.

Anwar declined to say how he thought Najib's case would play out, as it depended on "how he can defend himself in court".

But Anwar added: "It will be very difficult for him to escape (going to) prison."

Mahathir, who came out of retirement to lead the revolt against Najib, has vowed to hand power to Anwar within two years.

The younger man's return to politics has been the subject of much speculation and he confirmed he would be seeking to contest a by-election to return as an MP soon -- but would not seek a position on the front benches just yet.

"I am not intending to join the cabinet," he said he had told Mahathir.