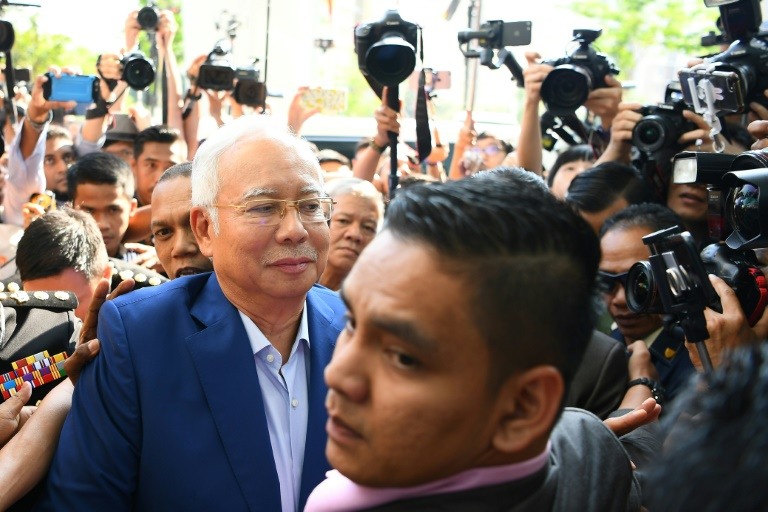 Malaysia's former prime minister Najib Razak had to navigate a media scrum when he arrived at the anti-graft agency for questioning over a massive financial scandal.(Photo: AFP)

Former Malaysian leader Najib Razak was questioned by anti-corruption authorities Tuesday after his shock election loss, as the top graft fighter revealed he faced threats and a bullet in the post when the old regime suppressed a probe into a massive financial scandal.

Najib's coalition suffered a defeat at the May 9 poll, beaten by a reformist alliance led by Mahathir Mohamad, which broke their six-decade stranglehold on power.

Mahathir, who first served as premier from 1981-2003 and came out of retirement aged 92 to take on Najib, campaigned on claims that the former leader and his cronies looted sovereign wealth fund 1MDB.

Billions of dollars were allegedly stolen from the fund in a sophisticated fraud, and used to buy everything from artworks to high-end real estate.

Najib and his reviled, luxury-loving wife Rosmah Mansor have had a swift fall from grace. They have been barred from leaving the country, and police have seized handbags, jewels and cash during raids on properties linked to the couple.

Public disgust at the corruption allegations swirling around them at a time middle-class Malaysians were suffering due to rising living costs and stagnant salaries was seen as a major factor in Najib's defeat.

The ousted leader pushed through a huge media scrum as he arrived at the Malaysian Anti-Corruption Commission (MACC) headquarters in the administrative capital of Putrajaya to be quizzed about 1MDB money allegedly ending up in his personal bank accounts.

He left after about five hours looking exhausted, and told waiting reporters that officials had "acted professionally" as they took his statement. The questioning is due to continue Thursday.

The toppled regime went to great lengths to put a halt to scrutiny of the problems surrounding 1MDB, closing down domestic probes, sacking critics from government, jailing those who spoke out, and muzzl ing the media.

New MACC chief Shukri Abdull, a long-time senior figure in the agency who retired but has been brought back by Mahathir, shed tears at a press conference as he told how he came under "tremendous pressure" during an earlier probe into a 1MDB subsidiary.

He recounted how witnesses were intimidated, authorities tried to push him into early retirement, and that he even received a bullet in the post.(Photo: AFP)

Shukri said the harassment reached a "very frightening" level and at one point he briefly fled to the United States as he feared arrest.

"Our witnesses were abducted. Some of them were questioned by others as to what they revealed to us," he said.

"I received a bullet at my home," he added. "I did not even tell my wife and my family, I did not lodge a police report."

As pressure mounted, Shukri decided to retire in 2016.

Najib was summoned by the anti-corruption body to give a statement over SRC International, an energy company that was originally a subsidiary of 1MDB.

According to an investigation by the Wall Street Journal, 42 million ringgit ($10.6 million) originating from SRC was transferred to Najib's personal bank accounts.

It is just one small part in the graft scandal, which is being investigated in several countries.

Hundreds of millions of dollars from 1MDB allegedly ended up in Najib's accounts but the ex-leader and the investment vehicle have denied any wrongdoing.

Mahathir has vowed to fully investigate the financial scandal and on Monday the new government set up a task force headed by high-ranking current and former officials to probe the controversy.

Following the fall of the corruption-riddled regime, which had led Malaysia since independence from Britain in 1957, figures linked to the 1MDB scandal have been making appearances.

Mahathir met at the weekend with Xavier Justo, a former executive with PetroSaudi, a company that was allegedly involved in corrupt deals with 1MDB.

The Swiss national is believed to have leaked documents related to the scandal to the media. He was jailed in Thailand for attempting to blackmail his former employer but was released in 2016.