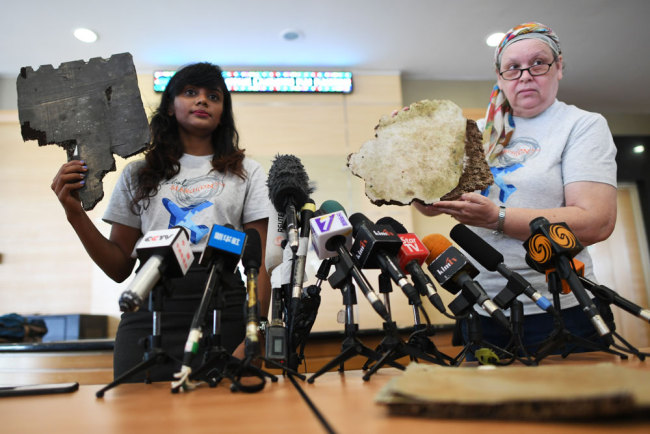 Jacquita Gonzales, (R) the wife of Malaysia Airlines flight MH370 steward Patrick Gomes, and Grace Subathirai Nathan (L), daughter of MH370 passenger Anne Daisy, show pieces of debris (believed to be from flight MH370 before handing over to Malaysia Transport Minister Anthony Loke in Putrajaya on November 30, 2018. The Malaysia Airlines jet vanished in March 2014 while en route from Kuala Lumpur to Beijing with 239 people onboard, most of them from China. [Photo: AFP]

Speaking to the press after the handover of possible debris of the missing plane, Loke reiterated the Malaysian government "never closed down" the possibilities to re-open the search.

"We have never close down any possibilities," he said, "If our authorities think there is any credible leads then we are always prepared to re-open."

Loke said in parliament on Thursday that the government would only be open to any search with credible leads surface.

Grace Nathan, a lawyer whose mother was on the plane, spoke on behalf of the several next of kin who were also present to handover the debris.

"We believe even though the pieces are small, together we can build a picture of what happened," she said, adding that the debris had been found between December 2016 and August of this year along the coast of Madagascar.

Five pieces of possible debris were handed over to Loke and most of them are the honeycombed material used in the aircraft, but one larger piece is said to be part of a Boeing 777 floor panel, the same model as the missing aircraft.

In January, the Malaysian government entered into an agreement with U.S.-based company Ocean Infinity on a "no cure, no fee" basis to resume the search.

The company, by deploying multiple autonomous underwater vehicles along with the search vessel Seabed Constructor, combed over 112,000 square km of the ocean floor. The effort ended in May without finding the plane.

The official MH370 investigation team said in its detailed report in July that it remained unable to determine the real cause for the disappearance of the plane.