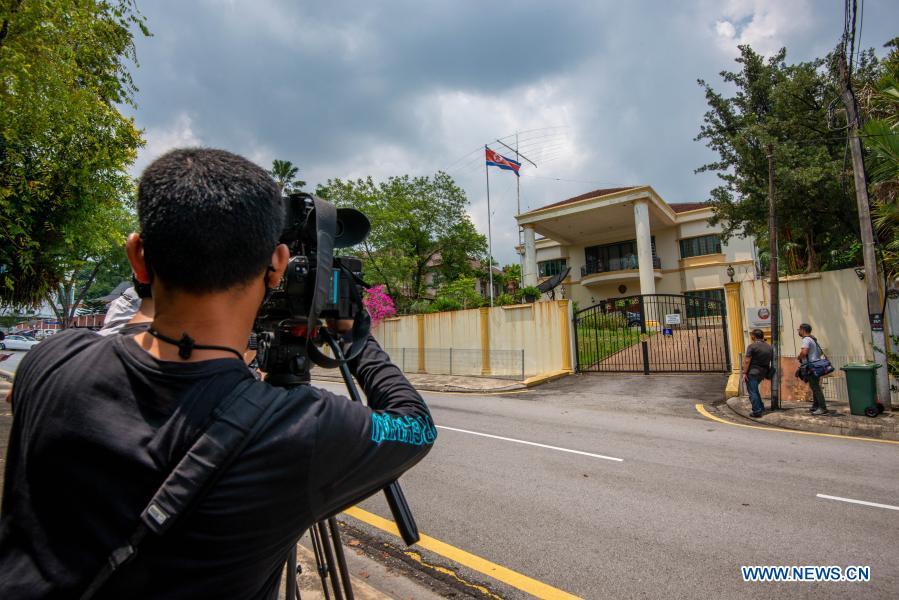 A reporter works outside the embassy building of the Democratic People's Republic of Korea (DPRK) in Kuala Lumpur, Malaysia on March 19, 2021. (Photo: Xinhua)

KUALA LUMPUR, March 19 (Xinhua) -- Malaysia "deeply regrets" the decision of the Democratic People's Republic of Korea (DPRK) to sever their diplomatic ties, the Malaysian Ministry of Foreign Affairs said Friday in a statement.

The ministry said the DPRK's decision was "unfriendly and unconstructive," adding that "Malaysia reserves our every right to respond to the decision of the DPRK in order to protect our sovereignty and to safeguard our national interest."

Malaysia "is now compelled by the decision of the DPRK to close the Embassy of Malaysia in Pyongyang" and "will issue an order for all the diplomatic staff and their dependents at the Embassy of the DPRK in Kuala Lumpur to leave Malaysia within 48 hours" from Friday, said the statement.

Earlier Friday, the official Korean Central News Agency reported that the DPRK has announced severance of diplomatic relations with Malaysia after Malaysia's top court ruled in favor of extraditing one of DPRK nationals to the United States to face money laundering charges.

The report said that the DPRK businessman was engaged in "legitimate external trade activities" and warned that the Malaysian authority would "bear full responsibility for all the consequences to be incurred between the two countries."

Malaysia's foreign ministry stressed that the extradition of the DPRK national was conducted in accordance with the principles of justice, rule of law and independence of judiciary.

The DPRK citizen was detained by the Malaysian authority in May 2019 pursuant to the provisional arrest warrant issued following allegations of conspiracy to launder money as well as violating United Nations sanctions, the ministry said.