KUALA LUMPUR, Sept. 5 (Xinhua) -- The government of Malaysia and Singapore signed an agreement on Wednesday to defer the construction of the high speed rail (HSR) project linking the two countries by two years till 2020. 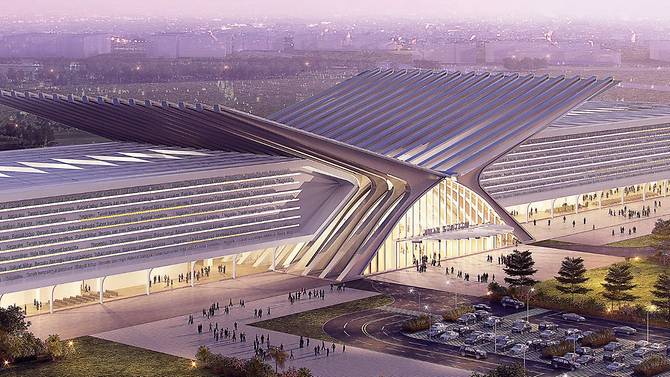 The concept design for Muar station along the KL-Singapore HSR. (Photo: MyHSR)

At Malaysia's request and in the spirit of bilateral cooperation, Singapore has agreed to suspend the construction of the HSR project for a period up to May 31, 2020, according to the joint statement issued by the two countries.

Malaysia will bear the agreed cost in suspending the HSR project, said Khaw Boon Wan, Singaporean coordinating minister for infrastructure and minister for transport, who signed and exchanged the legal documents on the deferment with Malaysia's Economic Affairs Minister Mohamed Azmin Ali in Malaysia's administration center of Putrajaya.

If the project is not resumed after the suspension period, Malaysia will bear the cost incurred by Singapore in fulfilling the HSR project, Khaw told a joint press conference with Azmin.

Although the agreed postponed period is two years, the commencement date of HSR service is expected to be pushed back to 2031, rather than the original plan of 2026, said Khaw.

Given the length of the suspension period, both sides will be calling off the ongoing international joint tender for the project, according to the joint statement.

The governments of Malaysia and Singapore signed a legally-binding pact on the project in 2016 to build a high speed rail linking Malaysia's capital of Kuala Lumpur to the city state, which would cut travel time between Kuala Lumpur and Singapore to 90 minutes once in operation.

However, Malaysian Prime Minister Mahathir Mohamad announced shortly after taking office in May that the high speed rail would be dropped, citing high cost and low usage. He later changed tone that his country would seek deferment on the project, saying it has to pay a penalty of around 500 million ringgit ($123.1 million) to Singapore for the cancellation.