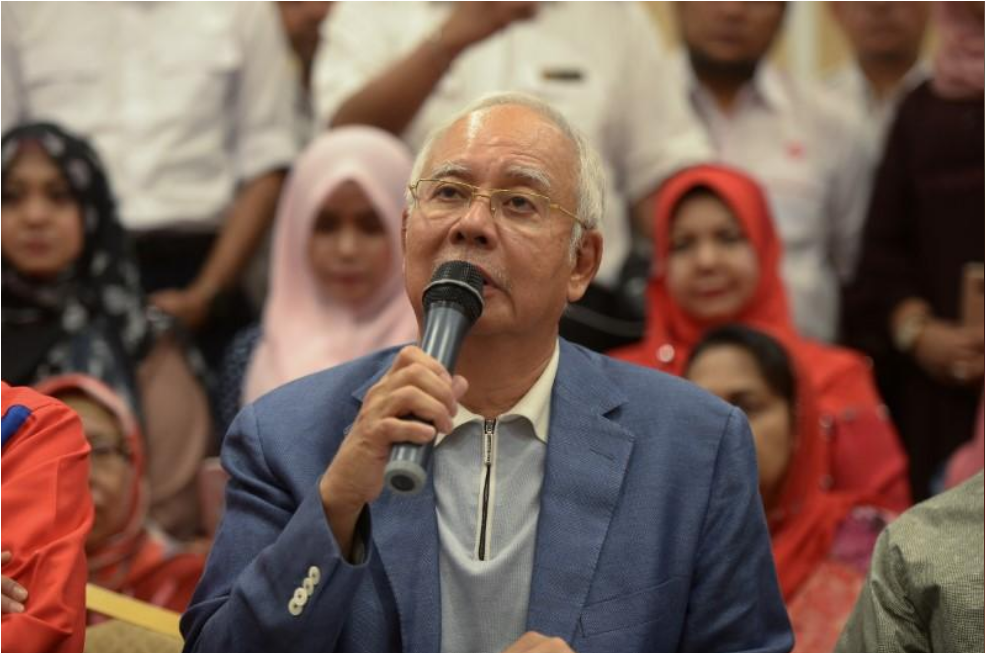 Police on Saturday raided a deluxe Kuala Lumpur apartment block at which relatives of ousted Prime Minister Najib Razak had been staying as they searched for sensitive documents the new government fears may be taken out of the country, two senior police officers said.

The swoop came as Malaysia’s new Prime Minister, Mahathir Mohamad, said he had stopped his predecessor from leaving the country because of suspected wrongdoing in connection with a multi-billion-dollar scandal at state fund 1MDB.

Police said they were acting after a complaint that a government vehicle had delivered dozens of boxes made to carry designer handbags and other items to the apartment for Najib’s wife, Rosmah Mansor.

Public disgust over alleged corruption was widely seen as one of the reasons behind the unexpected defeat of Najib’s long-ruling Barisan Nasional coalition in Wednesday’s general election.

Najib has consistently denied any wrongdoing.

A spokesman for Najib could not be immediately reached for comment. Reuters was unable to reach Najib himself, his wife, or other family members and close associates on Saturday night.

Reuters saw about 20 police officers enter the marble-floored lobby of the Pavilion Residences apartment block in the Malaysian capital, just as Mahathir was holding a news conference to announce key members of his cabinet.

They were aided by at least a dozen other plainclothes law-enforcement officers. Security personnel from the building - which is owned by Desmond Lim, a wealthy Malaysian businessman and supporter of Najib - were cooperative.

“We are looking for government documents that may have been illegally taken,” said a senior police officer, who requested anonymity as he was not authorized to talk to the media.

“The government are worried they could be sensitive and important, and could be taken out of the country.”

He declined to say whether any documents had been found and described the operation as “ongoing”.

According to the police, members of Najib’s family had been staying at the apartments, but they declined to name them.

The police action followed a complaint lodged by two leaders of the youth wing of Mahathir’s political party, Bersatu.

The police report of the complaint, reviewed by Reuters, alleges that vans emblazoned with the logo of the department of the prime minister and cabinet delivered boxes for 50 Birkin handbags to Pavilion Residences on Thursday evening.

The report alleged that the boxes showed the name of the consignee as Rosmah Mansor.

Two photos provided with the report and reviewed by Reuters showed a van with the department’s logo and a shopping trolley filled with orange boxes. The location, the date and the contents of the boxes - including whether there were any of the handbags inside - could not be ascertained from the photos.

The Birkin handbags concerned would cost $200,000 each, the complaint said.

The senior police officer only confirmed “family members” of Najib had stayed in the apartment complex when Reuters asked if Rosmah had stayed there.

Another officer involved in the operation described the persons of interest as “VVIPs”, or very, very important persons.

Both police officers said investigators were not primarily interested in the luxury items but were chasing documents that could be vital for investigations into Najib’s administration.

Kuala Lumpur’s police chief and an official police spokeswoman did not respond to requests for comment.

Najib said earlier on Saturday that he was going abroad for a week to rest, but just minutes later the Department of Immigration announced that he and his wife had been barred from leaving the country.

Mahathir, who was sworn in as prime minister on Thursday, has vowed to probe the loss of billions of dollars from state fund 1Malaysia Development Berhad (1MDB), which was founded by Najib.

US Department of Justice documents allege that $681 million from 1MDB was transferred to the personal account of a person identified as Malaysian Official One, which US and Malaysian sources have confirmed was Najib.

Najib has said the deposit was a donation by an unnamed member of the Saudi royal family which had been largely returned.