Mali president forced out in coup 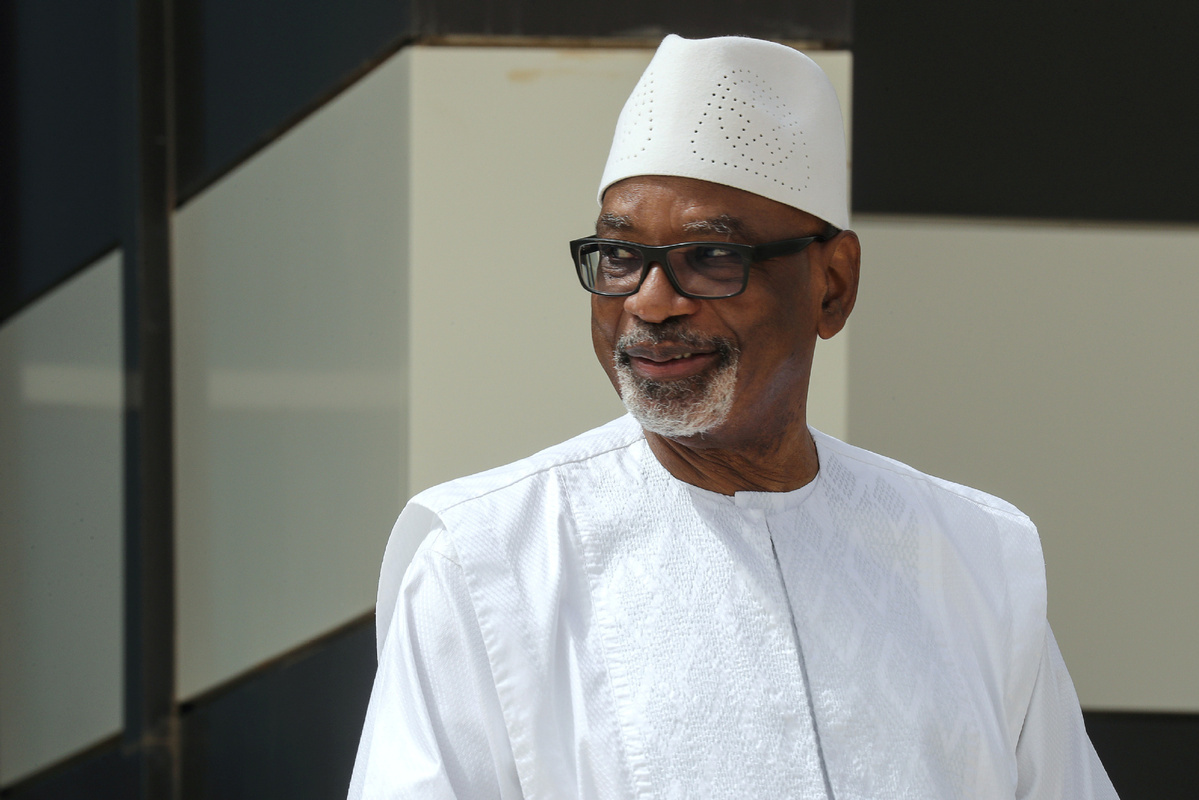 UN, African neighbors, as well as China, call for a peaceful resolution of crisis

Ibrahim Boubacar Keita, the Malian president who was detained by mutinous soldiers in a military camp near the capital Bamako, announced his resignation late on Tuesday. He also dissolved the nation's legislature and prime minister Boubou Cisse's government.

"I wish no blood to be shed to keep me in power," he said in a brief declaration broadcast by national television network ORTM from the camp in the town of Kati, adding that he didn't "hold any hatred "toward anyone.

Keita, who was elected president in 2013 and reelected five years later, was arrested along with Cisse by the rebel soldiers near Bamako on Tuesday morning, local media reported.

The leaders of the military coup said on Wednesday that they would enact a political transition and stage elections within a "reasonable time".

The National Committee for the Salvation of the People, or CNSP, "decided to take responsibility in front of the people and of history", Ismael Wague, the Malian Air Force deputy chief of staff, said on television.

The Economic Community of West African States, or ECOWAS, the African Union, the European Union and the United Nations, along with France, condemned the soldiers' arrest of Keita and demanded that constitutional order be restored, saying they would not accept an unconstitutional power switch.

United Nations Secretary-General Antonio Guterres on Tuesday called for constitutional order to be returned to Mali after Keita's arrest.

"The secretary-general reiterates his calls for a negotiated solution and peaceful resolution of their differences," UN spokesman Stephane Dujarric said.

China on Wednesday called on all relevant parties in Mali to work for the fundamental interests of the country and its people and resolve differences through dialogue.

Foreign Ministry spokesman Zhao Lijian said China is paying close attention to the situation in Mali and opposes the change of power through abnormal means, such as the use of force.

He added that China supports the efforts of relevant regional and international organizations, especially the African Union and the Economic Community of West African States, in finding a peaceful solution to the crisis in Mali.

"We call on all relevant parties in Mali to restore normal order as soon as possible, and safeguard national stability and unity," he said.

African Union Chairman Moussa Faki Mahamat said on Twitter: "I energetically condemn the arrest of President Ibrahim Boubacar Keita, the prime minister and other members of the Malian government and call for their immediate liberation."

The US envoy to the Sahel region, J. Peter Pham, said on Twitter that "the US is opposed to all extra-constitutional changes of government".

The ECOWAS, in a statement on Tuesday evening, threatened to sanction the leaders of the mutiny.

The regional grouping said it had suspend Mali's membership, and asked its members to close their borders to the country and suspend all financial connections with it.

Early on Tuesday morning, gunshots were heard in Kati, as the first indication that something was happening.

A source from the Malian Defense Ministry said an officer reportedly took advantage of the protest to incite soldiers to revolt.

For months, opposition coalition the Movement of June 5－Rally of Patriotic Forces, or M5-RFP, had been organizing demonstrations to demand Keita's resignation, accusing him of being responsible for the worsening security in the northern part of the country and Mali's economic recession. The coup occurred as the M5-RFP on Tuesday began a week of "continuous activities" of protests in Mali to force out Keita.

Xinhua, agencies and Edith Mutethya in Nairobi, Kenya, contributed to the story.