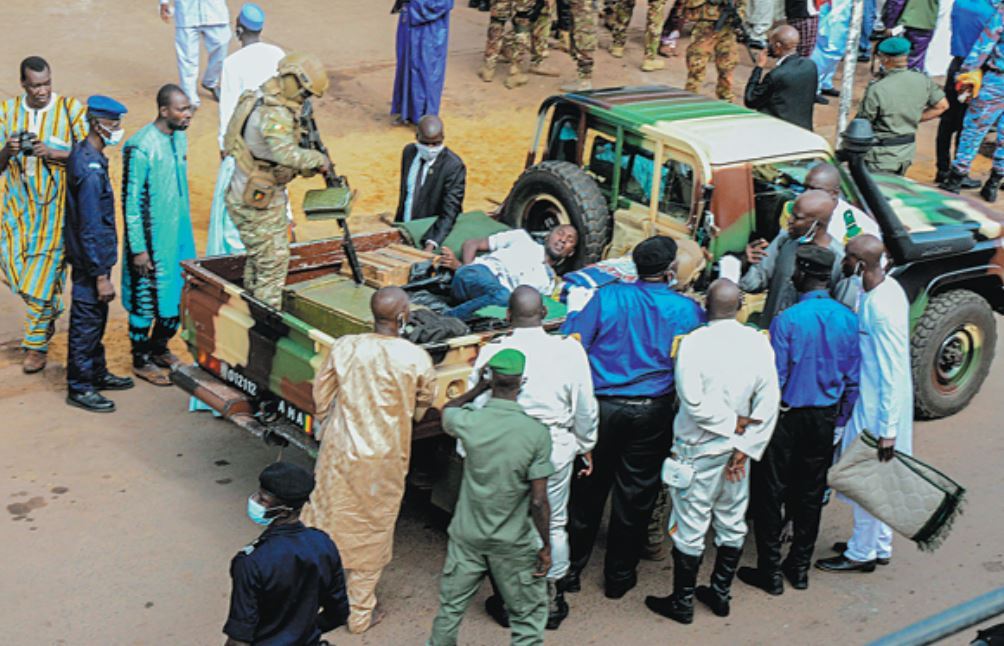 Security personnel keep watch on an alleged attacker as he lies in the back of a truck near the Grand Mosque of Bamako, Mali, on Tuesday. (Photo: Agencies)

Mali's transitional president Assimi Goita escaped unharmed after an assailant tried to stab him during prayers on Tuesday at a mosque in the capital Bamako, the West African country's presidential office said.

Security agents overpowered the assailant in the mosque, according to a statement released by the office through Twitter.

"Attempted stabbing attack against the president of the transition, Colonel Assimi Goita, at the Grand Mosque of Bamako. The attacker was immediately subdued by close security. Investigations are ongoing," the statement said.

It did not immediately advance a motive for the attack.

Later on Tuesday, Goita went on national television to announce that he was doing well following the attack.

"That is part of being a leader; there are always malcontents. There are people who at any time may want to try things to cause instability," he said.

He described the attack as "an isolated action". State television showed him later receiving well-wishers dressed in the same clothes he had on at the mosque.

According to local media, the attack happened while Goita was attending prayers to mark the Eid al-Adha festival, and the attacker tried to stab the president when the imam was leaving to sacrifice sheep.

Malian Prime Minister Choguel Maiga, who was sitting near Goita at the time of the attack, told state television that a man wielding a knife had approached the transitional leader at the end of the prayer and attempted to stab him in the neck.

"As you know the interim president is an officer of the special forces, and I believe his instinct helped prevent the aggressor from reaching his objective," Maiga said.

Goita, who orchestrated two mutinies in nine months, was sworn in as transitional president on June 7. He was initially interim vice-president after leading a coup last August that overthrew then-president Ibrahim Boubacar Keita.

In May, Goita ordered the arrests of Bah N'daw, Mali's then-transitional president and Moctar Ouane, the prime minister. Both leaders resigned while in detention before being released after Mali's constitutional court declared Goita to be the new interim president.

As a result, the African Union suspended Mali from its membership in June in response to the military mutiny and called for an unimpeded, transparent and swift return to a civilian-led transition.

Goita has made assurances that his government will keep its commitment to hand over the reins to civilians after elections scheduled for February next year.