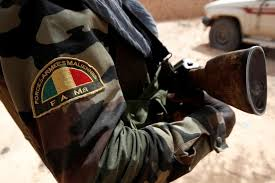 Malian soldiers killed by a French military strike in northern Mali last month were deserters who had joined an Islamist militant group, a French source close to the matter said on Tuesday.

That contradicted comments from the Malian Defense Ministry, which said on Monday that the soldiers killed in the Oct. 23 strike, a raid on a camp of the Ansar Dine militant group, had been its hostages.

The French source said the raid was carried out “on the basis of detailed intelligence against a camp that included Malians who had joined the Islamist ranks. They were hit, amongst others.”

“They were not prisoners,” the source told Reuters, declining to say how many were killed or captured in the raid.

The source accused Malian authorities of spreading propaganda in the run-up to a presidential election scheduled for November 2018.

A French defense ministry source added: “We have a real trust problem with the Malians.”

The French army said in a later statement that the head of its Barkhane operation, General Bruno Guibert, had spoken with his Malian counterpart on Tuesday to update him on information it said showed the stricken camp was “unmistakably” used as a training camp for terrorists.

“This research has at no point shown the presence on this site of Malian soldiers, whether captured or hired by the terrorist group,” the statement said, adding that the French army was ready to help Mali if it wanted to send to the site a mission to gather information.

The French army previously said that 15 members of Ansar Dine, which is loosely affiliated to other militant groups operating in northern Mali, were taken “out of action” in the raid.

The Malian government is struggling to contain Tuareg and Islamist violence in northern Mali, some of which is spreading south. Attempts to place officials in northern towns have sometimes failed, raising questions about the government’s ability to maintain stability ahead of the election.

Around 4,000 of its troops remain in West Africa’s Sahel region as part of Operation Barkhane, a cross-border anti-terrorism operation.

France has also been at the forefront of organizing a regional force as part of efforts to find a long-term strategy to exit the region.