Malta on Sunday marked the fifth anniversary of the car bomb slaying of investigative journalist Daphne Caruana Galizia, just two days after two key suspects reversed course and pleaded guilty to the murder on the first day of their trial. 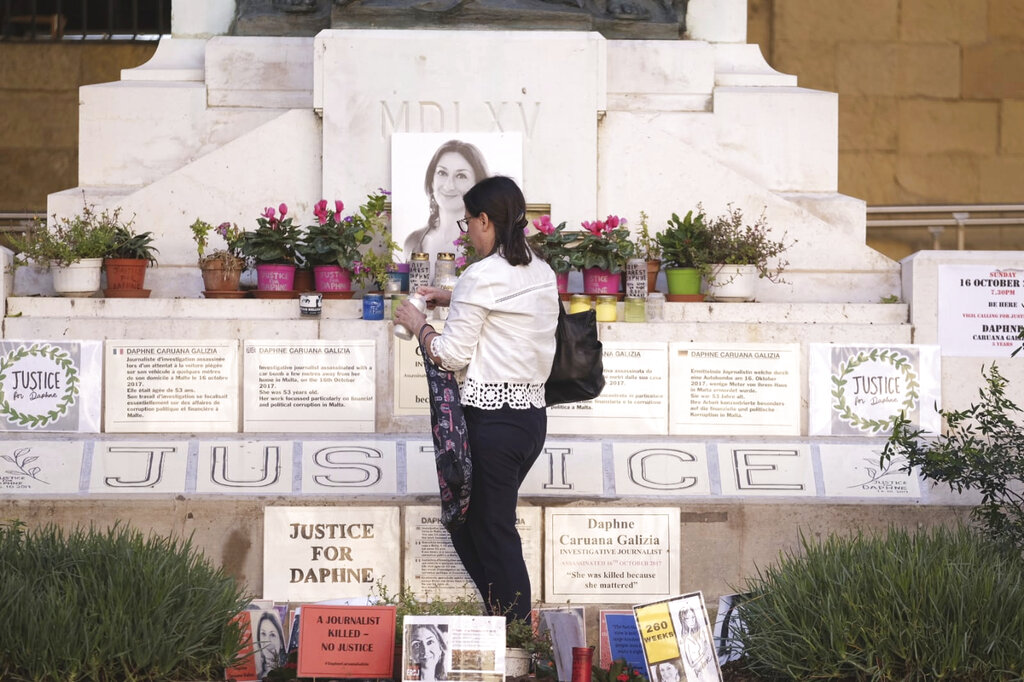 The archbishop of the small Mediterranean island nation, Charles Scicluna, celebrated a morning Mass in the small Bidnija church near where Caruana Galizia lived. Sunday’s daylong commemoration also includes a silent gathering at the site of the bombing, an evening demonstration organized by civil society organizations calling for justice and a vigil at a makeshift memorial to her in front of Valletta’s law courts.

Caruana Galizia, who had written extensively on her website “Running Commentary” about suspected corruption in political and business circles in the EU nation, was killed Oct. 16, 2017, when a bomb placed under her car detonated as she was driving near her home. The murder shocked Europe and triggered angry protests in Malta.

A 2021 public inquiry report found that the Maltese state “has to bear responsibility” for the murder because of the culture of impunity that emanated from the highest levels of government. But as recently as last month, the Council of Europe’s commissioner for human rights had decried the “lack of effective results in establishing accountability.”

When the trial opened Friday for brothers George Degiorgio, 59, and Alfred Degiorgio, 57, the alleged hitmen reversed their pleas and pled guilty to carrying out the murder and were sentenced to 40 years in prison apiece. The sentencing brought to three the number of people serving time, after Vincent Muscat pleaded guilty last year for his part in the murder and was sentenced to 15 years in prison.

The government and opposition both welcomed Friday’s sentencing as a step forward, but said full justice still needed to be delivered.

“Daphne still cannot write her blog, enjoy her children and grandchildren, potter in her garden or be with her loved ones,” the president of the EU Parliament, Roberta Metsola, wrote on social media. “Today is not justice, it is a small step. Now for those who ordered and paid for it, those who protected them and those who spent years doing everything imaginable to try to cover it up.”

Caruana Galizia, 53, was a top Maltese investigative journalist who had targeted people in then-Prime Minister Joseph Muscat’s inner circle whom she accused of having offshore companies in tax havens disclosed in the Panama Papers leak. She also targeted the opposition. When she was killed she was facing more than 40 libel suits.

There are other court cases currently under way in Maltese courts relating to the murder.

Yorgen Fenech, a top businessman with ties to the former government, is awaiting trial following his 2021 indictment for alleged complicity in the slaying and for conspiracy to commit murder. His arrest in 2019 sparked a series of mass protests in the country that culminated with Muscat’s resignation.

A self-confessed middleman, taxi driver Melvin Theuma, was granted a presidential pardon in 2019 in exchange for testimony.

The Maltese government issued a statement after the Degiorgios' guilty pleas on Friday, calling it an “important step forward” in delivering justice for a case that “represents a dark chapter in Malta’s history.” The statement said the government was committed to delivering “full justice to the Caruana Galizia family, and to the Maltese people.”

The leader of the opposition, Bernard Grech, also said the sentencing was “another step towards justice.” But he said on social media: "We must continue insisting for the whole truth to come out, We want justice to be carried out in full.”

One of Daphne Caruana Galizia’s sons, Matthew, said outside the courthouse on Friday that he was “relieved” that the two brothers had been convicted and sentenced. “Now it’s about the remaining cases,” he said.