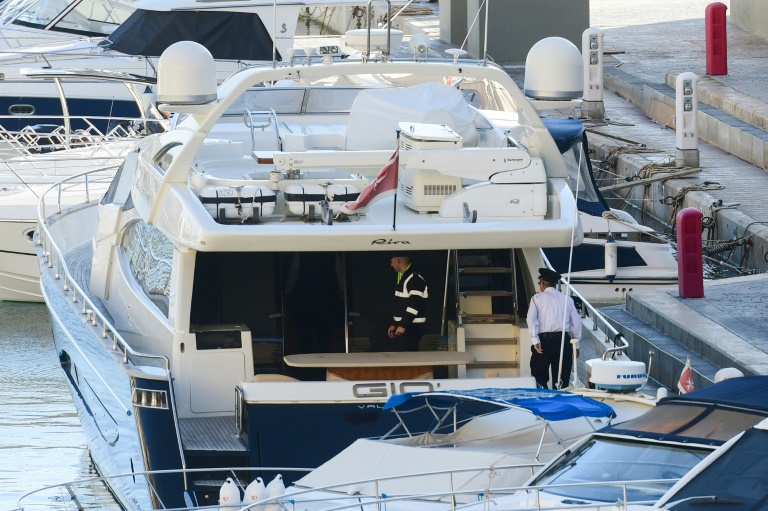 Maltese national Yorgen Fenech was detained at dawn on his yacht Gio as he tried to leave the island. (Photo: AFP)

Malta on Wednesday arrested a tycoon in connection with the murder of journalist Daphne Caruana Galizia, the day after an alleged middleman was offered a pardon to identify the mastermind behind the killing.

Maltese national Yorgen Fenech was detained on his yacht at dawn as he tried to leave Malta, a police source told AFP, in the latest development in the long-running case that has raised questions about the rule of law in Malta.

Before her 2017 murder, which sparked outrage and protests in the Mediterranean island, Caruana Galizia reported on corruption -- including alleging that a company owned by Fenech was connected to high-level politicians.

The Maltese government has faced a torrent of criticism over its handling of the case. The murdered journalist's family called Wednesday for the tourism minister and the prime minister's chief of staff to resign over alleged planned payments from Fenech's company.

Fenech was intercepted just after 5:30 am local time (0430 GMT), and his sleek white and blue yacht Gio was accompanied back to port.

"We have arrested a man as part of our investigations into the murder of Daphne Caruana Galizia," a high-ranking police source told AFP.

"He was on his boat at the time of arrest," he said, defining Fenech as "a person of interest" in the case.

Caruana Galizia, described by supporters as a "one-woman WikiLeaks", had highlighted corruption in Malta, including among politicians, before she was blown up by a car bomb.

Prime Minister Joseph Muscat said Tuesday he had promised a pardon if an alleged middleman arrested last week named the person who ordered the attack, which made headlines around the world.

Three men are facing trial for allegedly carrying out the brutal killing, but the mastermind has not yet been identified.

The 53-year-old blogger left behind a husband and three sons, who accused Muscat of filling his office with crooks and creating a culture of impunity that turned Malta into a "mafia island".

Fenech is the director and co-owner of Electrogas, which won a multi-million euro contract from the Maltese state in 2013 to build a new gas power station.

He was also director of one of the country's most powerful businesses, the Tumas Group, which runs among other things the Hilton Malta and Portomaso Casino.

But in company documents seen by AFP, Fenech resigned the post last week and was replaced by his brother Franco.

Caruana Galizia had written in her blog about 17 Black some eight months before her death, alleging it was connected to Maltese politicians.

Much of her work had been centred on what the huge Panama Papers data leak unveiled about corruption at the highest levels in Malta.

Leaked emails revealed in court appeared to show that Panama companies owned by then energy minister Konrad Mizzi and Keith Schembri, the government chief of staff, stood to receive payments from 17 Black.

The alleged planned deposits into the two offshore companies were for unspecified services.

"It's time for Mizzi and Schembri to resign and be placed under surveillance," son Andrew Caruana Galizia said on Twitter after Fenech's arrest.

If Muscat had not protected the pair, "my mother would still be alive", he wrote.

Mizzi is currently the tourism minister.

Andrew's brother Paul tweeted that "we got here in spite of Joseph Muscat", as a protest was called for later Tuesday outside the prime minister's office.

The prime minister said Wednesday there was no evidence he knew of linking politicians to the murder, and insisted it was his order for police to increase surveillance that prevented Fenech's "potential escape".

Malta had repeatedly refused to open a public inquiry into the killing but made a surprise U-turn in September and appointed a retired judge to head the probe.