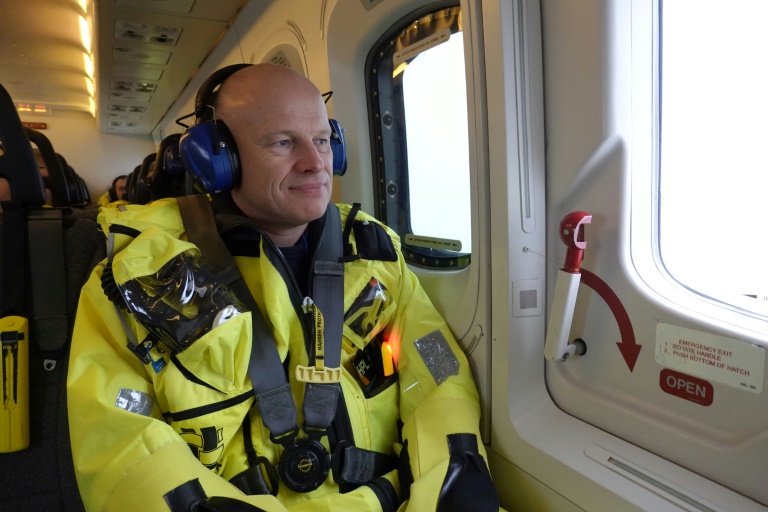 Norwegian oil executive Arne Sigve Nylund says that at term, the new oil field will account for more than one quarter of total output from Norway's continental shelf.  (Photo: AFP)

"At its peak, it will represent approximately 25-30 percent of the total oil production from the Norwegian continental shelf," he says as he takes reporters on a tour of the Johan Sverdrup oil field, hardhat firmly secured on his head.

Fifty years after the Scandinavian country first struck black gold, the field holds the promise of another half-century of oil business, despite growing opposition to fossil fuels.

That is music to the ears of Norway's oil sector, hit by a continuous decline in production since the turn of the millennium and a drop in oil prices since 2014.

According to Equinor, which is 67-percent owned by the Norwegian state, the field represents a windfall of 1.43 trillion kroner ($157 billion, 141 billion euros), with more than 900 billion due to end up in state coffers.

A windfall that almost ended up in other hands: test drilling in the 1970s by French oil company Elf, now a part of Total, failed to find the oil field by just a few metres.

Norway's King Harald will formally inaugurate the field in January, but production began back in early October and 350,000 barrels are already being pumped up each day.

That "probably" makes it the most productive field in western Europe, according to the Norwegian Petroleum Directorate.

When it hits its peak in late 2022, the field -- which also includes companies Lundin of Sweden, Aker BP of Norway, and France's Total -- is expected to produce almost double that, or 660,000 barrels per day.

The installation -- consisting of four platforms, soon to be five, connected by suspended walkways -- are so large that workers use big blue three-wheeled scooters to get around.

The site is run on electricity from land, supplied by a 160-kilometer (100-mile) underwater cable.

And it's clean energy, sourced from hydroelectric dams.

At the production stage, each barrel has a carbon footprint 25 times lower than the global average, says Rune Nedregaard, head of operations at Johan Sverdrup.

"That's important in a climate perspective. Considering we do need oil, it's important to produce that oil as efficiently as possible."

But climate change knows no borders, and when the oil is burned, it is just as polluting as any other petrol, argue environmental activists.

"It's the oil policies that lay the groundwork for climate policy, and it should be the other way around," charges the head of the Norwegian branch of Friends of the Earth, Silje Ask Lundberg.

Oil and natural gas have enabled the Scandinavian country to amass the world's biggest sovereign wealth fund, with more than 10 trillion kroner ($1 trillion) stashed away for future generations.

But a growing number of Norwegians want the country to speed up its transition to a green economy, opinion polls suggest, and more and more political movements have called for the oil sector to be curtailed or even phased out entirely.

Two NGOs have sued the state to get it to cancel drilling licences recently awarded in the Arctic. Having lost their case in district court, the NGOs now await a verdict in the appeals court.

"The government can no longer ignore the dangerous impact its exported oil is having on the climate," stresses Frode Pleym, the head of Greenpeace Norway, one of the plaintiffs in the lawsuit.

"Oil is oil, no matter where it is burned."

To limit global warming to 1.5 degrees Celsius in line with the Paris Agreement, scientists say it will be necessary to be carbon neutral by 2050.

Norway sees itself as a climate champion, heavily subsidising the purchase of electric cars and generously funding efforts to protect the rainforests.

But it is one of only a few countries in Europe that has higher greenhouse gas emissions now than in 1990.

The Norwegian oil and gas industry has seen emissions soar by 73 percent during that period, and they now account for 27 percent of the country's total emissions, official statistics show.

The government has insisted on the need to prepare the economy for the post-oil era, but at the same time it continues to award a record number of exploration licences.

Clearly, it's tricky to cut off a cash cow that finances a fifth of the budget.

"The person who will switch off the lights on the Norwegian continental shelf is not born yet," Prime Minister Erna Solberg said in late 2018.