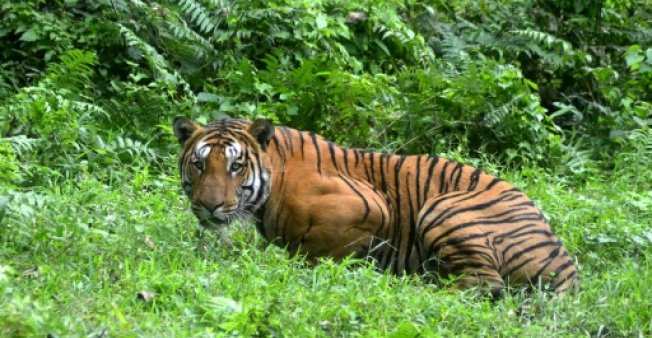 Endangered elephants and tigers kill on average one person a day in India, according to government figures. (File photo: AFP)

NEW DELHI, Nov. 3 (Xinhua) -- A man-eater tigress which is alleged to have killed 14 people over the last one and a half years was shot dead in India's western state of Maharashtra, officials said Saturday.

The tigress was killed Friday night after three months of massive search in forest area of Yavatmal district, about 678 km east of Mumbai, the capital city of Maharashtra.

The six-year-old tigress given the name Avni had two cubs.

Forest officials had pressed in ground personnel, drones, elephants and expert shooters to hunt down the tigress, after getting the orders of shoot at sight for the wild animal on Sept. 4.

"The man-eater animal has been killed," a senior forest official posted in Nagpur said. "The details of the operation to hunt her will be shared during a media briefing later in the day."

Reports said so far there is no information about her two cubs.

Forest officials said the tigress, along with two of her cubs, had consumed 60 percent of a human corpse, which ultimately led to the decision of declaring her as a "man-eater" and passing of orders to kill her at sight.

However, the government order to kill tigress generated a flurry of online petitions.

The decision was challenged by animal rights activists in the Bombay high court, which disposed of the application seeking stay against orders to shoot the tigress.

Officials said the post-mortem of the tigress would be conducted at Nagpur's Gorewada rescue center.

Wildlife officials said wild animals stray into residential areas usually in search of food. However, the human presence makes them insecure, following which they resort to attacking people. At times these creatures are attacked by scared villagers in retaliation which also proves fatal for them.

There are strict laws in force in India against the killing of wild animals.

Wildlife experts say mass urbanization, denudation of forests, encroachment of forestland, vanishing of buffer zones in the forests, among others, are responsible for increasing conflicts between humans and animals.

Every year many people get killed or injured in the growing man-animal conflict across India.