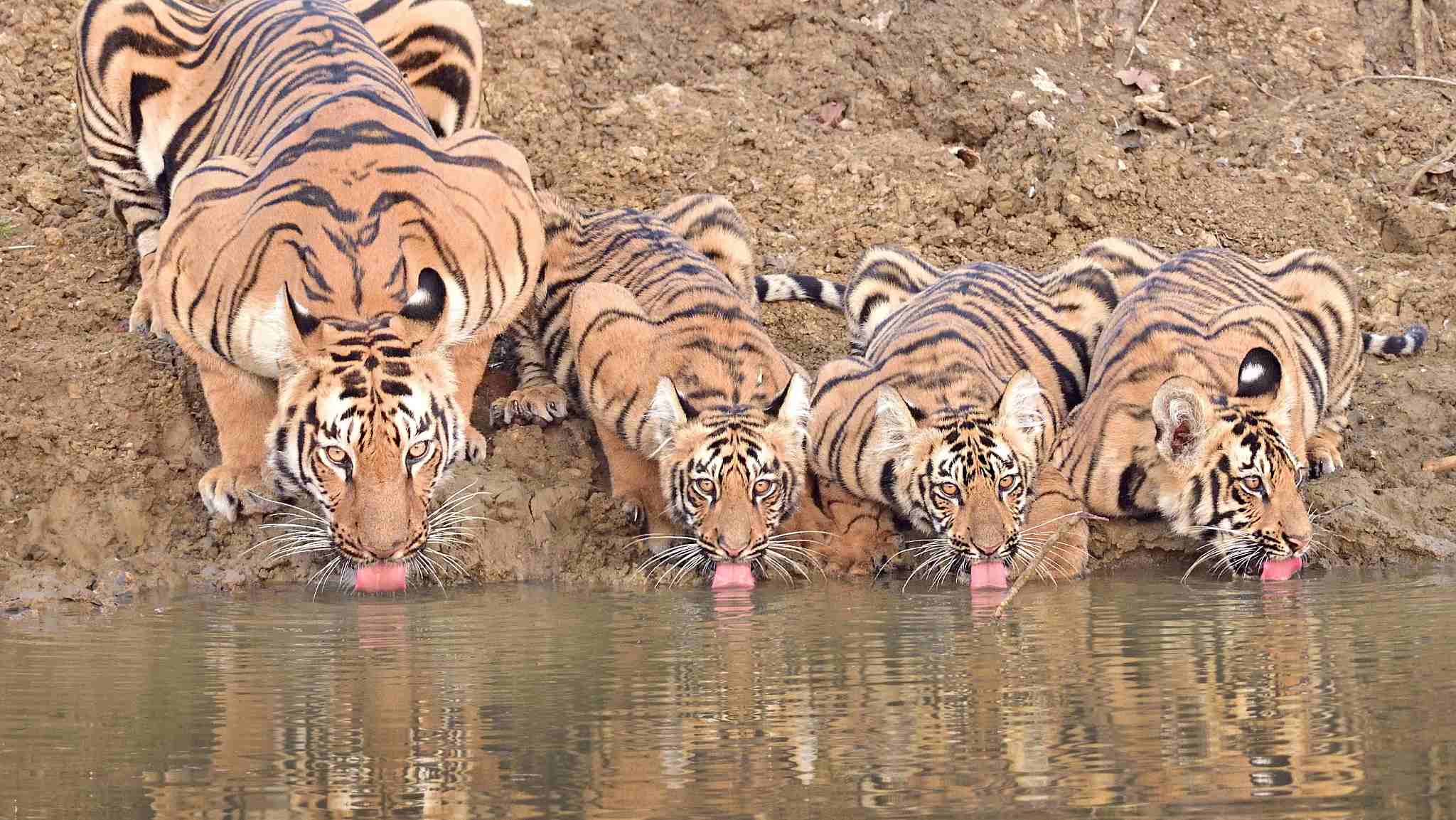 A tigress and her cubs quench their thirst at a pond in Tadoba Andhari Tiger Reserve in Maharashtra, India. (Photo: VCG )

A man-eating tigress that reportedly killed more than 13 people in India was shot dead on Friday, leading to a verbal spat among senior ministers in the government.

A large number of deaths in the last two years forced the government to initiate a massive search operation. More than 150 people combed the forested areas of Nagpur district in Maharashtra to track and capture the tigress.

Around 100 camera traps, drones, sniffer dogs were deployed and officials even sprayed Calvin Klein perfume – pheromones of which is believed to attract big cats – to capture the tigress.

Later, India's apex court authorized the shooting of the big cat only if efforts to tranquilize the animal failed. Ending the months of a chase, T-1 was shot dead by Ashgar Ali Khan, son of a famous hunter Nawab Shafath Ali Khan.

“His son was not authorized to kill. This is patently illegal,” the minister tweeted.

Despite the forest officials being committed to tranquilize, capture and quarantine the tigress, the trigger-happy shooter has killed her on his own, under orders of Sudhir Mungatiwar, environment and forest minister from Maharashtra, she added.

Striking back at the allegations, Mugatiwar told PTI that the tigress was shot dead under extreme circumstances as a measure for self-defense. “Avni was shot dead as all attempts to tranquilize her failed, and she attacked the officials.”

A few wildlife observers pointed out that several other legal and government-related protocols were violated during the hunt. As a cover-up, the tranquilizer dart was pinched in the dead body of Avni. There were no veterinarians present during the hunt, a condition specified by the court, they said.

People for the Ethical Treatment of Animals (PETA) in a statement maintained, in this case, legal instructions were overlooked in resolving the man-animal conflict “Avni was killed illegally satisfying a hunter's lust for blood, plain and simple, in possible contempt of court.”

The organization had also submitted a petition urging Maharashtra wildlife department to re-consider its “shoot-at-sight” decision to kill the tigress.

With only about 3,900 remaining in the wild, India is home to nearly 60 percent of global tiger population.  The rising population of big cats and their shrinking habitat is leading to conflicts. “This is the third tiger being killed on directions of the environment minister,” Maneka added.

Avni leaves behind two nine-month-old cubs; the search team is trying to locate them.