Man in court over 'plot' to kill Dutch populist Wilders

A man briefly appeared in a Dutch court Thursday on suspicion of wanting to assassinate far-right politician Geert Wilders after he said he planned to stage a Prophet Mohammed cartoon competition. 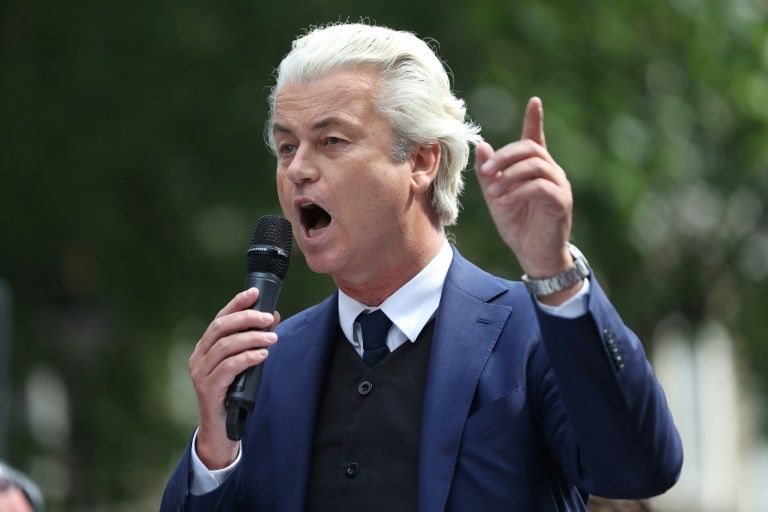 Geert Wilders in June announced plans to stage a cartoon competition in parliament later this year to draw the Prophet Mohammed. He claims he has received 200 entries so far (Photo: AFP)

The 26-year-old man "is being suspected of committing a terrorist act, planning to commit murder and incitement," Dutch prosecutors said in a statement.

Police on Tuesday arrested the man at one of The Hague's main railway stations after he posted a film on Youtube saying he planned an attack on Wilders or the Dutch parliament.

The man, believed to be from Pakistan, also called on other Muslims for support.

"Authorities are taking the threat very seriously," the Dutch public prosecution service said in the statement.

"The investigation is ongoing" and the man is in custody "with maximum restrictions" meaning that he is only allowed to consult his lawyer.

Prosecutors did not release the suspect's name, saying at this stage they were reluctant to release further information.

He will remain in custody for another two weeks before a next appearance.

Plans by Wilders, an avowed anti-Islamist, to hold a cartoon competition at his PVV party's offices in parliament have stirred anger among Muslims, particularly in Pakistan.

The Netherlands on Wednesday updated its travel advice to Pakistan urging its citizens "to avoid demonstrations in Islamabad, Lahore and Karachi".

A planned trade mission organised by the Dutch government and private companies in early November has also been postponed "until a later date", the government-run Netherlands Enterprise Agency said in a separate statement.

Wilders in June announced plans to stage a cartoon competition in parliament later this year to draw the Prophet Mohammed. He claims he has received 200 entries so far.

The Dutch competition's winner is set to receive a cash prize, Wilders said adding that the competition is not to "provoke or insult".

"We are organising the competition because the freedom of speech is the most important freedom we have," he said.

Dutch Prime Minister Mark Rutte however has distanced his government from the cartoon competition, saying it was not a government initiative.

Rutte last week said he supported free speech in the Netherlands but believed the cartoon competition "not respectful" and aimed only to provoke.

"The aim is to provoke, rather than stimulate a debate about Islam," Rutte said -- but he added Wilders was free to air his opinions.