Man who sat at Pelosi's desk arrested, US House moves to impeach Trump

The man pictured sitting at U.S. House Speaker Nancy Pelosi's desk during Wednesday's riots in the U.S. Capitol has been arrested and charged with three federal counts, according to federal prosecutors on Friday.

Richard Barnett of Arkansas was taken into custody Friday morning in Little Rock, and he was charged with knowingly entering and remaining in restricted building grounds without authority, violent entry and disorderly conduct on Capitol grounds as well as the theft of public property, officials said.

In a related development, Acting Attorney General Jeffrey Rosen announced the FBI would team up with Washington's police department to jointly investigate the death of Capitol Police Officer Brian Sicknick, who was injured while defending the U.S. Capitol on Wednesday. 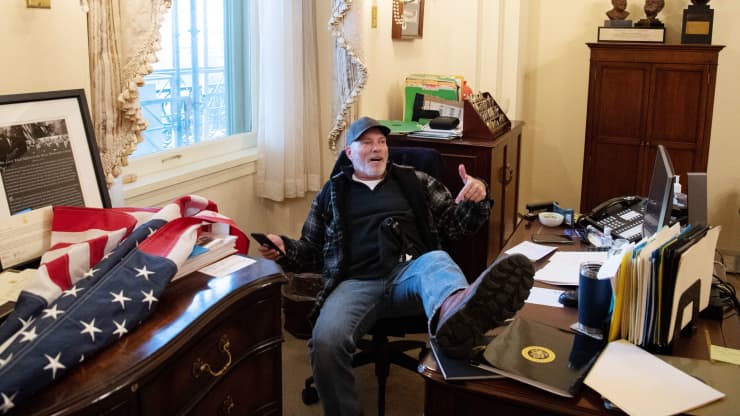 A supporter of U.S. President Donald Trump sits inside the office of House Speaker Nancy Pelosi as he protests inside the U.S. Capitol in Washington, D.C., January 6, 2021. /AFP

"Just because you've left the D.C. region, you can still expect a knock on the door if we find out you were part of the criminal activity at the Capitol," Steven D'antuono, the FBI Washington Field Office's assistant director in charge, told reporters in a telephone news briefing.

The Justice Department on Friday released details on 13 defendants who were charged in the U.S. District Court for the District of Columbia for their roles in connection with the Capitol riots.

They included Cleveland Meredith, who was charged with threatening Pelosi as well as possession of an unregistered firearm and unregistered ammunition, and Richard Barnett, the Gravette, Arkansas, man who was photographed sitting at Pelosi's desk and is also known as Bigo.

The shocking images of Mr. Barnett with his boots up on a desk in the speaker of the House's office on Wednesday was repulsive," Rosen said in a statement. "Those who are proven to have committed criminal acts during the storming of the Capitol will face justice."

Prosecutors also charged Nick Ochs, a prominent member of the Proud Boys, with being in the Capitol unlawfully, based in large part on a photo he posted on Twitter of himself smoking a cigarette in the Capitol along with the caption "Hello from the Capital lol."

Among others facing charges were Lonnie Coffman of Falkville, Alabama – whose truck parked near the Capitol and inspected by police contained 11 Molotov cocktails as well as firearms – and Mark Leffingwell, who is accused of assaulting a police officer.

On Friday, Pelosi said she has instructed the Rules Committee to be prepared to move forward on a motion to impeach U.S. President Donald Trump if the Republican does not resign after deadly pro-Trump riots at the U.S. Capitol.

"It is the hope of members that the president will immediately resign," Pelosi said in a statement on her meeting with the House Democratic Caucus. "The House will preserve every option... With great respect, our deliberations will continue."