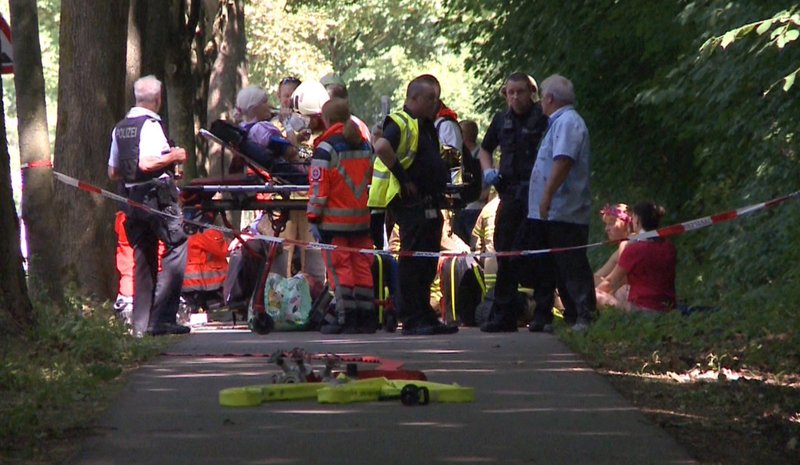 A man armed with a kitchen knife attacked passengers Friday on a crowded city bus in northern Germany before being overpowered and arrested, authorities said. Ten people were injured, three of them seriously.

Authorities had no immediate information on the assailant’s motive for the afternoon attack on a city bus in Luebeck, near the Baltic coast northeast of Hamburg, but said they had no indication that he was politically radicalized or had any terrorist background.

Investigators found a flammable substance in a backpack aboard the bus, but no explosives.

The incident started when the assailant set fire to the backpack, prosecutor Ulla Hingst said at a Friday evening news conference in Luebeck.

The driver told investigators that he stopped the bus and opened all the doors to let passengers out after noticing the fire in his rear-view mirror.

He then walked back to find out what was going on and was hit by the assailant, Hingst said. As the suspect left the bus, he stabbed people around him with a 13-centimeter (5-inch) kitchen knife. The attacker was overpowered by passengers outside the vehicle, then quickly arrested by police nearby.

Five of the victims were still hospitalized Friday evening.

A man apparently armed with a knife attacked passengers on a busy bus in a northern German city on Friday, before being overpowered and arrested, authorities said. Police said a number of people were injured. (July 20)

The suspect is a 34-year-old man who lives locally. Hingst said he is a longtime German citizen who was born in Iran.

She added the motive is “still open” and “we are investigating in all directions.”

Prosecutors will seek to have the man kept in custody pending possible charges of bodily harm and attempted arson, Hingst said.

The bus was traveling from Luebeck to the neighboring seaside resort of Travemuende, where an annual regatta, the Travemuender Woche, was opening later Friday.

Schleswig-Holstein’s state interior minister, Hans-Joachim Grote, said there was no reason to believe that there was an increased risk to the regatta but police presence there was stepped up as a precaution.