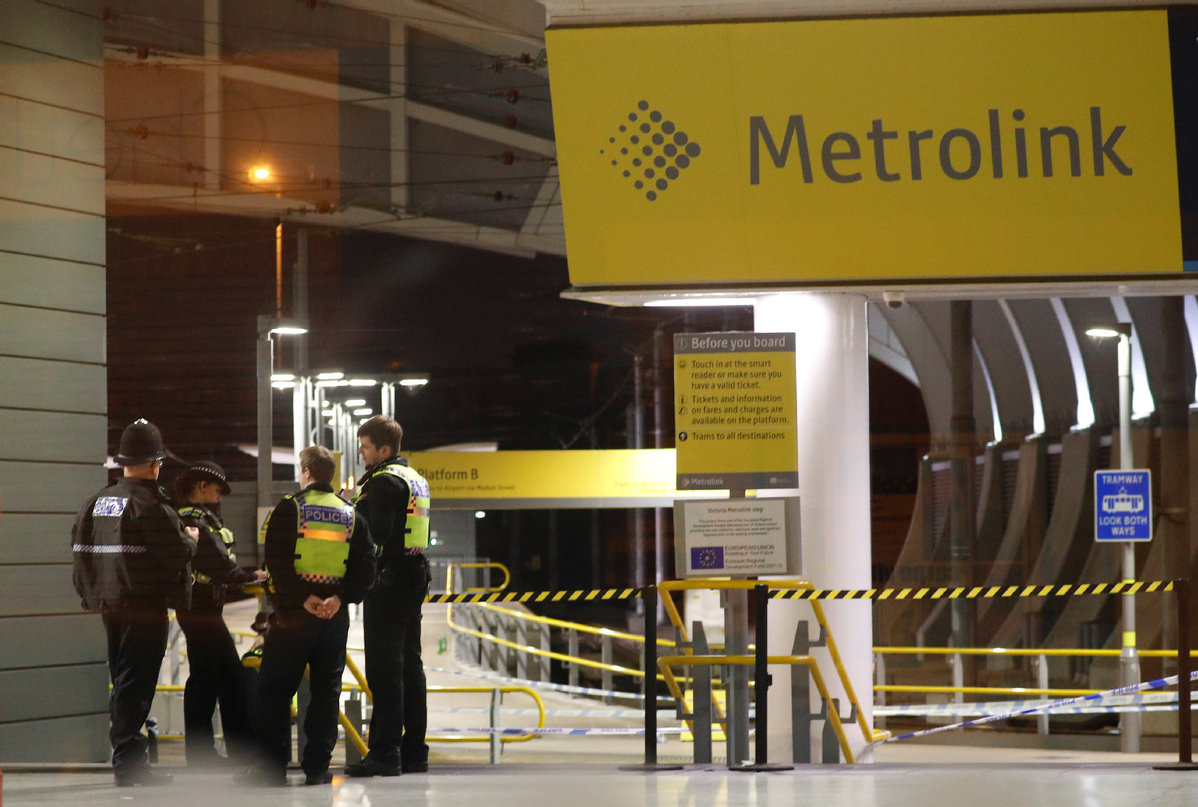 Police officers stand at the end of a tram platform following a stabbing at Victoria Station in Manchester, Britain, on Tuesday. (Photo: Reuters)

Police in the British city of Manchester are questioning a man arrested in the New Year's Eve stabbing of three people at a train station and treating it as a terrorist attack, authorities said on Tuesday.

Greater Manchester Chief Constable Ian Hopkins said a man and a woman suffered "very serious" injuries in the attack and remained in the hospital. Both have abdominal injuries and the woman also has injuries to her face.

A police sergeant who was stabbed in the shoulder has been released.

The busy train station is next to Manchester Arena, where a suicide bomber killed 22 people at an Ariana Grande concert in 2017.

Police have detained the suspect, who has been arrested on suspicion of attempted murder, but not yet provided a motive for the stabbings. A witness said the suspect shouted Islamic slogans during the frenzied attack.

Assistant Chief Constable Russ Jackson said police believe they have identified the suspect and are searching his home in the Cheetham Hill neighborhood of Manchester.

BBC producer Sam Clack, who was on the train platform, said he heard a "bloodcurdling scream" when the attack started and saw a man dressed in black having what looked like a fight with two victims.

Clack said he heard the man with the weapon shout Islamist slogans during the assault, and then the attacker was chased by police.

"He came toward me. I looked down and saw he had a kitchen knife with a black handle with a good, 12-inch blade," Clack said, adding that his reaction "was just fear, pure fear".

Clack said police used pepper spray and a stun gun to bring the man down.

Police said there's no indication that any others were involved in planning or assisting the attack. The investigation is being led by Britain's counterterrorism police.

British police tried to reassure the public that the area was safe despite the attack.

The incident is "not ongoing" and there is "currently no intelligence to suggest that there is any wider threat", Assistant Chief Constable Rob Potts said.

"I know that the events of last night will have affected many people and caused concern," Hopkins said. "That the incident happened so close to the scene of the terrorist attack on May 22, 2017, makes it even more dreadful."

British Prime Minister Theresa May expressed concern for the victims and thanked emergency workers for their "courageous response".

Extra police officers were on the city's streets on Tuesday as a precaution.

Britain's official threat level has long been set at "severe", indicating that intelligence analysts believe an attack is highly likely.