WORLD Manila goes into lockdown and Beijing offers to help

Manila goes into lockdown and Beijing offers to help 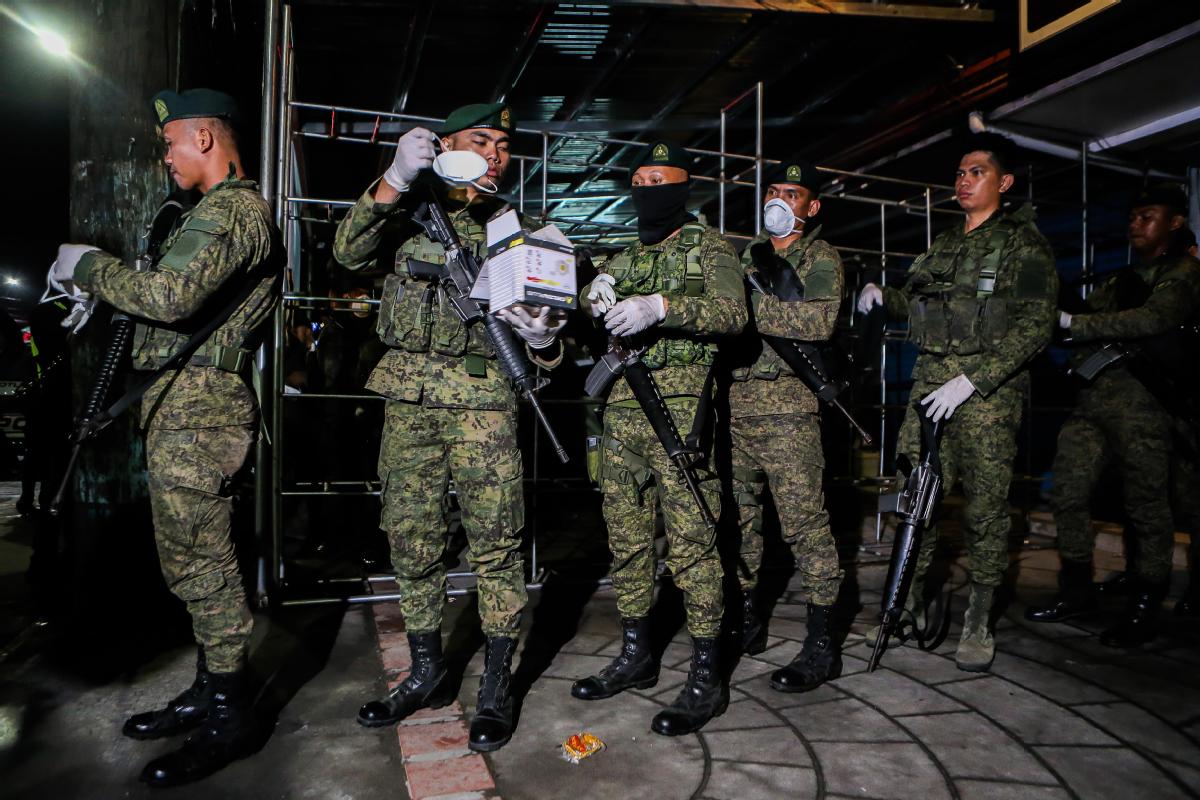 Soldiers at a checkpoint in Valenzuela city, the Philippines, on Sunday as a month-long curfew was imposed to curb the spread of the novel coronavirus in Metro Manila. (Photo: Xinhua)

Philippine President Rodrigo Duterte has praised China's willingness to help in fighting the novel coronavirus outbreak as Metro Manila begins its 30-day lockdown to contain the spread of the virus.

"President Xi Jinping, for all of his goodness to us, wrote me a letter and said that he is willing to help (if needed)," Duterte said in a briefing held on Thursday night.

Chinese Ambassador to the Philippines Huang Xilian, in a call on Wednesday to Duterte, said: "China stands ready to join hands with the Philippines to overcome the current difficulties, and is willing to extend assistance to the best of its capabilities in line with the needs of the Philippine side."

Duterte extended sympathies to the Chinese people affected by the virus, and expressed full confidence that China will defeat the epidemic under the leadership of President Xi.

On Sunday, in Metro Manila, which spans 16 cities and is home to over 13 million people, thousands of police officers were deployed in various areas to enforce a community quarantine, barring people from leaving and entering the capital region.

Duterte announced on Thursday that the capital region was being be put under "community quarantine" in light of the rising number of COVID-19 cases in the country. The Philippines reported 140 confirmed cases and 11 fatalities on Sunday.

Authorities said some commuters were exempt from this directive. They included health personnel, authorized government officials, workers who live outside Metro Manila and people traveling for medical and humanitarian reasons.

Separately, some dioceses in Metro Manila have suspended masses for at least seven days and shopping malls have shortened their opening hours in line with the social distancing policy.

The mayors in the region imposed a curfew from 8 am to 5 pm to keep people at home.

And the Department of Transportation has imposed a passenger capacity limit and a one-seat-apart policy in all forms of public transport including trains, taxis and buses.

Anthony Leachon, a health reform advocate and former president of the Philippine College of Physicians, supports the lockdown, and said it is about "the greater good".

"You will have saved lives," he said, referring to the potential outcome after one month.

Though the limits may disrupt regular activities and dampen economic growth, "this challenge will force us to change our routines and require us to modify our behavior", Cabinet Secretary Karlo Nograles said in a news briefing on Friday.

"We have to understand that it cannot be business as usual if we hope to overcome this public health threat."

The Secretary of Trade and Industry Ramon Lopez said that despite travel restrictions and work disruption, daily business activities would continue in the capital.

Companies, banks and malls would remain open, while deliveries of food and non-food items sourced outside Metro Manila would be allowed to enter to ensure adequate supply.