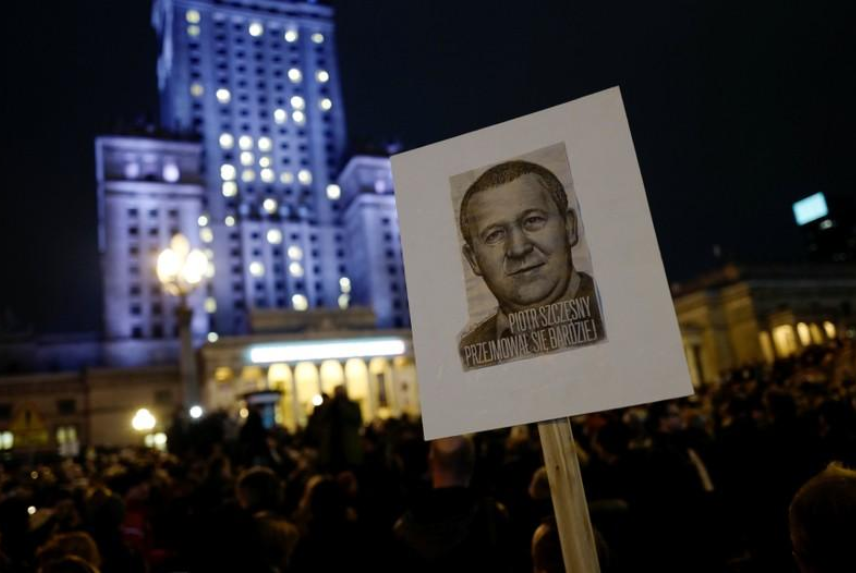 People gather in front of the Palace of Culture and Science to mourn a man who died after setting himself on fire in anti-government protest in Warsaw, Poland November 6, 2017. They hold paper with drawing depicting a man died. REUTERS/Kacper Pempel

Several hundred people walked in silence on Monday night in Warsaw in memory of a 54-year-old man who died late last month after setting himself on fire in protest against the ruling conservatives’ policies.

Piotr Szczesny, a married father of two from the small town of Niepolomice in Poland’s south, died on Oct. 29, after setting himself on fire on Oct. 19 in front of the Palace of Culture, a Warsaw landmark.

The Polish government, led by the right-wing Law and Justice party (PiS) which came to power two years ago, has been criticized by the European Commission for policies Brussels says jeopardize the freedom of the media and independence of courts.

“I love freedom above all,” Szczesny, wrote in a leaflet, copies of which he scattered around himself. “That’s why I decided to commit the act of self-immolation and I hope that my death will shake the conscience of many people....”

One of the protesters on Monday, Jacek Rabinski, a 38-year-old training to be a paramedic, said that he mourned Szczesny’s life and was full of respect for his decision.

“We are here because we are worried about the situation in our country, the political situation,” Rabinski said. “Many people live in the conviction that politics doesn’t concern them. Politics is us, we ordinary people create politics.”