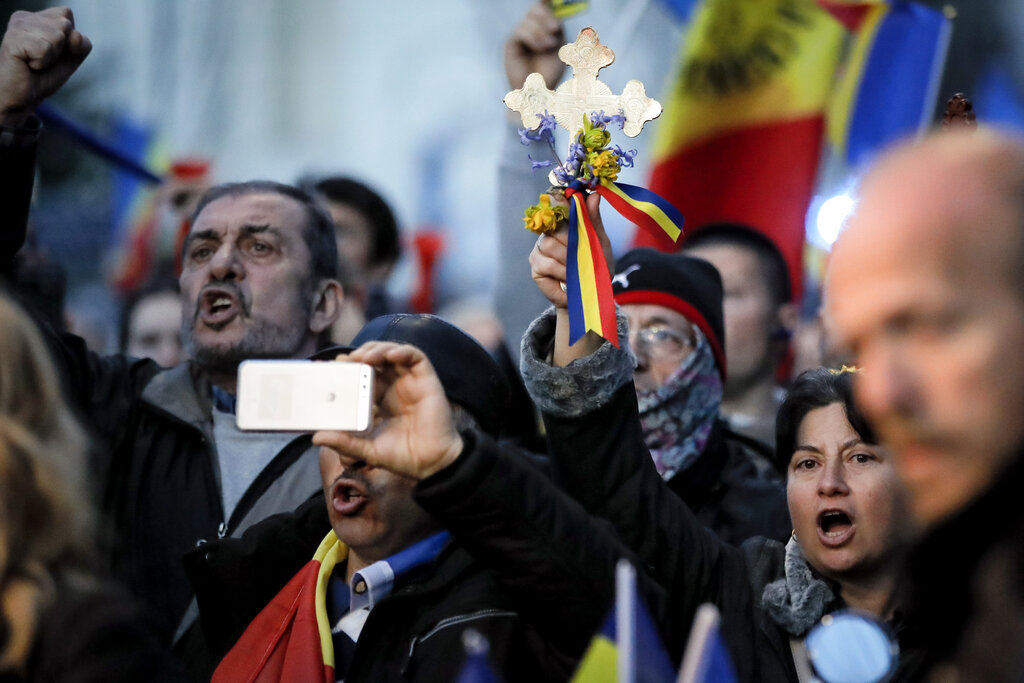 Marchers took to the streets Saturday in the Romanian capital of Bucharest to protest restrictive measures to fight the spread of COVID-19 even as new daily infections and deaths rose in the European Union nation.

About 1,000 people converged on Victory Square and University Square, expressing frustration with an earlier curfew and shop closures that took effect at the end of March. Many demonstrators waved tri-color Romanian flags and chanted “Freedom!” and “Down with the government!”

“We came to fight against this state of alert that buries all our rights and freedoms,” Dumitru Balan, leader of the civic movement Action for the Nation, told The Associated Press.

“We do not agree with compulsory vaccination, with wearing a mask on our faces … the quarantine of cities, online schooling, the closure of churches, playgrounds, restaurants and shops," he said.

Romania does not have compulsory vaccinations.

The protest was held on the same day that Romania passed the milestone of having 1 million confirmed COVID-19 cases. Hospital intensive care units are struggling to cope with the record demand of just under 1,500 COVID-19 patients and 12,000 others are in other wards.

“There are now very severe patients admitted in our clinical ward that normally would require intensive care … we don’t have enough ICU beds available and patients are waiting with sub-optimal care,” Dragos Zaharia, a pneumologist at Marius Nasta Institute, told the AP. “We are at risk of being accused of malpractice."

The protesters halted outside Cotroceni Palace, where President Klaus Iohannis resides, and called for an early election.

“I think Romania has a perfect storm of conditions that create this climate of anti-restriction protests,” Dani Sandu, a sociologist affiliated with the European University Institute, told the AP. “Romania is a society with low levels of trust in public institutions."

On Friday evening, authorities transferred patients in the middle of the night from Bucharest’s Foisor Orthopedic Hospital to other facilities as it was turned into a COVID-19 hospital.

An official from the governing National Liberal Party, Ben Oni Ardelean, called the situation a “circus” and said he will urge that Health Minister Vlad Voiculescu be fired.

Romania has recorded 25,006 deaths in the pandemic.