MANILA, June 30 (Xinhua) -- Ferdinand Romualdez Marcos was sworn in as the 17th president of the Philippines on Thursday at the National Museum in Manila in front of thousands of people who witnessed the inauguration. 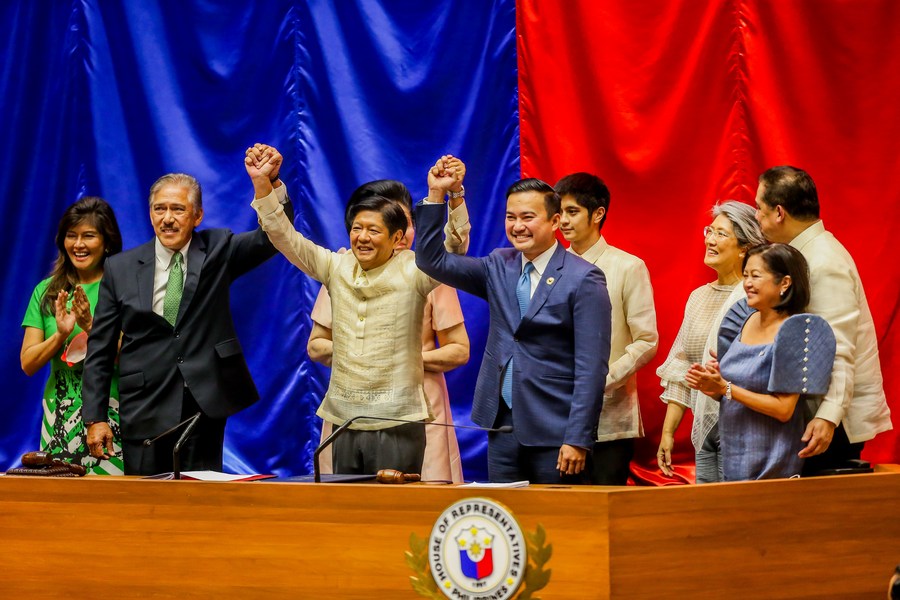 President-elect Ferdinand Romualdez Marcos (front, C) is seen on the rostrum with Senate president Vicente Sotto (front, L) and House speaker Allan Velasco (front, R) during his proclamation at the Philippine House of Representatives in Quezon City, the Philippines, on May 25, 2022. (Photo: Xinhua)

The 64-years-old son of former President Ferdinand Marcos, wearing a native Barong Tagalog formal shirt, took his oath of office as his 92-year-old mother Imelda and family members look on.

More than 15,000 police and security personnel have been deployed across the capital for the inauguration. Foreign dignitaries, diplomats, and three former Philippine presidents, Fidel Ramos, Joseph Estrada and Gloria Macapagal-Arroyo, attended.

Ahead of the swearing-in, outgoing President Rodrigo Duterte received Marcos at the Malacanang presidential palace.

On May 25, the Philippine Congress proclaimed Marcos winner of the May 9 presidential election, with over 31 million votes or more than 58 percent of the votes cast. He succeeded Duterte who has finished his six-year term. The Philippine constitution permits the president to serve a single six-year term.

The Marcos administration needs to address a slew of problems besetting the Philippines, such as unemployment, inflation, a high debt-service ratio to the gross domestic product (GDP), as well as rocketing gas and oil prices.

Last week, Marcos said he would serve as the secretary of agriculture temporarily after he takes office as the problem of food supply "is severe enough."

Managing inflation is also on the top of Marcos' to-do list. Government data showed that 23.7 percent of the country's nearly 110 million population lives in poverty.

The new administration will also inherit over 240 billion U.S. dollars in accumulated debt by the end of March, mainly due to the COVID-19 expenses. Bureau of Treasury data showed that the country's debt-to-GDP ratio stood at 63.5 percent as of end-March, well over the internationally recommended threshold of 60 percent.

"The priority is economy," Marcos said earlier this month, assembling his economic team to steer the economy.

The Philippine economy grew by 8.3 percent year on year in the first quarter of 2022. The government is optimistic that the solid first-quarter 2022 GDP growth will help the country attain its target of 7 to 8 percent growth this year.

In a speech early this month, Marcos vowed to foster "stronger and deeper" Philippines-China relations.

He said the relations with China are "very important" and "advantageous to both countries," while considering China as his country's "strongest partner" in pandemic recovery.

"We look forward to continuing fostering this relationship. Making it stronger. Making it deeper and to the advantage of our two great countries," Marcos said, adding that he sees the future of Philippine-China relations "developing in many ways."