WORLD Masks come to the fore as Europe relaxes lockdowns

Masks come to the fore as Europe relaxes lockdowns 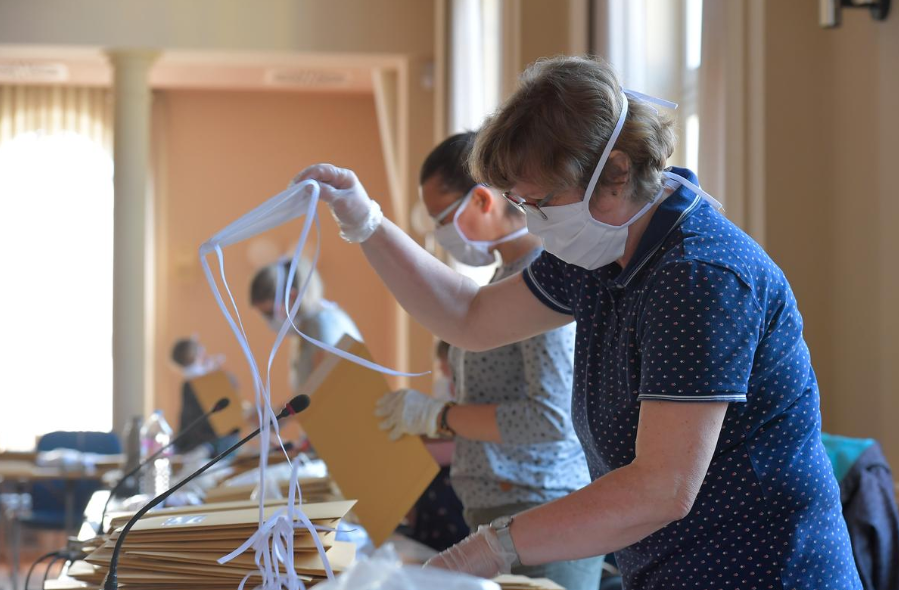 Employees of the city administration of Kamenz pack protection masks for sending by mail to the households of the city, as the spread of the coronavirus disease (COVID-19) continues in Kamenz, Germany, April 9, 2020. (Photo: Agencies)

Europeans have continued to edge toward an appreciation of face masks that was hitherto only seen in Asia, as more countries have either recommended their use or insisted upon it while relaxing the lockdowns brought in to combat the spread of the novel coronavirus and the COVID-19 disease it causes.

Starting Monday, passengers using the Eurostar rail service will not be allowed to board the high-speed train that connects the United Kingdom's capital with Belgium and France if they are without a face covering.

The company introduced the rule to comply with guidelines from the French and Belgian governments.

A company statement said any sort of covering will suffice "as long as it effectively covers your nose and mouth".

The decision follows the UK's prime minister, Boris Johnson, saying last week that face coverings "will be useful" when that nation eases its lockdown, details of which are expected soon.

The government of Scotland has already said people should wear face coverings while in shops or while using public transport.

France too has insisted people wear face coverings on public transport when that nation begins to ease its lockdown on May 11.

Europe's growing reliance on face masks comes in spite of World Health Organization pronouncements in the past that said the benefits of face masks can be offset if people get a false sense of security out of wearing them and fail to follow other social distancing rules and hygiene measures, such as keeping a safe distance from others, and frequently washing hands.

The BBC reports that the WHO says individual nations must weigh the pros and cons when deciding whether to order their populations to wear face coverings.

The Independent newspaper notes that, from Monday, face masks will also be compulsory on public transport in Spain.

Pedro Sanchez, the nation's prime minister, said 6 million face coverings will be distributed in transportation hubs and another 7 million given out by local governments.

On Saturday, the nation allowed adults to exercise outdoors for the first time in seven weeks, part of that nation's slow and incremental return to normal.

"These are small comforts that are coming in doses, and may appear insufficient, but are important," Sanchez said.

He added that the virus could easily flare again if people "let their guard down".

Neighboring Portugal has also moved toward a relaxation of its lockdown.

The Reuters news agency reports that Prime Minister Antonio Costa has overseen a sector-by-sector plan to ease restrictions he imposed six weeks ago.

Small shops, hairdressers, car dealerships, and bookshops will be allowed to open for the first time on Monday.

"We know this process has risks," he told national media. "We know that, as we open up various activities, the risk of transmission will increase … I will never be ashamed to take a step back if necessary for the safety of the Portuguese."

There too, face masks will be compulsory on public transport.

Lisbon has also urged people to continue to work from home, if possible.

Most sports will remain banned but the nation has said it may allow its top soccer league to resume matches and complete its season, although this will happen behind closed doors, if at all. The Health Ministry is considering the idea.

Grant Shapps, the UK's transport secretary, said on the BBC's Andrew Marr Show on Sunday that the nation's businesses could be asked to stagger employees' working hours when the lockdown there eases.

He said such a move would avoid some congestion on public transport and reduce the risk of the virus spreading.

"There are a series of different things that we can do, including staggering work times, and we are working with businesses and organizations to do that," he said.

Shapps added that he is also working with transport providers to see how safe distancing rules can be applied on trains and buses.

During the UK's daily news briefing on Sunday, little was said about the nation's plans for the eventual easing of its lockdown; an issue that will be revisited next week.

But Cabinet Office Minister Michael Gove said, when the lockdown is eased, frontline workers will need the right support, to "ensure the safest possible working environment" and must be backed by a robust testing and tracking system, and adequate personal protective equipment. Gove said that, so far, some 200,000 key workers have been tested for COVID-19.

And he said a new test-and-track system will be trialed in the coming days on the Isle of Wight.

"We have all learned to adapt and must carry on doing so after the prime minister sets out how we will get back to work later this week," he added.

Germany, meanwhile, allowed the resumption of religious services on Sunday, although they took place with "strict restrictions" in place, including limitations on numbers, prohibitions against physical contact, and a ban on singing.

The Guardian newspaper said services had been banned there since the nation brought in its lockdown in mid-March, and religious groups had applied pressure calling for their reinstatement.

Angela Merkel, the nation's leader, will meet religious leaders on Thursday to draw up a full set of rules to govern how religious services must be conducted.

Lothar Wieler, the head of the Robert Koch Institute, which is the nation's disease control agency, said last week that singing is as effective as coughing for spreading the virus.

"Evidence shows that during singing, the virus drops appear to fly particularly far," he said, while noting that people breathing deeply while singing are also particularly susceptible to infection.

But the German Bishops Conference has responded with a statement in which it said "if the distance rules are abided by, there is no reason why singing should be refrained from altogether," suggesting a disagreement may be brewing on that issue.