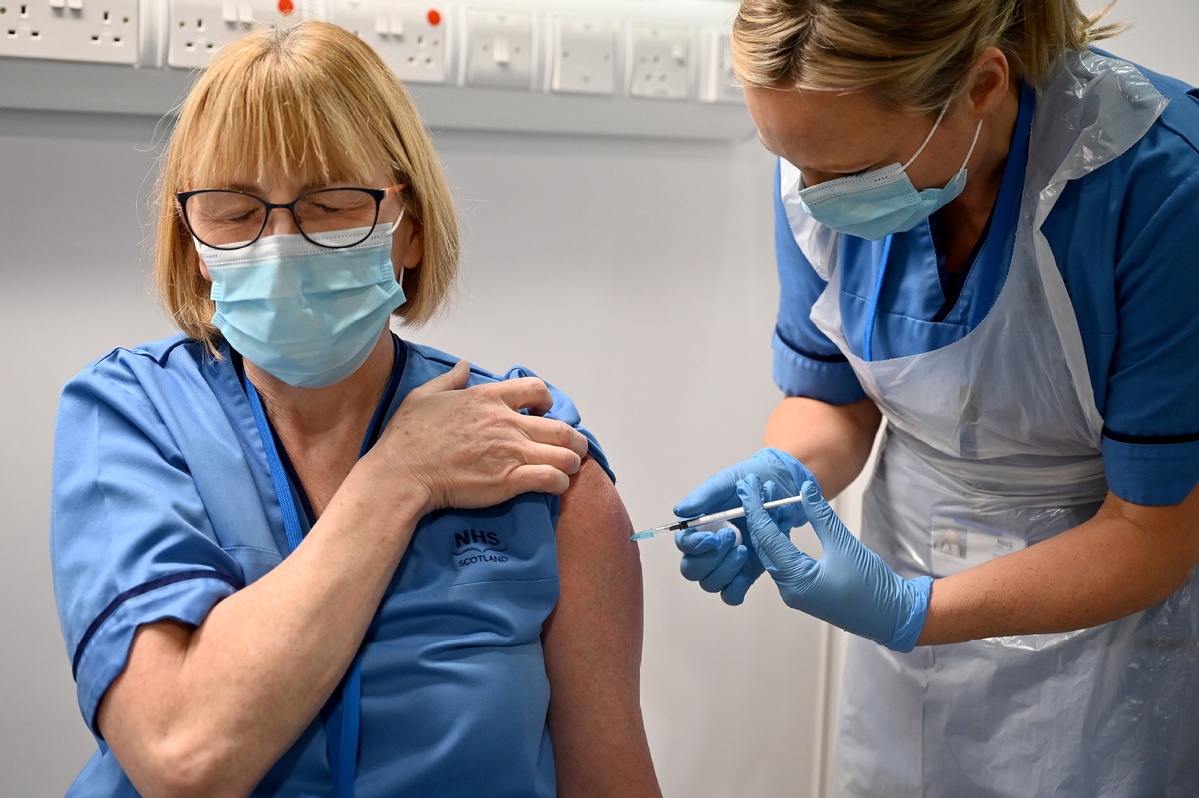 Grace Thomson receives receives the Pfizer/BioNTech COVID-19 vaccine from Paula McMahon, on the first day of the largest immunisation programme in the British history, at the Louisa Jordan Hospital, in Glasgow, Scotland, Britain Dec 8, 2020. (Photo: Agencies)

BEIJING - Amid surging COVID-19 cases worldwide, some countries are kicking off mass COVID-19 vaccinations after months of waiting, bringing hope to people in the pandemic-battered regions.

Over 68 million cases have been registered across the world, including more than 15 million cases in the United States as of Wednesday, according to Johns Hopkins University. Meanwhile, AFP tally showed that the total number of confirmed cases in Europe has surpassed 20 million.

Britain started its large-scale COVID-19 vaccination program on Tuesday, about a week after it became the first Western country to greenlight a COVID-19 vaccine. A 90-year-old retired shop clerk from Northern Ireland was the first to get a dose, and the process was closely watched around the world.

Also on Tuesday, the country recorded the highest number of weekly coronavirus deaths since May 15.

In Russia, mass vaccination program on Friday kicked off in the capital city of Moscow, the country's worst-hit region.

Sergei Sobyanin, mayor of Moscow, said on Monday that around 2,000 people from high-risk groups, including medical workers, teachers, and social services employees, have been injected with vaccine.

The nationwide vaccination is expected to start in Russia later this week, as President Vladimir Putin said on Dec 2.

Vaccination campaign in Mexico is also on schedule, with priority given to healthcare professionals and the elderly, according to Deputy Health Minister Hugo Lopez-Gatell.

The official said on Tuesday that vaccination should begin "in the last days of the third week of December", starting from the capital Mexico City, home to some 20 million residents, and northern Coahuila state.

In Israel, the government plans to vaccinate its population from Dec 20, state-owned Kan News quoted the director-general of the Israeli Health Ministry as saying, adding that medical staff are expected to receive vaccine even before that date.

Israel confirmed purchase of 8 million doses of the vaccine from the US pharmaceutical firm Pfizer last month.

Meanwhile, some campaigners are concerned that people from poor countries might be missed out in the distribution of vaccine.

"Nearly 70 poor countries will only be able to vaccinate one in ten people against COVID-19 next year" while rich nations representing just 14 percent of global population have bought up 53 percent of all the most promising vaccines so far, said the People's Vaccine Alliance, a coalition of campaigners, on Wednesday.

The alliance called on pharmaceutical firms working on vaccines to "openly share their technology and intellectual property through the World Health Organization (WHO)" to produce more vaccines.

WHO has been appealing for a fair and effective distribution of vaccines and leading the development of the Fair Allocation Framework, which advises that all countries should receive doses in proportion to their population size to immunize the highest-priority groups once a vaccine is authorized to use.

On Dec 3, the UN agency also quoted a report by the Eurasia Group as saying that leaving low- and lower-middle-income countries behind in distribution of vaccines might cause "significant economic damage that puts decades of economic progress at risk".