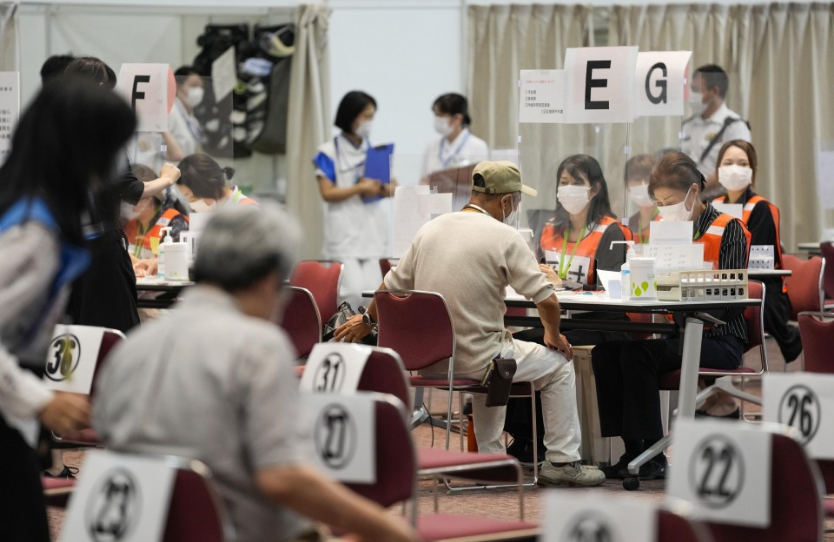 An elderly person undergoes procedures after getting a COVID-19 vaccine shot at a mass vaccination center in Osaka on June 14, 2021. Two state-run mass vaccination centers in Tokyo and Osaka began administering vaccines to elderly people from around Japan the same day, expanding the target areas from seven prefectures in the Tokyo and Osaka areas, as part of efforts to accelerate Japan's inoculation drive. (Photo: Agencies)

TOKYO, June 14 (Xinhua) -- Vacant slots at a mass vaccination center in Tokyo will be given to police, firefighters and those working for the coast guard among other officials, in addition to seniors, the Japanese government said Monday in a bid to speed up its slow COVID-19 campaign.

"We are targeting officials in charge of crisis management such as disaster response as a temporary measure to effectively utilize inoculation capacity," a Defense Ministry official was quoted by local media as saying.

At large, at state-run vaccination sites in Tokyo and Osaka, numerous slots have been left open by elderly people eligible to be vaccinated and making reservations yet not turning up, according to local media reports.

In a bid to not waste the slots, the government in addition to making the vacant slots available to seniors nationwide, will from Monday in Tokyo open up the slots to Self-Defense Forces personnel, members of the National Police Agency, Fire and Disaster Management Agency and the Japan Coast Guard.

The Tokyo center is capable of administering 10,000 jabs per day, while its equivalent in Osaka can give out 5,000 shots.

Local reports said that over 60 percent of the slots at the mass vaccination centers run by the SDF remain vacant for two weeks through June 27.

Meanwhile, companies and universities are also gearing up to pitch in.

Japan Airlines Co. on Monday began providing on-site COVID-19 vaccinations for its employees, a day after All Nippon Airways Co. started its own inoculation drive, becoming the first business in Japan to begin workplace vaccinations.

Both airlines started to administer the inoculations at Tokyo's Haneda airport, with crew on international flights being given priority for the jabs.

The government here, under heavy criticism for being the slowest among a number of advanced economies to rollout its vaccination drive, said that as of 5 p.m. Friday it had received applications for more than 9 million people to be vaccinated at 1,821 companies or universities.

Kato has said the new inoculation campaign is aimed at speeding up the country's vaccination rollout and help reduce the burden on local municipalities.

He said that the workplaces and universities will be in charge of deciding who gets vaccinated, although recommended that the elderly and those with underlying health conditions be given priority.