KATHMANDU, March 2 (Xinhua) -- A massive fire that broke on Tuesday morning has gutted around 40 houses at Dobhan Bazaar, a small town, in Taplejung district of eastern Nepal. 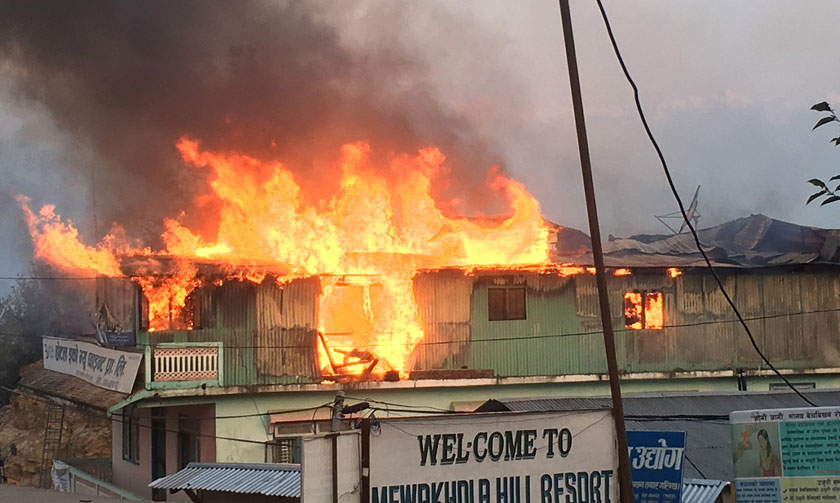 The fire that started from a cloth shop of local Bhola Poudel at around 8:30 a.m. local time spread rapidly, engulfing over half of the town within a few hours.

The houses were connected to each other which made the fire spread easily, Shiva Bhattarai, a local from the town whose brother's house was completely destroyed, told Xinhua over phone. "Most of the houses were constructed of wood and stones roofed with zinc sheets." He said different types of shops, hotels and a remittance center turned into ashes by the fire.

Hours of efforts from the local, security forces and a fire extinguisher from Phungling, the district headquarters, brought the fire under control after four hours, though it was not completely extinguished by 1 p.m. local time.

The incident site, which borders Meringden and Aathrai Triveni rural municipalities of the district, is the second biggest market after Phungling.

"This is a huge loss to our place," Ganesh Bahadur Limbu, chairperson of Mringden Rural Municipality, told Xinhua. "We are holding a meeting with the chief district officer, security forces and the local leaders to ascertain the actual loss." Limbu said, though property worth millions got destroyed, there was no loss to human life.