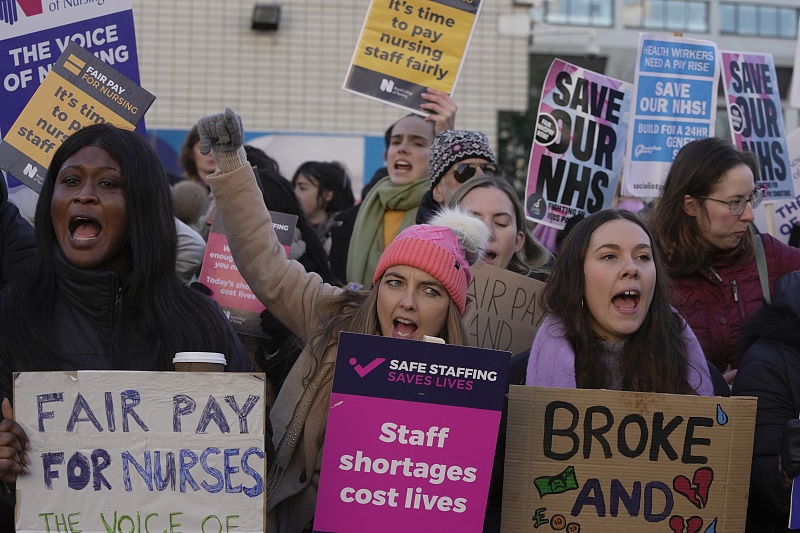 Nurses participate in a protest outside a hospital in London, December 15, 2022. /CFP

The United Kingdom (UK) faces weeks of massive strikes during the Christmas season by transport and postal workers, nurses, and border guards.

A wave of industrial action began on Tuesday, with more than 40,000 members of the National Union of Rail, Maritime and Transport Workers (RMT) walking out for 48 hours. Three more weeks of disruption are set to follow.

Britain's National Railway said due to various industrial actions, there will be a reduced train service until January 8, 2023, with "significant disruption expected across the rail network."

The Communication Workers Union (CWU) also said there would be strikes on December 23 and December 24, some of the busiest days for pre-Christmas deliveries.

Meanwhile, the Public and Commercial Service (PCS) union has announced that Civil Service industrial action in late December will impact Border Force services. Travelers who are planning to enter the UK during the proposed strike period may face longer waiting times at border controls.

Nurses have also joined the list of striking workers

"Up to 100,000 nursing staff are taking part in strikes in England, Northern Ireland, and Wales, and a further day of strike action is planned for December 20," said the Royal College of Nursing (RCN).

Gemma Dean, a human resources expert and lecturer at Liverpool John Moores University's business school said: "The industrial situation we're seeing at the moment, with a significant increase in strikes, has been something we haven't seen in the UK for a little while."

"What we're seeing right now are groups of workers going on strike or taking forms of industrial action that typically haven't done so. For example, ambulance drivers and nurses. Some of these groups have never gone on strike, so it is surprising to see that, but it may be reflective of the depth of feeling that employees have now about their pay and their terms and conditions of employment," said Dean.

The current high inflation rate in the UK and cost-of-living increases have put a lot of pressure on people, said Madeleine Stevens, a senior lecturer at Liverpool John Moores University.

Stevens told Xinhua in an interview: "I think the wave of industrial action we see now is not only a roller coaster effect from the rail strikes and the Royal Mail, and then it's kind of growing in momentum, but also with Christmas time coming people are feeling pressure and worries. It's driven by fear, which is very unpleasant."

There could even be further consequences than the strikes, Stevens said. "It could be more than just the public service sector that's struggling with pay awards and the cost of living. It impacts every single one of us. So there is a risk, if the demand for pay goes up, that it will have further implications for the wider community," she said.

Polling ahead of the nursing strike showed that a majority of Britons supported the action.