A massive storm blowing across the US spawned tornadoes that wrecked homes and injured a handful of people in parts of Oklahoma and Texas, including the Dallas-Fort Worth area, as much of the central United States from the Rocky Mountains to the Midwest braced Tuesday for blizzard-like conditions. 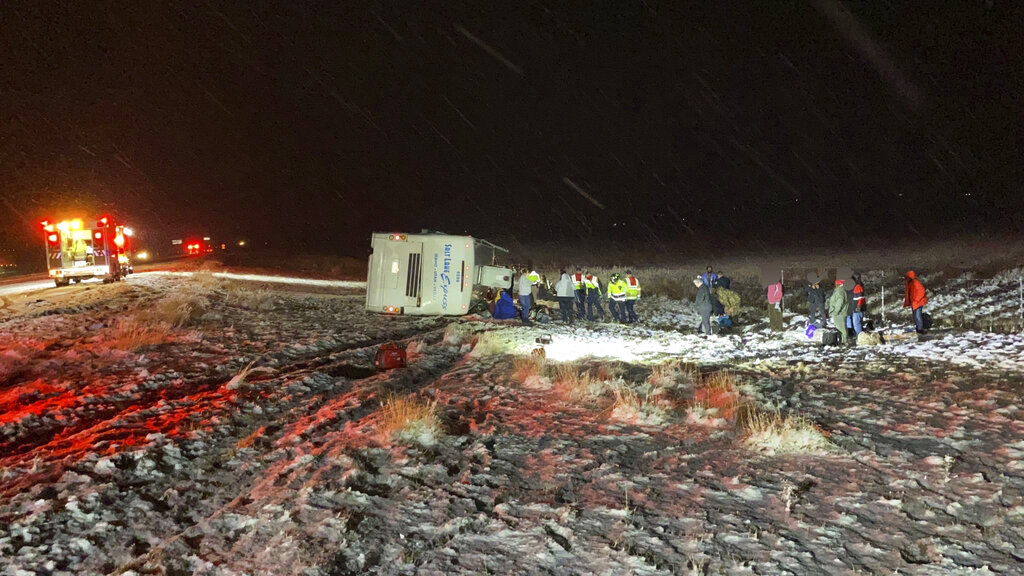 This photo provided by the Utah Department of Public Safety shows an overturned a Salt Lake express bus that had passengers when it overturned along eastbound on I-84 approximately 5 to 7 miles west of Tremonton, Utah, Monday, Dec. 12, 2022. (Photos: AP)

An area stretching from Montana into western Nebraska and Colorado was under blizzard warnings, and the National Weather Service said as much as 2 feet (61 centimeters) of snow was possible in some areas of western South Dakota and northwestern Nebraska. Ice and sleet were expected in the eastern Great Plains.

The storm system was expected to hobble the upper Midwest with ice, rain and snow for days, as well as move into the Northeast and central Appalachians with snow and freezing rain by late Wednesday, forecasters said. The severe weather threat also continues into Wednesday for Louisiana, Mississippi, Alabama and the Florida Panhandle, according to the Storm Prediction Center in Norman, Oklahoma.

In the South, a line of thunderstorms that moved across North Texas and Oklahoma in the early morning hours brought tornadoes, damaging winds, hail and heavy rain, said National Weather Service meteorologist Tom Bradshaw. Authorities on Tuesday reported dozens of damaged homes and businesses and several people injured in the suburbs and counties stretching north of the Dallas-Fort Worth area.

The weather service was examining about a dozen different areas across North Texas on Tuesday to determine if the damage was caused by high winds or tornadoes.

In the Fort Worth suburbs, photos sent by the North Richland Hills police department showed a home without a roof, a tree split in half, and an overturned vehicle in a parking lot. About 20 local homes and businesses were damaged, the police said.

In nearby Grapevine, police spokesperson Amanda McNew reported five confirmed injuries, but no fatalities and no life-threatening injuries.

“The main thing is that we’ve got everyone in a safe place,” McNew said just after noon. “And so now we’re starting the process of going through the city looking at damage to property, to businesses, homes and then roads to see what needs to be closed, what we can open and how soon we can open them.” 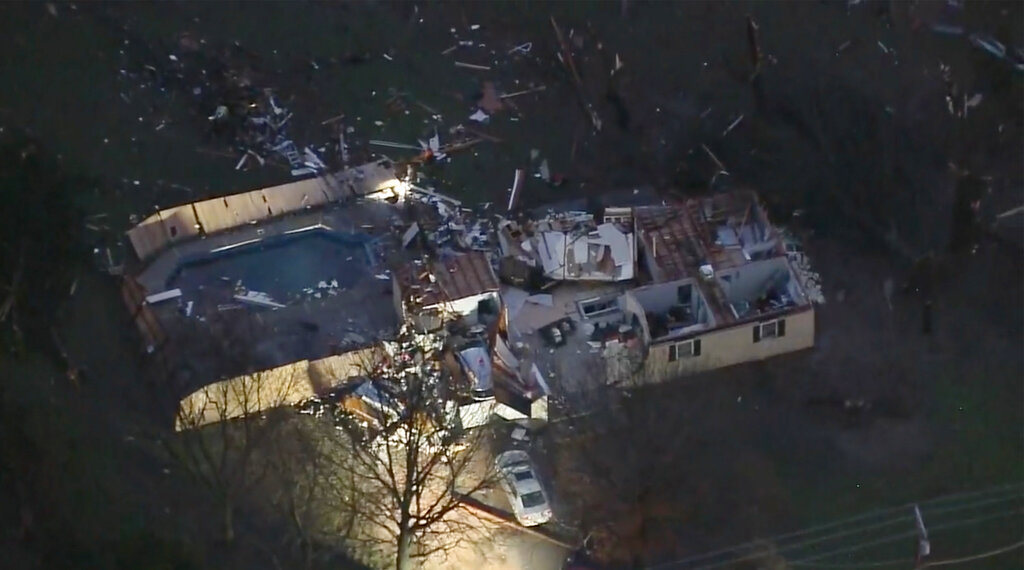 A structure is damaged after a tornado touched down in Wayne, Okla., early Tuesday, Dec. 13, 2022.

A tornado warning prompted the Dallas-Fort Worth International Airport, located near Grapevine, to issue a “shelter in place” order Tuesday morning, asking passengers to move away from windows, the airport announced via Twitter. More than 1,000 flights into and out of area airports were delayed, and over 100 were canceled, according to the tracking service FlightAware.

Meanwhile, a tornado damaged the Oklahoma town of Wayne shortly after 5 a.m. Tuesday. There were no deaths or injuries due to the tornado, McClain County Sheriff’s Capt. Bryan Murrell said. But authorities said there was widespread damage to Wayne, which is about 45 miles (72 kilometers) south of Oklahoma City.

National Weather Service meteorologist Doug Speheger said wind speeds reached 111-135 mph (179-211 kph) and the tornado was rated EF-2. It was likely on the ground for about two to four minutes, according to the weather service.

In parts of Iowa, Minnesota and South Dakota, the National Weather Service warned that up to about half an inch (2.5 centimeters) of ice could form and winds could gust up to 45 mph (72 kph). Power outages, tree damage, falling branches and hazardous travel conditions all threatened the region.

All of western Nebraska was under a blizzard warning from Tuesday through Thursday, and the National Weather Services said up to 20 inches (51 centimeters) of snow was expected in the northwest. Winds of more than 50 mph (80 kph) at times will make it impossible to see outdoors, officials said.

The Nebraska Department of Transportation closed stretches of Interstate 80 and Interstate 76 as heavy snow and high winds made travel dangerous. The Nebraska State Patrol, which was called to deal with several crashes and jackknifed semitrailers overnight, urged people to stay off the roads.

In Colorado, all roads were closed in the northeast quadrant of the state. The severe weather in the ranching region could also threaten livestock. Extreme winds can push livestock through fences as they follow the gale’s direction, said Jim Santomaso, a northeast representative for the Colorado Cattlemen’s Association.

“If this keeps up,” said Santomaso, “cattle could drift miles.”

In western South Dakota, a 260-mile (418-kilometer) stretch of Interstate 90 was closed Tuesday morning due to “freezing rain, heavy snow, and high winds,” the state's Department of Transportation said. Interstate 29 was also expected to close and secondary highways will likely become “impassable,” the department said.

Xcel Energy, one of the region’s largest electric providers, had boosted staff in anticipation of power outages.

A blizzard warning has been issued on Minnesota’s north shore, as some areas are expecting up to 24 inches of snow and wind gusts up to 40 mph. And in the south of the state, winds gusting up to 50 mph (80 kph) had reduced visibility.

National Weather Service meteorologist Melissa Dye in the Twin Cities said this is a “long duration event” with snow, ice and rain expected to last at least through Friday night. Minnesota was expecting a lull Wednesday, followed by a second round of snow.

Wet roadways are just as dangerous when temperatures hover around freezing, Dye said.

The weather is part of the same system that dumped heavy snow in the Sierra Nevada and western U.S. in recent days.