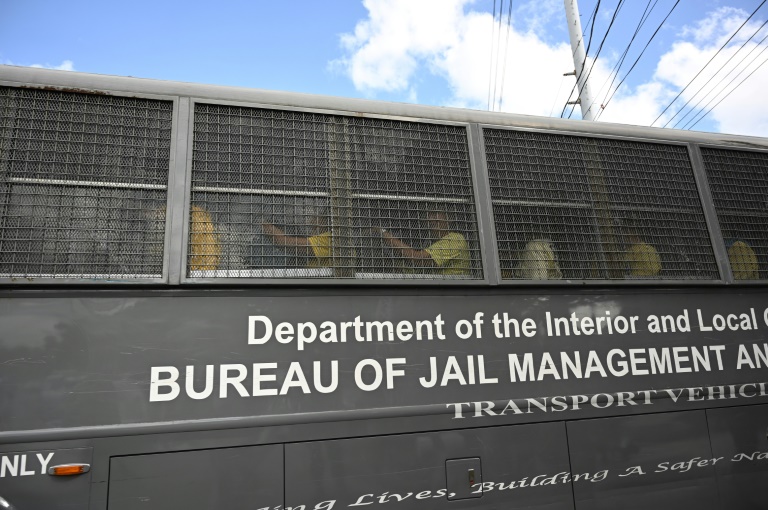 A bus carrying dozens of those convicted for their role in the Philippines worst political mass murder leaves court after the verdict. (Photo: AFP)

The masterminds of the Philippines' worst political massacre were found guilty Thursday of murder a decade after they led the killings of 58 people, rare convictions of powerful figures in a country notorious for its culture of impunity.

However with dozens of other accused gunmen acquitted, and 80 suspects never having been caught, relatives of the victims as well as rights groups gave a mixed response to the verdicts.

Leaders of the powerful Ampatuan family dynasty orchestrated the November 23, 2009, killings in a remote part of the conflict-plagued south of the Philippines in a bid to quash an election challenge from a rival clan.

Thirty-two journalists, travelling in a convoy to report on the filing of an Ampatuan rival's election candidacy, were among those murdered, making the killings one of the worst ever globally of media workers.

A Manila court on Thursday found 43 people guilty as principals or accessories to 57 of the murders.

They were found not guilty of the 58th murder because the body of the final victim was never recovered.

Andal Ampatuan Jnr, who had been planning to succeed his namesake father by running for governor of Maguindanao province, was among those found guilty of murder.

As principal suspects, Ampatuan Jnr and 27 others -- including seven of his relatives -- were each sentenced to at least 30 years in jail without parole.

"Their acts were deliberate and obviously in pursuance of their plan to kill," the court ruling read.

Fourteen members of the local police and a member of the Ampatuan family's armed militia force were sentenced to between eight and 10 years in prison as accessories.

However two clan leaders and more than 50 other police officers and alleged members of the Ampatuan militia were acquitted.

The cases against them had not been proved beyond a reasonable doubt, according to the court ruling.

"This makes us sad and happy at the same time, because (only) some of the major suspects were convicted," Esmael Mangudadatu, the Ampatuans' rival, told reporters outside the courtroom.

The massacre unfolded when Mangudadatu sent his wife and two sisters to file his candidacy for governor of Maguindanao province in an open challenge to the Ampatuans.

Gunmen blocked the convoy, which included the journalists, and herded them to a nearby hill where they were killed in a hail of gunfire and buried in mass graves, along with their vehicles, prosecutors said.

The Ampatuans had until then ruled Maguindanao and were allowed to build a heavily armed militia by then-president Gloria Arroyo to serve as a buffer against a long-running Muslim insurgency in the region.

The murders had cast a spotlight on the Philippines' notorious culture of impunity, in which powerful and wealthy politicians and businessmen often operate above the law.

Human Rights Watch Philippines researcher Carlos Conde described Thursday's events as "partial justice", citing the acquittal of more than 50 suspects and others remaining at large as the main concerns.

"The broader significance, however, of the guilty verdict of the principal Ampatuan suspects clearly indicate a victory for justice. This signifies to Filipino politicians that they will pay a price for abusing the rights of constituents."

"These people have won a great victory today, but they remain in danger," National Union of Journalists of the Philippines chairman Jose Espina told reporters in Manila.

Amnesty International regional director Nicholas Bequelin called the verdict "a critical step towards justice for victims of one of the worst killings of journalists in history," but called on Manila to find and prosecute the other suspects.

During the case's years of delays, patriarch Andal Ampatuan Snr and seven other defendants died, while some witnesses were murdered.

The Ampatuans remain a political force in the south.

Ampatuan family members won 25 local seats in May elections including Sajid Ampatuan, who was among those acquitted Thursday but did not show up in court. Sajid is one of Ampatuan Jnr's brothers.