The county and the Red Cross are opening seven shelters Tuesday on the islands of Maui, Molokai and Lanai.

Olivia is less than 200 miles (320 kilometers) east of Maui and heading west. It has maximum sustained winds near 55 mph (90 kph.)

The National Weather Service says Olivia is expected to drop 5 to 10 inches (12 to 25 centimeters) of rain in some areas.

Public schools on the Big Island, Oahu and Kauai will be open. 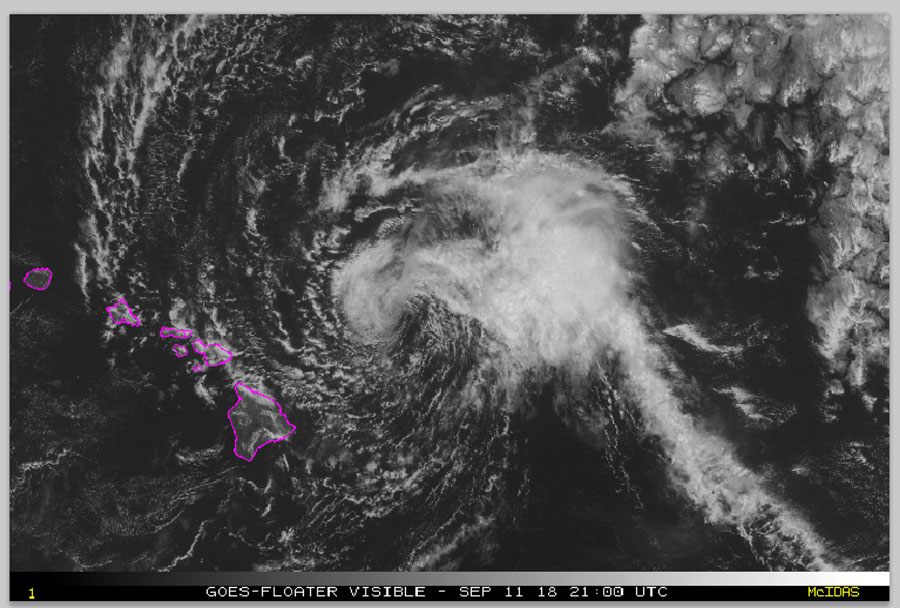 This satellite image made available the National Oceanic and Atmospheric Administration (NOAA) shows Tropical Storm Olivia east of the main islands of Hawaii at 11 a.m. Hawaii time Tuesday, Sept. 11, 2018. Central Pacific Hurricane Center meteorologist Matthew Foster says the storm could deposit 10 to 15 inches of rain on the islands, though some areas could get as much as 20 inches. [Photo: NOAA via AP]

The owner of the only hardware store in the small town of Hana on Maui's eastern side is determined to stay open as Tropical Storm Olivia approaches — so long as doing so doesn't jeopardize the well-being of staff.

Neil Hasegawa says people may need to buy tarps or screws or other items for their homes at Hasegawa General Store. He plans to open at the normal time on Wednesday, 7 a.m. He says he's waiting to see how bad the storm becomes.

Hana has a population of about 1,000. It's a popular day-trip destination for travelers staying in Maui's resort towns. But Hasegawa is encouraging visitors to stay home until the storm passes.

Honolulu Mayor Kirk Caldwell says his city's offices will be open as usual. City buses will also be running normally.

Ige said Tuesday the storm has the potential to cause widespread and catastrophic flooding and wind damage. He says it could trigger widespread power outages.

Ige is seeking help from military aircraft to fly people between islands if that becomes necessary. He's also asking for help with potential medical evacuations and emergency power generation.