Lava from the world's largest volcano is no longer an imminent threat to the main highway across the Big Island of Hawaii, scientists said Thursday, a development that was a welcome reprieve for motorists who depend on the road. 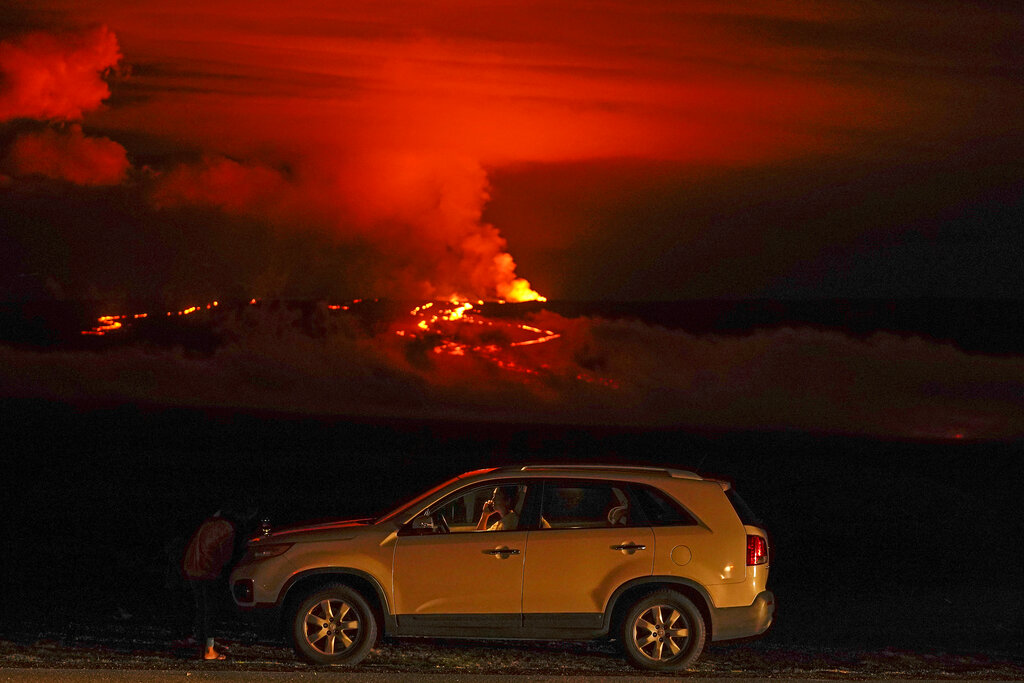 A man talks on a phone in his car alongside Saddle Road as the Mauna Loa volcano erupts Wednesday, Nov. 30, 2022, near Hilo, Hawaii. (Photo: AP)

Mauna Loa was still erupting Thursday morning, but the lava that was feeding the flow heading toward the crucial road has been cut off, likely because of a reduced production rate, said David Phillips, deputy scientist-in-charge at U.S. Geological Survey’s Hawaiian Volcano Observatory.

Lava from Mauna Loa, which began erupting Nov. 27 after being quiet for 38 years, was 1.76 miles (2.83 kilometers) from Saddle Road, also known as Route 200 or Daniel K. Inouye Highway, the U.S. Geological Survey said.

“So just to emphasize, there is no current threat to any island communities or infrastructure at this time,” Phillips said.

Last week, officials said the earliest the lava could hit the road was one week, prompting motorists to brace for upheaval from a possible closure that could add hours to commute times on alternate coastal routes. But, as expected, the lava slowed considerably in recent days as it moved across flatter ground, leaving scientists unable to estimate a clearer timeline.

Phillips said the active fissure is still generating lava flows, but they'll be localized around the fissure.

If there are additional flows in the channel, it's very unlikely that supply from the top will push the flow front ahead to become a threat, said Frank Trusdell, a geologist with the volcano observatory.

“So right now, we don’t expect that the new lava coming out on the surface to be able to replenish the supply to the flows that are closest to Daniel K. Inouye Highway,” he said.

Meanwhile, scientists were trying to understand why lava fountains were higher than usual overnight — a marvel noticed by people across the island, Phillips said. There wasn't a good estimate of size, he said, but the fountains were at least several hundred feet.

Some 20,000 vehicles have used a viewing route, which opened last week in an attempt to manage throngs of nighttime lava-gawkers, officials said.

Authorities were giving citations to people who, in an attempt to get a closer look, ventured onto prohibited areas. The state was “investigating people and companies who have entered the closed area and posted shots of themselves and lava flows on social media,” said a statement Thursday from the Department of Land and Natural Resources.

Native Hawaiian community members planned to be out along the highway Friday to ensure the area is free from garbage.

“And so as we do when we are preparing for the arrival of Pele, it is a practice for many of us to prepare our homes, prepare the areas where we live, and to make sure that that these areas are clean,” said Hawaiian cultural advisor Noe Noe Wong-Wilson, referring to the deity of volcanoes and fire.

For many Native Hawaiians, an eruption of a volcano like Mauna Loa has a deep yet very personal cultural significance.