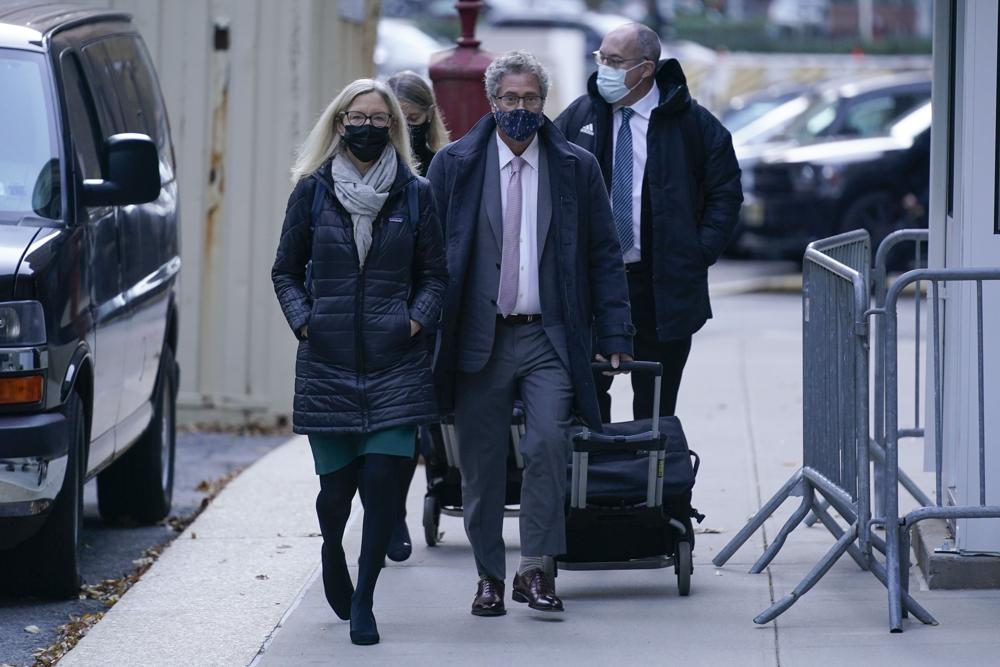 Ghislaine Maxwell and Jeffrey Epstein were “partners in crime” in the sexual abuse of teenage girls, a prosecutor said Monday, while Maxwell’s lawyers said she was being made a scapegoat for a man’s bad behavior as the British socialite’s sex trafficking trial got underway in New York.

Assistant U.S. Attorney Lara Pomerantz said at the start of Maxwell’s sex trafficking trial that the British socialite and Epstein enticed girls as young as 14 to engage in “so-called massages” in which sex abuse came to be seen as “casual and normal” after vulnerable victims were showered with money and gifts.

The prosecutor sought to make clear to a jury of 12 that there was no confusion about whether Maxwell, Epstein’s longtime companion, was his puppet or accomplice.

She described Maxwell, 59, as central to Epstein’s sex abuse scheme, which prosecutors say lasted over a decade.

“She was in on it from the start. The defendant and Epstein lured their victims with a promise of a bright future, only to sexually exploit them,” Pomerantz said, as U.S. Attorney Damian Williams looked on from a spectator bench.

Maxwell “was involved in every detail of Epstein’s life,” the prosecutor said. “The defendant was the lady of the house.”

Even after Maxwell and Epstein stopped being romantically involved, the pair “remained the best of friends,” Pomerantz said.

She said Maxwell “helped normalize abusive sexual conduct” by making the teenagers feel safe and by taking them on shopping trips and asking them about their lives, their schools and their families.

The prosecutor spoke from an enclosed plastic see-through box that allowed her to take off her mask as Maxwell, in a cream-colored sweater and black pants, at times wrote and passed notes to her lawyers.

When she finished, attorney Bobbi Sternheim said her client was a “scapegoat for a man who behaved badly,” just like so many women all the way back to Adam and Eve.

She called Epstein “the proverbial elephant in the room.”

“He is not visible, but he is consuming this entire courtroom and overflow courtrooms where other members of the public are viewing,” she said.

Sternheim said the four women who would testify that Maxwell recruited them to be sexually abused were suffering from quarter-century-old memories and the influence of lawyers who guided them to get money from a fund set up by Epstein’s estate after his August 2019 suicide in a Manhattan federal jail as he awaited his own sex trafficking trial.

The lawyer said “accusers have shaken the money tree, and millions of dollars have fallen their way.”

The openings set the scene for a six-week trial that Maxwell settled into with frequent gazes at her sister in the front row of a spectator section diminished in space by coronavirus restrictions.

Maxwell — who once dated the financier — is accused of acting as Epstein’s chief enabler, recruiting and grooming young girls for him to abuse. The charges against her stem from the allegations of four women who say she and Epstein victimized them as teens from 1994 to 2004.

Pomerantz said the abuse occurred at Epstein’s homes, including his estate in Palm Beach, Florida; his posh Manhattan townhouse; a Santa Fe, New Mexico, ranch; a Paris apartment; and a luxury estate in the Virgin Islands.

The government’s first witness was Lawrence Paul Visoski Jr., who worked for Epstein starting in the 1990s as a pilot on the private jets that shuttled Epstein, Maxwell and others between his various homes.

A prosecutor had Visoski start by describing the layout of the New York residence that he regularly visited to pick up luggage and do other chores. He was to return to the stand Tuesday.

Authorities charged Maxwell in July 2020, arresting her after tracking her to a $1 million New Hampshire estate where she had been holed up during the coronavirus pandemic.

Maxwell has pleaded not guilty and vehemently denies wrongdoing. She has been jailed in Brooklyn since her arrest, calling the claims against her “absolute rubbish.” Maxwell’s lawyers and family say she was Epstein’s pawn, now paying “a blood price” to satisfy public desire to see someone held accountable for his crimes.

The wealthy, Oxford-educated Maxwell is the daughter of British newspaper magnate Robert Maxwell, who died in 1991 after falling off his yacht — named the Lady Ghislaine — near the Canary Islands. Robert Maxwell, whose holdings at the time included the New York Daily News, was facing allegations that he had illegally looted his businesses’ pension funds.

Ghislaine Maxwell holds U.S., British and French citizenships and was repeatedly denied bail in the run-up to her trial.