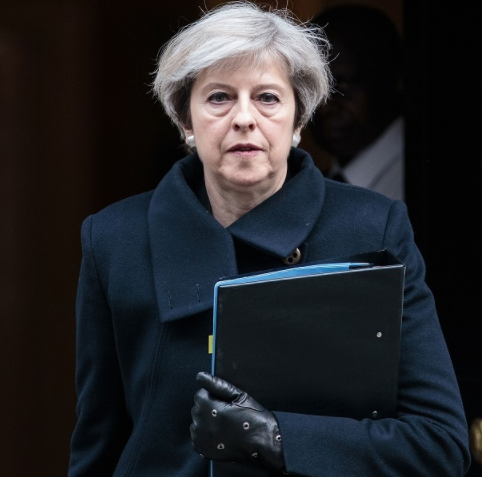 LONDON, Nov. 27 (Xinhua) -- British Prime Miniser Theresa May on Tuesday embarked on an election-style campaign across the country, leaving behind a hostile House of Commons, which will cast the make-or-break vote on her Brexit deal on Dec. 11 after five days of debate by members of parliament.

The prime minister on Tuesday morning headed to Wales before her trips to Northern Ireland and Scotland later this week, followed by travels in England in a week's time after she returns from the Group of 20 summit in Argentina.

With the beginning of the two-week campaign, May is applying circuitous tactics by going over the heads of members of parliament to appeal directly to the whole nation to back her Brexit deal, which won formal endorsement by the 27 leaders of the European Union (EU) member states.

Downing Street believes a direct appeal to voters will help get her controversial deal through the parliament, where 90 Tory members publicly stated that they will vote against the EU-UK agreement on how Britain will leave the regional bloc on March 29 next year.

As things stand, May knows she faces defeat when the deal comes before the House of Commons next month as enemies on all sides gang up on her.

The "meaningful vote", as described by the British government, is believed to be the most significant in the United Kingdom in more than half a century since the House of Commons decided in 1971 to join the EU.

In fact, it is members of parliament, not voters across the nation, who will cast the "meaningful vote."

May's strategists hope that by stirring up a supportive public mood, they can force the politicians to shut out the tearoom chatter in Westminster and help her deliver Brexit in her own way.

In the upcoming vote, there is only one candidate -- the prime minister herself, and only one policy -- the Brexit deal. May has repeatedly ruled out a second referendum, "Plan B" and any possible amendments to her Brexit plans.

The prime minister asked the members of parliament to "listen" to their constitutes who are fed up with Brexit and want to "move on."

Meanwhile, the prime minister also wrote an open letter to the British people imploring voters to put pressure on wavering members of parliament to back her.

She hopes it might just give her the numbers she needs to get her Brexit plans through a divided parliament and reunite a warring nation.

"We will then begin a new chapter in our national life. I want that to be a moment of renewal and reconciliation for our whole country," she said in the letter. "It must put aside the labels of 'Leave' and 'Remain' for good and we come together again as one people."

Faced with a risk of a heavy defeat in the parliament, the prime minister urged all her cabinet to join her in trying to sell the deal.

In her previous efforts, she also tried to win over members of parliament by mobilizing public and business opinion in favor of her Brexit deal.

"My deal delivers for every corner of the UK and I will work hard to strengthen the bonds that unite us," she said.