May faces more Brexit woes after another UK minister quits 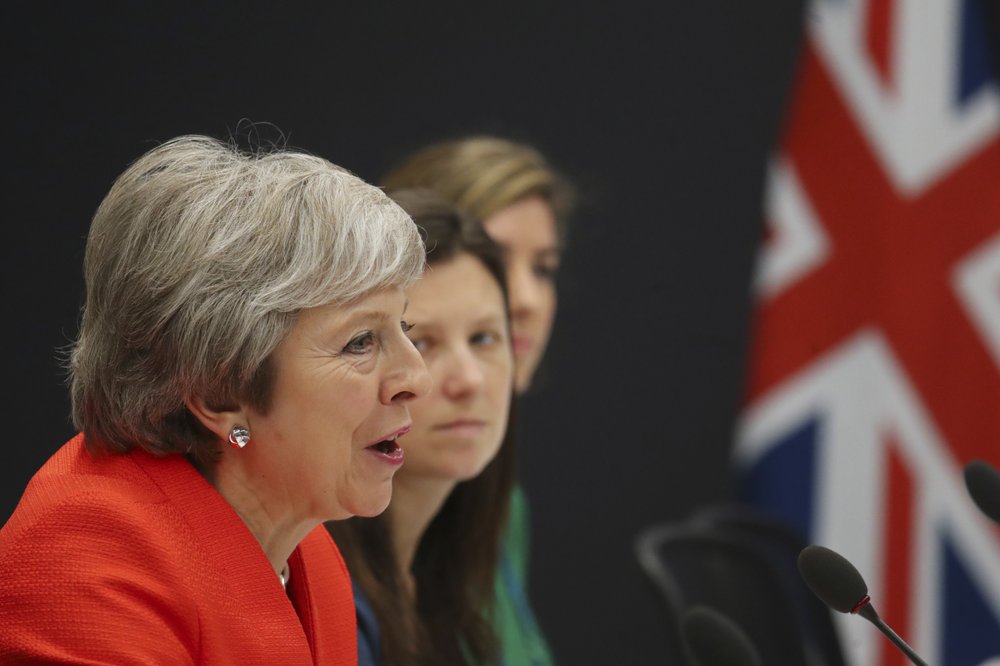 The latest minister to quit British Prime Minister Theresa May’s government because of Brexit said Saturday that the prime minister’s divorce agreement with the European Union would leave Britain outnumbered and outmaneuvered in future negotiations.

Ex-Universities and Science Minister Sam Gyimah likened the deal to playing soccer against opponents who “are the referee and they make the rules as well.”

May is battling to persuade British lawmakers to back the Brexit agreement when Parliament votes on it Dec. 11. She and EU leaders say rejecting the divorce terms, which were endorsed by the EU last weekend, would leave the U.K. facing a messy, economically damaging “no-deal” Brexit on March 29.

But many British lawmakers on both sides of the Brexit debate oppose the deal — Brexiteers because it keeps Britain bound closely to the EU, and pro-EU politicians because it erects barriers between the U.K. and its biggest trading partner.

The two-part agreement includes the legally binding terms of the U.K.’s departure and an ambitious but vague declaration about future relations between the two sides.

Gyimah, who backed remaining in the EU during Britain’s 2016 referendum, said the agreement was “a deal in name only.”

“We’ve got a wish-list of aspirations that we intend to negotiate with the EU (after) we’ve lost our voice, our veto and our vote,” he told Sky News.

Gyimah is the seventh member of May’s Conservative government to quit over the Brexit deal. His resignation came after May said Britain was abandoning efforts to retain full access to the EU’s Galileo satellite navigation system after Brexit.

Britain has been a major player in developing the system, but the EU says only member states can work on developing the high-security encrypted parts of Galileo for use by the military and critical infrastructure sectors.

May said, given the EU’s decision “to bar the U.K. from being fully involved in developing all aspects of Galileo, it is only right that we find alternatives.” She said Britain would develop its own sat-nav system, at an estimated cost of several billion pounds (dollars).

Gyimah said “what has happened with Galileo is a foretaste of the brutal negotiations we will go through that will weaken our national interest, make us poorer, less secure.”

May has acknowledged the Brexit deal is not perfect, but says it delivers on voters’ decision to leave the EU while retaining close ties with the bloc, a key trading partner and ally.

She got a vote of confidence Saturday from Japanese Prime Minister Shinzo Abe, who praised May’s “leadership” in sealing the Brexit agreement.

Speaking at the G-20 summit in Buenos Aires, Abe urged May “to avoid no deal, as well as to ensure transparency, predictability as well as legal stability in the Brexit process.”

Japanese automakers Honda and Nissan have warned that new tariffs or other trade barriers with the EU would damage their competitiveness of their British factories, which employ thousands of people.

May also received support from Environment Secretary Michael Gove, a key Brexit-backing minister, who wrote in the Daily Mail newspaper that lawmakers should back the deal rather than hold out for a “perfect plan.”

“Does the deal deliver 100 percent of what I wanted? No. But then we didn’t win 100 percent of the vote (in the referendum),” Gove wrote. “In politics, as in life, you can’t always get everything that you want.”

The Bank of England warned this week that leaving the EU without a divorce deal could plunge Britain into its deepest recession in nearly a century, with the economy shrinking 8 percent within months as unemployment and inflation soared.