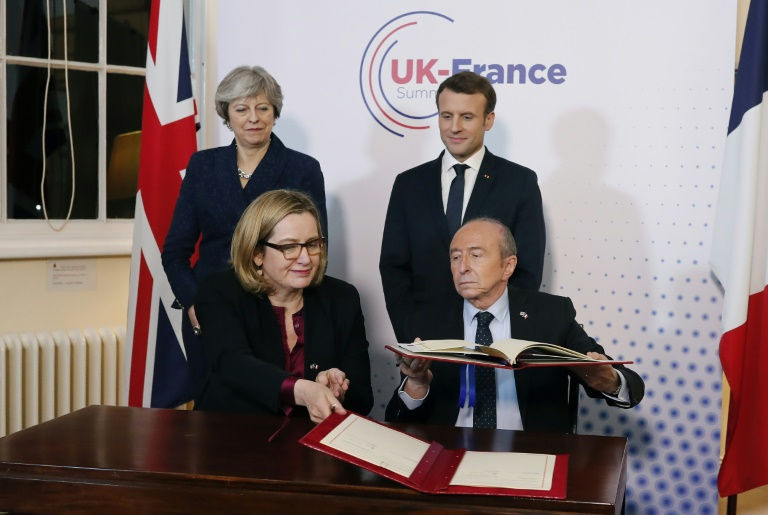 The British and French interior ministers, Amber Rudd amd Gerard Collomb, sign the new border security accord as Theresa May and Emmanuel Macron look on approvingly

Prime Minister Theresa May and her French counterpart Emmanuel Macron agreed a new border security deal on Thursday, through which the UK will pay more to France to stop migrants trying to reach British shores.

May also confirmed the loan of the Bayeux Tapestry from France, a historic work depicting the Norman conquest of England which she said would come to Britain in 2022 for the first time in over 900 years.

The two leaders meeting for wide-ranging talks at the Sandhurst military academy near London, agreed that the UK will pay an extra £44.5 million (50 million euros, $62 million) for fencing, CCTV and detection technology in Calais and other Channel ports.

"The further investment we have agreed today will make the UK's borders even more secure," May said during a joint press conference with Macron.

While the two countries cooperate closely in numerous areas, including intelligence and defence, differences over migration have strained ties.

The money will be on top of more than £100 million already paid by Britain, following a request by Macron to contribute more cash.

The 35th UK-France summit came as Britain tries to strengthen bilateral ties before leaving the European Union in March 2019.

May said she was "honoured" by the loan of the Bayeux Tapestry and Macron said he hoped it would open "a new chapter" for cultural and scientific co-operation.

"We are somehow making a new tapestry together," Macron said, rejecting any suggestion that it was intended to remind Britain of a victorious France.

The loan has been met with opposition by French experts who have warned about the delicate state of the 70-metre (230-foot) long embroidery.

The UK-France summit came as Britain tries to strengthen bilateral ties before leaving the European Union in March 2019.

The French flag was raised over the military base and the French national anthem played out for the arrival of May and Macron, who were greeted by a guard honour and a flypast of two planes.

They earlier visited the Michelin-star Royal Oak pub in May's Maidenhead constituency, where they had a "convivial" lunch together according to a British source.

While Brexit was not scheduled for formal discussion, Macron said Britain's decision to leave the European Union would lead to some "short-term uncertainties".

Macron also said that Britain could have "no differentiated access to financial services" if it decides to leave the European single market.

Otherwise, Britain would have to pay into the EU budget.

"There shall be no hypocrisy in this respect... otherwise we would destroy the single market," he said.

The French president stressed that the new border agreement was a bilateral accord, separate from any EU divorce deal, aimed at managing the sensitive of immigration as hundreds of people continue to camp out in Calais.

The two countries currently abide by the 15-year-old Treaty of Le Touquet, which permits immigration checks within each other's borders.

The new treaty signed at Thursday's summit was intended to complement the 2003 deal, according to French officials.

In addition to more funds from Britain, the two sides agreed to "improved treatment" of child refugees which Macron said would see their paperwork processed within 25 days.